Pounds of cheese at the Gluttony Gauntlet 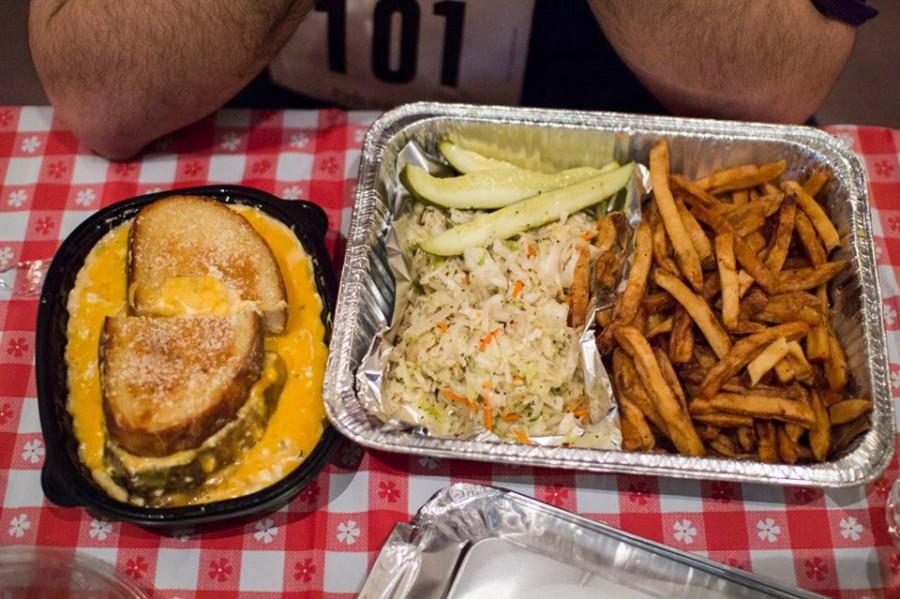 This photo shows food similar to that served at Gluttony Gauntlet this year.

Saturday, Feb. 20, an eating contest was sponsored by University Program Board (UPB) that showcased three distinct abilities that the various contestants had to put on display: food endurance, relay skills and accuracy abilities (tested by a Cheeto toss).

There was a planned fourth skill test involving speed and hot dogs, but according to UPB members the task was removed “due to a lack of interest.” But as promised, the gauntlet was still one of the most exciting and terrifying food-related experiences most people will ever experience.

The event was clearly not to be undertaken lightly, as volunteer Emergency Medical Services members were on standby if anything went wrong. After watching the Melt Challenge, I am not surprised they were there.

Groups of contestants, consisting of either individual friends or fraternities (specifically Fiji and Delta Chi) competed against each other. The first event that put the contestants to the test was the relay skill event, during which several groups consisting of four contestants apiece were given a salad, a hamburger from Jolly Scholar, a pint of ice cream and three glasses of lemonade per contestant. The groups were pitted against one another as well as a time limit, and once the event officially started, the gluttony began.

The speed at which every contestant managed to eat their respective food was beyond comprehension, although there were a few groups that took their time with the food, as they soon realized that it was more than they bargained for. At the end, it was a Delta Chi group that won with its speed eating dynamics.

Following their leave, a few UPB members did inquire about the food providers, stating that “several of the food providers here on campus did indeed make and provide the food necessary for this event, including Melt and Jolly for the events about them.”

Those not participating were able to eat some food at a nacho bar placed near the main competition table, although it might not have been a wise decision, as what followed was the Melt Challenge. Consisting of numerous trays containing sandwiches smothered in various cheeses and an abundance of fries, the winner and runner-up was decided based on who ate the most pounds from each tray of food.

The display of this event was something to behold, as mounds upon mounds of cheese, bread, pickles and fries were piled on the table and eaten with gusto. However, it was off-putting and may have made some spectators doubt their ability to eat, let alone comprehend another Melt meal. In the end, the winning prizes here were an Amazon gift card for the winner and a food gift card for the runner-up.

Overall, the event showed how much the human body is capable of taking in terms of excess food, but it was also terrifying in terms of what was being eaten, what with cheese-smothered sandwiches and rapid eating of many items within minutes or seconds. Regardless, it was a great deal of fun to see, but certainly not something that should be taken up unless the contestant is up to the task and serious about eating.