Going green: how sustainable is CWRU? 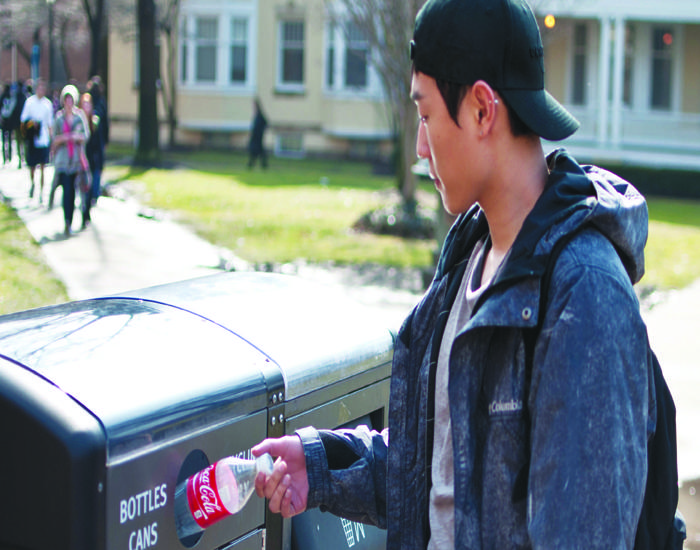 By now Case Western Reserve University students have grown familiar with the giant wind turbine towering over Van Horn field and the catchy slogans stamped around the dining halls with terms like “fresh,” “locally grown,” and “sustainable.” But how much of this effort translates to real-life sustainability? Which endeavors are making their way to our residences halls, our plates, and our budgets?

“We don’t have the largest budget for sustainability programs,” said Elena Stachew, president of the Student Sustainability Council (SSC). “A lot of students think that we are touting ourselves as the most sustainable school… We do have some technologies here that some schools don’t have, and we do have very visible technologies, [like] the wind turbine, the LEED [Leadership in Energy and Environmental Design] certified Village, and some porous concrete,” she said.

CWRU has recently added new coordinators to address sustainability. “We now have a recycling coordinator for this university, which was much-needed,” said Stachew. The new director of sustainability, Stephanie Corbett, joined the university last summer, and CWRU added recycling manager Erin Kollar in January 2012. “This is the first time we have a budget for sustainability purposes,” Stachew said.

As part of SSC’s effort to increase recycling around campus, Recyclemania has been reporting pounds of waste and pounds of recycling each week since the beginning of February. After its first week, CWRU reported 120,000 pounds of garbage, and only 8000 of recycling. “So not much of a dent,” Stachew remarked.

SSC is also conducting a recycling bin audit of the entire campus to assess whether buildings need more bins. “Our recycling rates aren’t too high,” said Stachew; CWRU recycling rates average between 10 and 20 percent. That is worse than the state of Ohio, which on average has around a 29 percent recycling rate. Ohio was also ranked the number-one “least green state” in the country, according to the Huffington Post last June.

But SSC’s attempts to increase recycling have made a noticeable impact. Labeling recycling bins by materials has been an efficient strategy for improving recycling rates on campus, Stachew noted. Only two custodial staff members have been appointed to take the lead on labeling all of the bins around campus, but Stachew sees this as an effective short-term solution. “We just don’t have a big budget for sustainability,” she said.

The SSC plans to partner with Thwing Tuesdays, Springfest, Thwing Study-Over, and Spot Night to spread sustainable practices across campus events and to educate others. They hope to tackle more well-attended events and create a stable recycling system in The Spot.

“The biggest part of this thing is educating,” said Stachew. “Big technology is good, but educating is free… And all of that [technology] does good, [but] the most basic aspect is recycling.”

Behind the scenes, the Office of Housing, Residence Life, and Greek Life has also been fueling the green frenzy. “[Sustainability is] a very important part of the mission of the university, as well as something we value a great deal in our office,” said Todd Rasmussen, associate director of Housing and head of its sustainability committee. Lately it has been combining students and staff to develop their own sustainability committee, and they are hosting speakers who specialize in sustainability to educate staff in lectures and discussions.

“Whenever we do a project, we try to evaluate how we can improve our sustainability efforts,” said Rasmussen, a firm supporter of Recyclemania and CWRU’s sustainability goals. “We just finished a recycling bin audit to find out what we had and where we had it. We are now in the process of evaluating that and analyzing [the] data to determine how we can better allocate our resources in the best manner to facilitate recycling efforts.”

The Office of Housing, Residence Life, and Greek Life is also working to cut down on the burden of waste. “There is a cost to trash,” said Rasmussen, implying a monetary cost. “Obviously if we can reduce that and divert to recyclables, that’s less money that were spending on putting trash in the landfill… The university generates a minimal profit for recycling, but that is also offset by a reduction in costs for sending items to the landfill.”

The Office of Housing, Residence Life, and Greek Life is also brainstorming new and innovative ideas to encourage students to incorporate sustainability into their everyday lives in the residence halls.  One example is an effort to develop a “green your room” certification process, in which students pledge to abide by certain green standards and achieve various “green certification” levels.

“We’re hoping that could be educational for students, and help improve everyone’s sustainability awareness,” said Rasmussen.

At the forefront, Bon Appetit continues to help CWRU achieve its sustainability goals, especially relating to the university farm. CWRU’s farm has been gaining popularity and is planning to launch its first Community-Supported Agriculture (CSA) program beginning this summer, offering locally grown produce from the university farm and local farmers on campus.

“We’re really excited and happy about our ongoing partnership with the [university] farm,” said Beth Kretschmar, Bon Appetit’s marketing manager. “We work closely with the…farm. We recently helped fund a transportation vehicle for them so that the farm can load their fresh produce here to campus.”

The partnership aims to find more ways to utilize the farm for sustainability. “We also do a composting program for all cafes on campus, [where we] send all compostable materials to the farm,” Kretschmar added.

Bon Appetit has recently enacted groundbreaking animal welfare policies that will carry over into Bon Appetit’s management at CWRU. “We’re really excited about our new policies that we’re beginning to practice, and everything will be phased in by the end of 2015,” said Kretschmar.

Bon Appetit also actively promotes sustainability education at the school with their annual Low-Carbon Diet Day, which usually coincides with Earth Day, which will be held on April 19 this year. “One third of our global emissions are due to food supply,” said Kretschmar. “The goal of the Low-Carbon Diet Day is to make our customers aware of the connection between food and climate change.”

Bon Appetit also addresses the minute yet crucial details, crafting new ways to improve responsible use of disposables in both dining halls and take-out eateries. “We try to put materials out there to ‘taste not waste,’” Kretschmar said. “We went tray-less here on campus years ago to try to prevent waste. We just try to [teach] students that you can always come back for more.”