Golden Guernsey Milk is Back 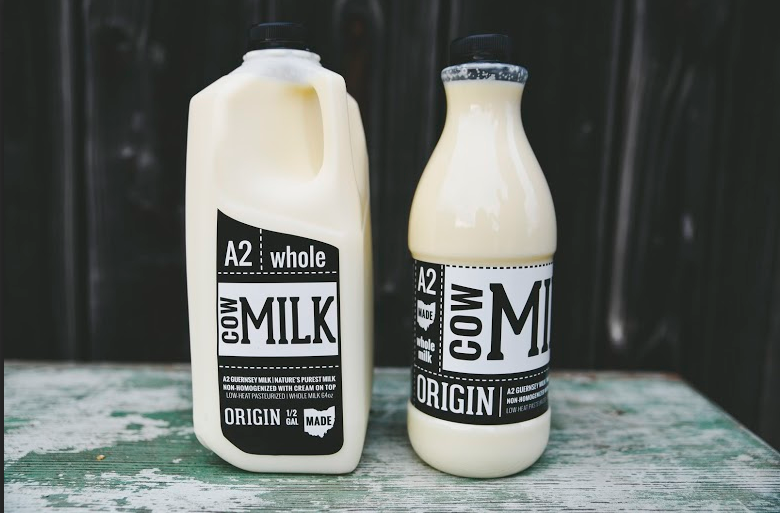 Adrian Bota, the owner of Piccadilly, launches a starup company that sells Golden Guernsey milk, which contains more nutrients than the A1 milk that is currently sold in many grocery stores.

A few weeks after I arrived in the United States from Nepal, I had difficulty digesting milk. My parents experienced similar difficulty when they were here to visit me. I interpreted this experience as being the result of change in the environment. I never imagined it may have something to do with the cows.

In Nepal, we grow up drinking milk from cows that are known to produce A2 milk. In the U.S., dairy industries mainly use Holstein cows, a breed of dairy cattle, that produce A1 milk. A2 milk, however, is produced by Guernsey cows. These latter cattles produce yellowy creamy milk (30 percent more cream) that contain A2 protein. According to World Guernsey Cattle Federation (WGCF), this milk has more Vitamin D (33 percent more), Vitamin A (25 percent more), Calcium (15 percent more), and protein (12 percent more) than average milk.

In addition to being rich in nutrients, A2 milk with higher level of beta-casein is beneficial for people with lactose intolerance. While the evidence is disputed, some research studies also suggest its role in lowering the risk of heart disease and type 1 diabetes.

Adrian Bota, 33, the owner of Piccadilly yogurt and ice cream shops in Cleveland and Cleveland Heights, is re-introducing what he calls “A2 milk” through his startup company “Origin Milk.”

Known as Golden Guernsey milk, A2 milk used to be sold in America up until 1950s or 60s, Bota introduces. Like the milk from humans and goats, originally all cow milk used to contain A2 protein. Asian cows including the ones from India — whose milk I grew up on — produce A2 milk.

After eight years in the US, I have grown accustomed to A1 milk, but drinking A2 milk reminds me of rich and creamy milk that cows in my village used to produce.

Bota uses A2 milk in the dairy products that he sells at Piccadilly yogurt and ice cream shops. Sensing the market for the milk with potential health benefits, he launched A2 milk (cost of half-gallon is $5.99) in Constantino’s, Heinen’s, Mustard Seed Market, Giant Eagle Market District, and Whole Foods.

Expansion of dairy industry put increasing pressure on farmers to raise milk production. That resulted in the preference for Holstein cows and led to the decline in production of Guernsey milk.

Consequently, Bota says, A1 milk became a norm. To become more efficient and to produce cheaper milk, big industries concentrated their farms in a few places, using those as a base to transport milk from one place to other. According to a study by Jill Clark and her colleagues at the Ohio State University, Ohio alone lost 2510 small dairy farms (with<200 cows) between 1995 and 2006.

His company intends to change that dynamic. Naturally.