Gram, her garden and the new generation 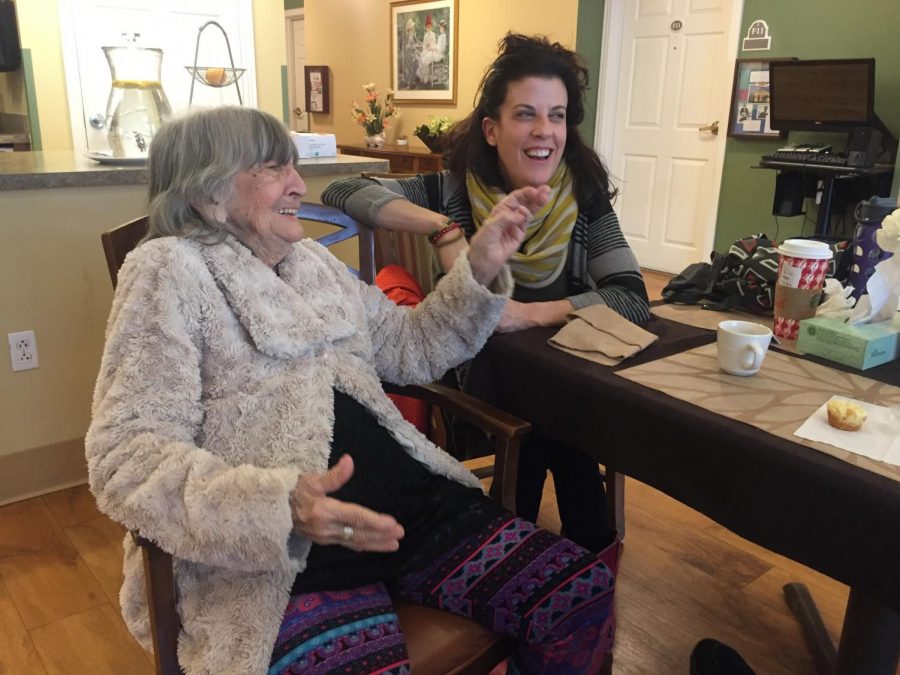 The small garden on Cornell Road looks a little different this winter. Usually it would be decked out for Christmas, but instead strings of plastic autumn leaves and cheerful fake flowers remain, a contrast to concrete, brick and snow. The local landmark in Little Italy is missing its creator and caretaker, and the neighborhood can’t help but stop and notice her absence.

The autumn garland peeking through the snow invokes a familiar memory of years past. One fall day in 2016, Reta Fiorelli sat in her garden in Little Italy, just as she had done every day for years. Surrounded by the colorful flowers and decorations that make her yard a local landmark, she was looking up at the few clouds that hung still in the sky.

That was a typical day for Fiorelli. She made coffee, did her makeup, chose a purple outfit to match the streak in her hair and came out to sip her coffee at the metal table squeezed in in front of the apartment building she’d owned since about 1977. In the afternoon, she brought out some of her famous homemade pizzelles, snowflake-shaped Italian sugar cookies. While she ate, she enjoyed the sunlight and thanked passers-by who stopped to compliment her decorations, as they always did.

More recently, shortly after her 91st birthday in Nov. 2018, Fiorelli once again sat by a table, drinking coffee. This time her fuzzy beige jacket and undyed silver hair fit in with the calming yellows, greens and whites of the nursing home. Next to her sat her granddaughter, Jennifer Coakley, whom Fiorelli had partly raised after her mother, Fiorelli’s daughter, died of breast cancer. Coakley speaks loudly to her “Gram,” enunciating each of her syllables and encouraging her to remember their shared history, no matter how fragmentary the recollections.

Just over a year after she had sat out in her yard, eating pizzelles and watching the clouds, Fiorelli fell. It was Oct. 30, 2017. She was conscious and uninjured, but she couldn’t get up, so an ambulance came. After the hospital, she spent two weeks at a rehabilitation center where they asked her questions to test her memory and led her through exercises to rebuild her strength and reflexes—simple tasks like hitting a balloon.

She was so mad to be taken out of her home that she kept her bedroom door closed for the entire two weeks. When she was released home, though, things were still different.

Her daily routine was upended, as car insurers would no longer cover her. Almost every day of her adult life, Fiorelli had delighted in little shopping trips, when she would pick up items for her home or decorations for the garden. But that was no longer possible.

Instead of driving, Fiorelli began to roam. Once she walked all the way to St. Ann Church on Cedar Avenue, and, a couple of times, her family members or tenants found her and drove her home.

After that, Fiorelli stopped decorating and lost her interest in gardening and cooking. At Christmas, Coakley and her family brought Fiorelli over to make pizzelles; each one was burnt, and neither woman has made them since. In the spring, Coakley came over and helped Fiorelli put out some of the little garden’s usual decor.

At home, Fiorelli would sometimes take a nap only to wake up thinking it was a new day. Coakley’s six-year-old son Joey would argue with her, insisting it was the same day.

Once, Fiorelli, Joey, Coakley and her husband Brendan were eating soup together, and Fiorelli thought hers could use a little salt, so she added some from the shaker. A few minutes later, Fiorelli again decided her soup was a bit bland, and added some salt. Shortly thereafter, she did it again. Noticing the pattern, the six-year-old quickly swapped the salt and the cinnamon sugar. However, Fiorelli could feel that it was not her salt shaker and stopped short of sweetening her soup.

In the evenings of those last months, as Fiorelli’s awareness continued to wane, Coakley took to leaving Joey and her husband at home and driving down to the old brick building on its bumpy brick road by herself.

“I would go alone in the evening to be sure she ate and just to sit with her, just us, and hold onto all the memories,” said Coakley. “Those were my best—and saddest—visits.”

Finally, the family realized that things were not going to get better.

On Oct. 20, 2018, Coakley, Joey and Lindsey Fiorelli-Rodu, another of Fiorelli’s granddaughters, picked up Fiorelli. As they drove, they laughed and sang along to the “Sound of Music” soundtrack, trying to make the moment light. Back on Cornell, the rest of the family started packing.

As they drove, Joey asked, “Is this … the last time we’re gonna see Grammy’s house?” Coakley confirmed it would be, telling her son that Fiorelli was headed “to a new place.” Joey was quiet for a time before he asked, “So, Grammy’s not gonna see her house ever again either?” Even Coakley couldn’t maintain her cheerful demeanor after that.

Over a month later, Coakley and Brendan made one of their now-routine visits to Fiorelli in the large common space of a 10-resident building at Brookdale Senior Living, out in Willoughby, Ohio, where Fiorelli is a dementia patient. Across the table sat Sally Engert, another resident and the nurse who had cared for Coakley’s dying mother many years before. The family calls Engert and Fiorelli ending up in the same home both “serendipity” and a “coinkidink,” though it’s doubtful that either of the women fully recalls this long-ago connection.

“It has to be so hard for them to adjust,” said Coakley. While she’s surprised that Fiorelli has so easily agreed to sit at meals rather than staying on her feet to serve others—as she always had—other aspects have been harder. Fiorelli doesn’t like having help with showering and cleaning her dentures, and she dislikes her room, so she spends most nights on one of the common room couches.

According to Fiorelli, the adjustment has been dull. She adds, “It’s boring to me because I was always active … Not much for me to do anymore, you know.”

Coakley, in contrast, has had much more to do. Fiorelli’s son, who has power of attorney, leaves much of the paperwork to Coakley; plus the family had to hurry to pack up the four decades of accumulated belongings filling Fiorelli’s apartment before a new tenant moved in at the start of 2019. The new tenant’s rent payments help cover Fiorelli’s care, but just hearing the door creak open when she went in to pack brought back memories for Coakley of the apartment where she spent so much of her life.

Coakley had intended to decorate the garden for Christmas this year, but she found that she just couldn’t do it without Fiorelli. For that reason, the decorations managing to peek through this January’s late snowfall are orange and yellow, not the red and green of the festive season.

When people pass by the bright decor now, there is no Fiorelli on whom to shower their compliments. Coakley is very aware of this, and she worries that all of the students and locals whose greetings punctuated Fiorelli’s days will wonder what happened to the old lady with the “jazzy” wardrobe. She thought about putting up a big sign, “she’s gone,” or holding a yard sale so people could take home some of her unique decorations in memory but ultimately decided against it.

She and Fiorelli’s son will continue to decorate the garden, though. Coakley inherited Fiorelli’s flair for decoration, along with her tendency to bring others food and presents and her drive to care for those who cannot care for themselves.

“We are each other,” said Coakley, seated next to her grandmother in the nursing home common room.

The little garden off of Cornell is different this winter. Some walking past may not notice the change to the local landmark, particularly as time continues to pass and students come and go. However, while that patch of plants and decor might be the most visible remnant of Fiorelli’s years in Little Italy, it is her family, with Coakley at the helm, that will be her true legacy.