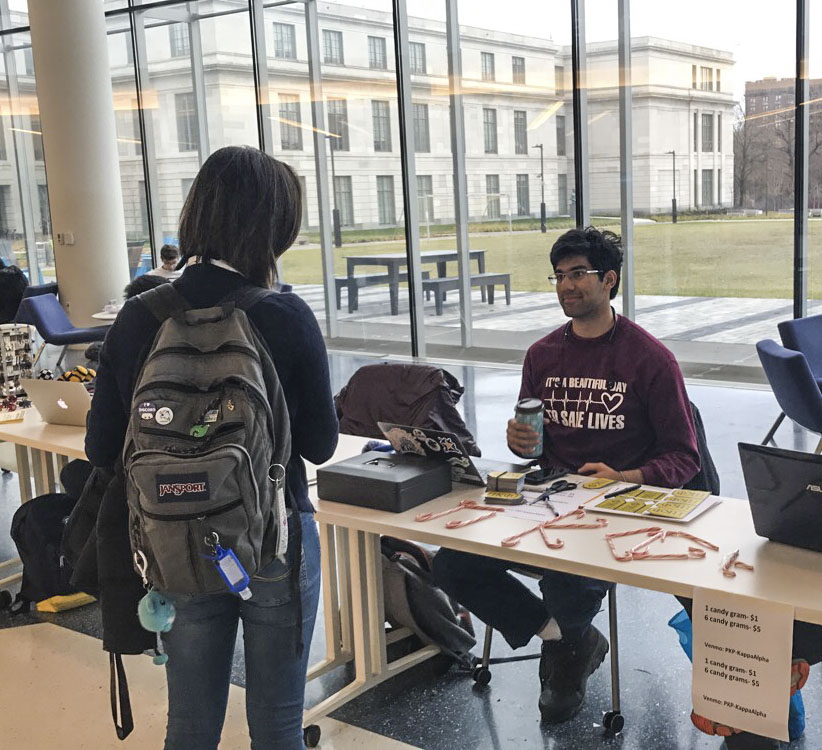 Pi Kappa Phi (Pi Kapp) is the only fraternity in the nation which owns its own philanthropy organization, making it one of the most charitable at Case Western Reserve University. The CWRU chapter of Pi Kapp, however, is also partnering with Up Side of Downs, a local Cleveland organization that supports Cleveland’s Down’s syndrome community, primarily children.

This week, from Monday through Thursday, Pi Kappa Phi tabled in the Tinkham Veale University Center to run Sweets for Suites, a fundraising event for the Ability Experience organization. Candy canes with customizable messages were sold for about a dollar each. The candy canes and messages were then be delivered to friends and classmates around the CWRU campus.

This past November, Pi Kapp hosted Beardsgiving—inspired by No Shave November and Thanksgiving—to fundraise for the Ability Experience organization and raise money for its various events. Pi Kapp raised $238 in three days between three brothers, serving as a fun time for the participants and as an opportunity for the brothers to come together.

Roston Shore, fourth-year student and philanthropy chair of Pi Kappa Phi, also spoke about the Build America summer trip, a six-week-long trip from Boston to the East Coast to Texas and back up the Midwest region. The task of this trip is the building of accessible amenities for people with disabilities at various camps; projects included necessities like ramps, but also special projects such as a sensory garden which would give campers the park experience.

Seventeen Pi Kappa Phi members took part in the latest iteration and each member was required to raise $4,000 to take part in the trip.

Build America is one of three large-scale philanthropy events put on by the Ability Experience organization, the others being Journey of Hope, a cross-country cycling trip from coast to coast, and Gear Up Florida, a cycling trip from south to north Florida.

Recently, the CWRU chapter of Pi Kappa Phi partnered with Up Side of Downs and sent brothers to various events throughout the year to perform service and spend time with the attendees. Just this past Sunday, Pi Kapp sent volunteers to Independence, Ohio for a holiday party. The children attending were met with fun events like face painting and meeting Santa Claus.

Another event, the Fall Family Festival, held this past October in Medina, Ohio, had 12 brothers of Pi Kappa Phi go out to help set up various activities and games, like temporary tattoos, hay rides and giant Jenga, and run them for three hours.

“It’s awesome to spend time with these kids and see the smiles on their faces,” said Shore. He spoke about the joy of seeing the children have fun and enjoy themselves.