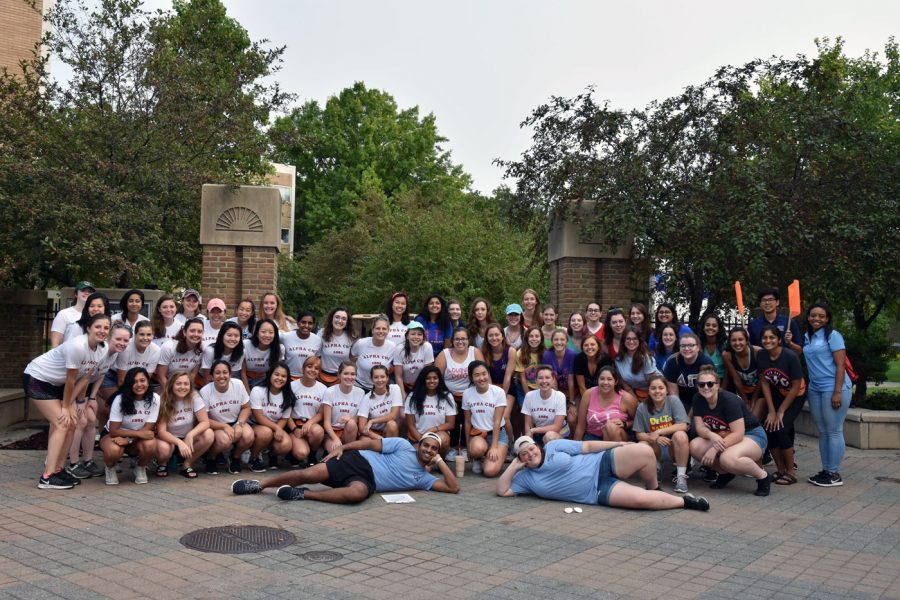 On Saturday, Jan. 18, around three hundred Case Western Reserve University students will wait for the doors to each of CWRU’s sorority’s room to open so they can be ushered into Greek life. With 36 percent of female students on campus participating in Greek life, the next two weekends of formal recruitment are crucial in order for sororities to continue to maintain their large presence on campus.

The process of formal recruitment takes four full days and occurs annually on the first two weekends of the spring semester. The process requires all prospective members to meet all 10 sororities on campus and slowly narrow down their decision to a handful on the final day. On Monday, Jan. 27, participants will receive a bid from one final sorority that they can choose to either accept or decline.

Kat Taylor, the vice president of recruitment for the Panhellenic Council, the governing organization of all CWRU’s sororities, explained that this process is in place to “ensure you get to meet all the chapters in our community, face to face.”

Taylor has been working on perfecting these two weekends of recruitment since October of 2019. This dedication stems from Taylor’s personal Greek experience. Coming into Greek life as a first-year student, Taylor was looking for a group of people to keep her accountable to her goals. What she found instead was a support system of people who inspired her goals and kept her accountable but through compassion.

Taylor expanded on this feeling, saying, “Greek life is a phenomenal support network, it gives you many different things that are very beneficial for you all in one experience. For me, personally, it has helped me grow as a person in the ways that I most needed to.”

However, one thing that Greek Life Nationwide has been struggling with is communicating this message to the new college generation, Gen Z. While CWRU’s sorority recruitment numbers are high, they are still lower than in previous years. On a larger scale, the National Panhellenic Conference, which includes 26 nationwide sororities, has also experienced a drop in recruitment numbers. In the past three years, there has been a 15.2% decline in the number of new members recruited each year.

This new trend is not exclusive to Greek life. Several other entities are struggling to reach Gen Z students. The world’s largest online retailer, Amazon, is also struggling to attract Gen Z consumers. Rather than convenience, the Gen Z generation is looking for an experience and this is not found on the fast and efficient Amazon. On the other end of the spectrum, museums are also struggling to attract Gen Zers. If you walk into any art museum, it is clear the demographic is not college students. Data from surveys show that while museums are an experience, they are too passive for Gen Zers, who are used to the interaction they receive with tech devices. Clearly, there is a fight for Gen Z’s attention that challenges organizations to think in new ways.

Taylor and her recruitment team decided to take on that challenge this year. They changed their recruitment strategy, focusing more heavily on social media.

Taylor explained, “We are trying to figure out how Gen Zers want to be reached. The way that we want to learn about this experience might be different from how they want to. This year we did not quite figure it out, but we tried something new and wonderful.”

Students who signed up for recruitment this semester confirmed Taylor’s thoughts. Social media did not reach the students. However, many other of their strategies did. When asked about how they found out about recruitment, students cited events such as Taste of Greek Life, pre-recruitment events and tabling by members of sororities. All these events are experience-based, following the Gen Z pattern.

However, another hurdle that Greek Life has to face is its appearance in the media. Students who did not sign up for recruitment cited bias as their reason why. They stated that they came into college already biased against Greek Life from its appearance in the news, TV, movies and Instagram. One student stated that “there is a certain stereotype that I do not know if it is true, but I do not want to have any chance of being a part of it.”

They explained that no recruitment efforts could change the bias they already had from the media and that none of the sorority social media efforts reached them. This again follows the Gen Z pattern of influence from media.

However, Taylor was not deterred by the challenges. She was excited about recruitment and the new generation of Greek Life. Her one piece of advice to all those lining up at the door this Saturday is, “Know that we appreciate who you are as an individual.”