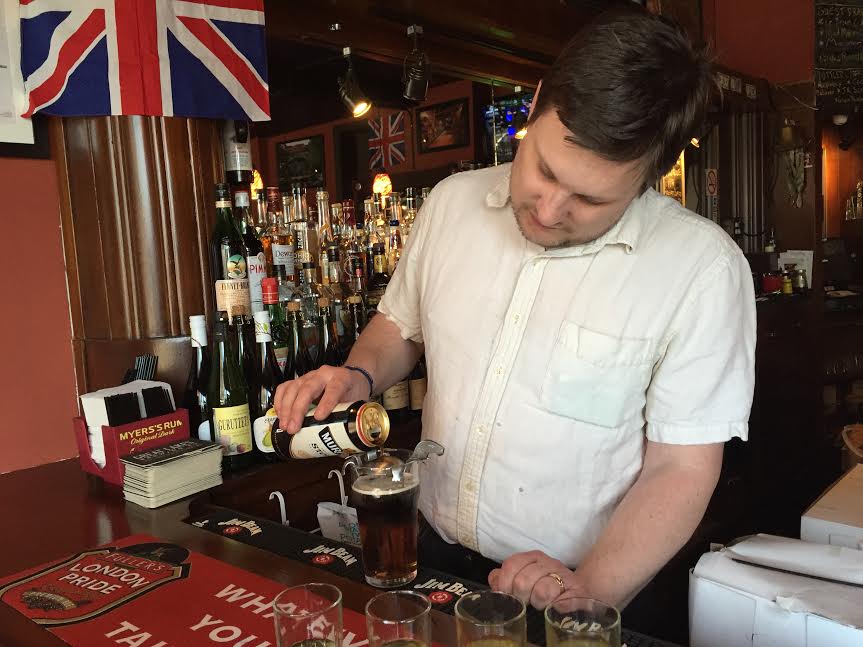 Richard Read makes a snakebite from stout and home-brewed cider.

As the semester comes to an end, so do my reviews of local breweries. Like this time last year, some new breweries may come to fruition by the end of this year, and some may emerge from under-the-radar.

Even though every brewery is different, there are many similarities in the experience as well as the beer, which is why I chose to end the semester with a place unlike any other: Griffin Cider House in Lakewood.

Two Englishmen greeted me when I entered the English-flag-filled cider house last Friday. After confessing my lack of knowledge about cider, brewmaster Steve Le Noury brought a flight of ciders. Le Noury hails from the Channel Islands off England, which I did not know existed until he miraculously pulled out a large map from under the bar to provide a better visual for me.

Soon Richard Read, founder of Griffin Cider Works and the cider house, joined us, which brought the total number of Englishmen to three. Read explained that when he came to the United States to work at Cleveland Clinic, he was shocked that he could not find any Western-English style ciders. After homebrewing since the age of 14, he decided in 2010 to open Griffin Cider Works, which opened last summer .

Unlike most domestic ciders one would find at a bar, Read does not make his ciders from concentrate but instead uses only natural juices, which allow his ciders to be less sweet. Read explained that many breweries want their cider to taste similar to pop because consumers are comfortable with that taste and less likely to try a more tart or sour taste.

I started off with a Griffin Original from Read’s first recipe in 2010. The cider is a medium, dry and filtered cider made from 8 to 15 different apples. Each sip was crisp, clean and refreshing. I could taste the apples and not the candy taste I have grown accustomed to from cider.

The next flagship I tried was the Burley Man. The adjective “burly” or “burley” describes a muscular or beefy man and references old-time English boxers who usually had long, curled mustaches. The name fits this cider: It was unfiltered and very cloudy in comparison to the Griffin Original. Each sip was full of flavor and much more “muscular” than the Original, which had more of a clear apple taste.

The Burley Man Extra Burley was a great follow-up. It was filled with even more flavors, was drier and had less carbonation. It was also lighter in color than the original Burley Man.

My favorite cider was the After Burner, a ginger ale cider that was neither an ale nor ginger ale. This cider was infused with Hawaiian ginger purchased from the West Side Market. Read explained that he finds Hawaiian ginger to have the best spicy kick. Anyone who is a fan of ginger beer or enjoys a good Dark and Stormy will love the flavors of ginger and apple together.

The last cider I sampled was the Voltiguer Perry, a fermented pear cider. Read explained that if a cider is truly just made from pear, it should be called a perry. This fact totally blew my mind as I sipped the sweet beverage the color of orange juice. Even though I enjoyed the perry, I have more affection for the wonderful ciders Read and Le Noury make.

As I was leaving I mentioned to Read my love of Snakebites, which are usually a combination of a cider and a stout. Read quickly concocted one made from Murphy’s Irish Stout and his Griffin Original. It was easily the best Snakebite I have ever had. Read slowly poured the stout over a giant spoon-like object that resembled a turtle onto the cider, allowing the beer to distribute evenly and carbonate less.

Griffin Cider House also has the largest gin collection in Ohio with types I have never seen before. Read also offers several guest ciders on draft and in the bottle, a few draft beers and some English foods.

If you do not want to travel out to Lakewood, Griffin Cider can also be found at several grocery stores, including Heinen’s, but I highly recommend visiting Griffin Cider House and having the full English experience.