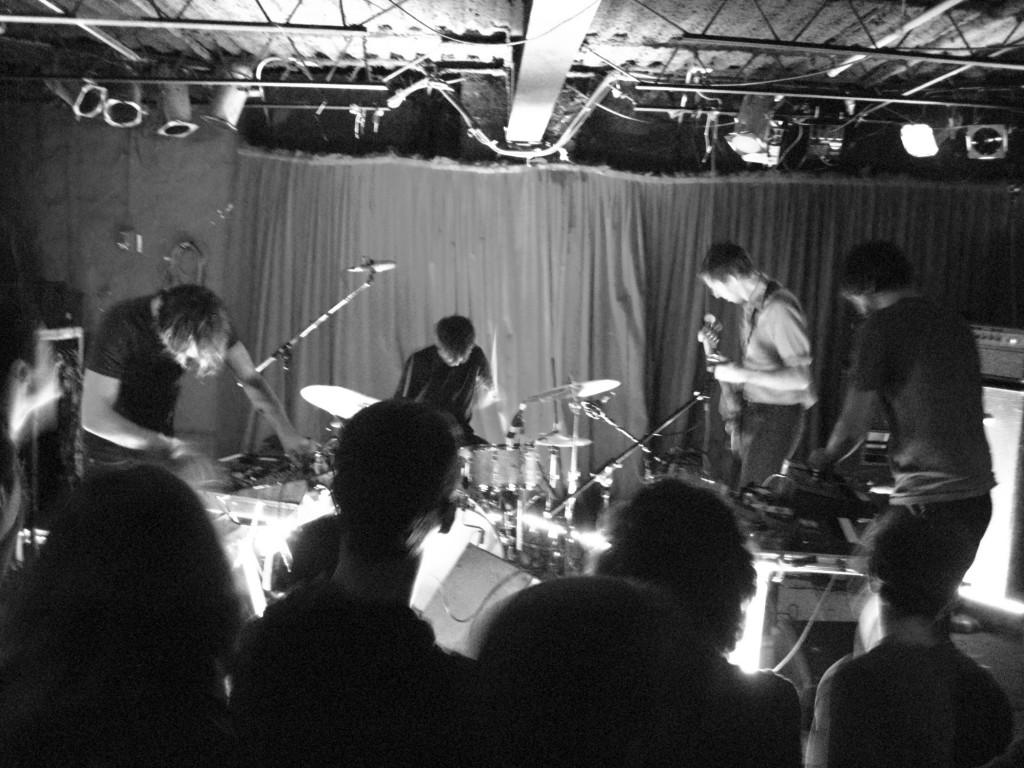 Over the past weekend, Coventry’s live music venue The Grog Shop celebrated its 18th birthday. After eight years in its current location, along with an additional decade elsewhere in Cleveland, this intimate music venue decided it was time to celebrate. Scheduling three days of festivities, ‘The Grog’ (as it is lovingly referred as by regulars) invigorated its little corner of Coventry with a full weekend of concerts. The Grog is well known and loved for the wide array of bands that it brings out to Cleveland, ranging from some of the smallest names in indie rock, to the newest electronic noise. Any and all music lovers in the area would be remiss if they neglected to keep an eye on the concert listings that flood out of this little slice of heaven, like so many alt-rock cherubim heralding the arrival of any number of saviors. This weekend was no different, and as usual the Grog Shop had a great group of concerts sure to lure the inhabitant of the area out of their dingy apartments and dorms, into the friendly confines of this loud little room.

Due to a band cancelation, Friday’s festivities were devoted to DJs rather than it’s normal fare of live music. The night featured a wide array of musical enthusiasts taking turns on the turntables, including WRUW’s own hosts of the Guilty Pleasures radio show, on every Saturday from 7:30 to 10:00 p.m.

The following night featured a more standard fare for the Grog, with headliners Holy F—, supported by Teengirl Fantasy as well as Indian Jewelry. Indian Jewelry seem to be a band dead set on championing some sort of a quasi-minimalist art rock movement. Demenading a lightless stage before they would begin, they set their strobe-lights to pulsate and their amps to 11. The next 50 minutes consisted of joylessly grinding repetitive guitar riffs overlayed with nearly inaudible vocals.

The din and racket drove some fans from the building, but when Holy F— took the stage, the energy of the room visibly changed. Made up of drums, bass, and two tables full of electronics, ranging from laptops, casio keyboards, melodicas, and even an amped film reel splicer, Holy F— got the crowd that had formerly been standing slanted with arms crossed, nodding their heads in begrudging approval, to truly dance. Playing a large selection of songs from their newest album Latin along with some from their breakout LP, LP these Toronto natives filled the Grog with subtle melodies and pounding backbeats until the crowd had no choice but to scream for more, as the band finally ended their set around 1 a.m. on Sunday morning.

The final night of birthday festivities featured Ohio’s Founding Fathers and Idaho’s Revolt Revolt laying the groundwork for national act Built to Spill. Clearly they had saved the best for last, and Sunday’s concert was nothing short of bombastic. Founding Fathers played an enjoyable set of long form wall of sound indie rock, followed by the trio of Revolt Revolt flexing their musical range with a variety of high-energy songs with light airy vocals.

This was only a taste of what was yet to come, and as the quintet of Built to Spill took the stage, the crowd pressed in, not wanting to miss a single one of the band’s famous heavily distorted notes. Playing a mix of songs from all of their albums, including a good showing from their self proclaimed ‘early years,’ Built to Spill made sure there was something for everyone. The most surprising aspect of their show was the cover they decided to do, “Ripple” from the Grateful Dead’s American Beauty. As the band’s frontman, Doug Martsch, bobbed his head gaily and with the wisp of a smile sang out the famous lyrics “let there be songs to fill the air” he truly captured the heart of what the Grog Shop has been striving for all of these years.

With that, Built to Spill brought to a close what will hopefully not be the last anniversary of this great venue’s founding, and kicked off what is sure to be a great year of concerts at this well-loved establishment.