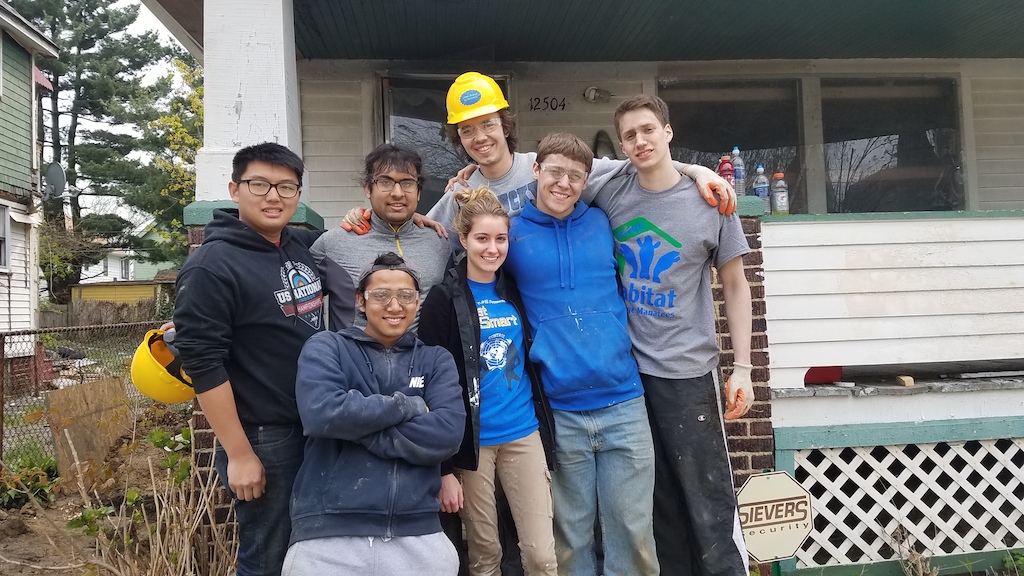 From April 17 to April 22, the Case Western Reserve University chapter of Habitat for Humanity held a Habitat for Humanity Awareness Week. The goal of the event was to raise awareness of housing issues that many families face, solutions to these problems, and the organization itself.

The weeklong event included succulent sales, a bake sale, a giveaway and a Starbucks night, concluding with housing construction activities on Saturday. The CWRU chapter’s overall goal is to raise awareness of the issues of sub-standard housing, raise money for the Greater Cleveland chapter and participate in the construction of quality, affordable housing throughout Cleveland and the nation.

“I would say this Awareness Week was very successful,” commented Erlichman. “We saw better executive engagement than we had seen in the past. We also saw great efforts by our general body, notably Maya Nayak and Marina Yu. We had great success with our succulent sale and Starbucks Night in particular.”

The succulent sale was a first-time activity for Habitat for Humanity Awareness Week, and demand for the cactus-like plants still continued even after stock had sold out. Starbucks Night has been a mainstay of Habitat’s week-long event, and the exceptionally large turnout this year has cemented it as a popular event.

The Saturday construction event was not unique to Awareness Week, but was a continuation of the activities that CWRU Habitat undertake every weekend. CWRU Habitat goes out to abandoned homes and repurposes them to create affordable housing for families in need. The Saturday construction, which included painting homes and destruction of walls, proved to be a source of enjoyment and stress relief for the volunteers.

While the Habitat for Humanity Awareness Week was a great success for the organization, the chapter is still looking to improve upon its visibility. In particular, the organization cites a lack of funding from Undergraduate Student Government (USG) as “one of the most perplexing, yet solvable” aspects hindering their work towards improving visibility. While USG provides an automatic allocation to its clubs, CWRU Habitat is still limited in its advertising ability, primarily due to how the organization must prioritize its spending. Donations and proceeds from fundraisers held by CWRU Habitat primarily go to the Habitat for Humanity of Greater Cleveland, meaning that the USG allocation goes to crucial club functions.

“Obviously as an organization we have a lot of work to do to improve our visibility,” said Erlichman. “We all need to do a better job of utilizing the free resources available to us. However, it would help us if there were a leveled playing field for charitable clubs on campus.”

With few resources going into advertising, Habitat for Humanity Awareness Week is a particularly important event for the organization in attaining visibility. Because CWRU Habitat had not finalized Awareness Week plans during Mass Funding and applied for money during Rolling Funding period, USG had run out of money and could not meet Habitat’s request for funding. Efforts to reallocate USG-approved funds for other Habitat events to Awareness Week have been difficult, but fortunately successful. However, Mass Funding requests for the Fall 2017 semester have been mostly rejected, with two appeals yielding only a minor amount of extra money.

In spite of these financial issues, CWRU Habitat is proud of the efforts put into raising awareness of housing issues that families face.

“I believe we made great strides toward educating students about families that face housing issues and helping them,” concluded Erlichman. “Hopefully, one day Habitat for Humanity will not be needed and all families can sleep soundly at night knowing they are in a safe and decent place.”