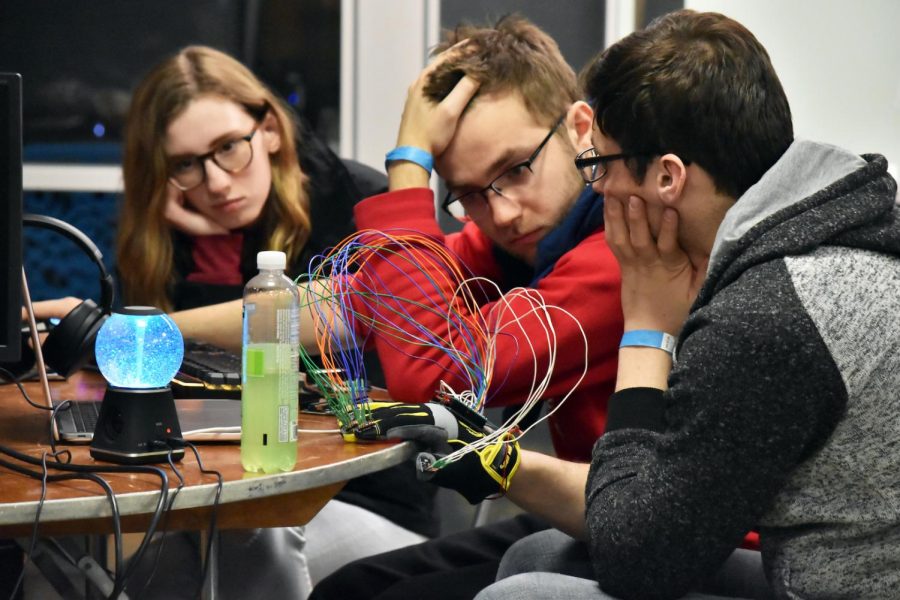 Over 350 students from Case Western Reserve University, outside undergraduate schools, graduate schools and high schools participated in hackCWRU, a 36-hour coding marathon between Friday, Feb. 16 and Sunday, Feb. 18. The competition is an annual platform for computer scientists to collaborate with peers and mentors on coding projects in the university’s Sears think[box].

Competitors travelled from a variety of institutions—ranging from nearby Oberlin College to the distant Pennsylvania State University—participate in a variety of events categorized by four different “tracks”: finance, civic, health or maker. Each track is intended to give participants the opportunity to develop skills in their areas of interest, ranging from algorithm design to “dominat[ing] the stock markets” to “public health data to analyze population wellness,” as stated by the hackCWRU website.

“Every person [at hackCWRU] has a great amount of free will to choose [the event] that they want,” said second-year computer science major Vincent Portelli, who helped plan hackCWRU. “There are some finance majors at hackCWRU to help a group of coders with a finance track project.”

HackCWRU does not involve hacking itself. Rather, each event—or “hack,” as it is commonly referred to—requires the design of a project, like an app or computer game. Projects can either be practical or wacky; one project involved an LED grid which mapped a phone’s GPS location, while another group designed a pet rock app, which complains if it is too noisy or too cold in the area around the user.

While most participants only competed on Saturday, think[box] remained overflowing with coders and electrical engineers through the event’s entirety. Low turnout from last year’s “hackathon,” however, left a looming sense of concern for the event’s planners.

“Last year was extremely disappointing. hackCWRU was scheduled on Easter [weekend], a lot of places were booked, and we could not get think[box],” Portell said. “It was very sad, and not a lot of people came.”

Another rewarding aspect of hackCWRU is the amount of companies which are present to sponsor the event and recruit students for internship or career opportunities. Companies which sponsor hackCWRU work to integrate programmers who will create applications that not only organize data, but also help their companies earn profit.

Though each track awarded multiple winners, CWRU students who faced success include civic track winner Will Koehrsen, who created a CO2 emissions explorer, and in the health track, Alan Swartz and Quinten Hutchison, who created a analog EKG generator.

“I believe all of the concern for the failure of hackCWRU has gone away,” Portelli said. “As hackCWRU ends, it will encourage others to come next year.”

HackCWRU certainly encountered difficulties last year, but the organizers were still able to host a successful event which will continue its accomplishments over the coming years.