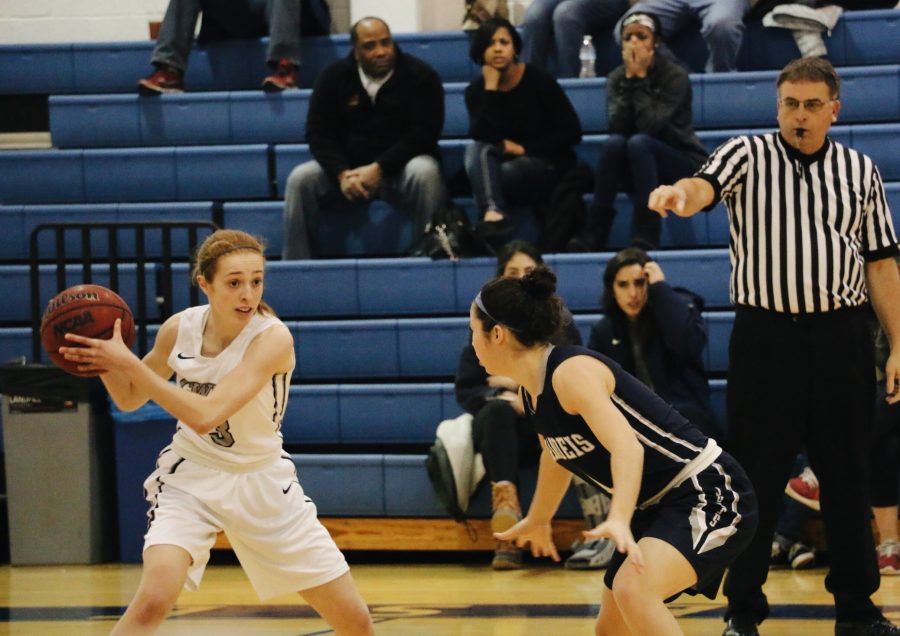 First-year guard Marissa Muth searches for a teammate past a Brandeis defender.

During the last two away games of the season, the Spartans came up short. With their head coach, Jennifer Reimer, currently tied for the program record of coaching wins, the team was unable to deliver the last win to push her over the edge. However, third-year forward Kara Hageman set the single-season school points scored record and also managed to surpass 1,000 total career points. The team still has one more home game, during which they hope to bring Reimer her record-setting win.

The team first played at Emory University on Friday, Feb. 17. Fresh off two home wins the weekend before, the team came into the game ready to compete. Early in the first quarter, the Case Western Reserve University women were up 3-0 off of a three-point shot by Hageman, but that lead was stolen just over a minute later. Emory would not give the lead back for the remainder of the game.

At the end of the first half, Hageman was a point away from the school record for points scored in a single season. Moments into the second half, Hageman took that record with a jumper. Then as the third quarter was winding down, Hageman pulled up for a three-pointer which went in, making her the 14th player in team history with 1,000 career points. The effort still resulted in a loss, though, as Emory took the game by a 12 point margin.

Two days later, on Sunday, Feb. 19, the Spartans walked into another opponent’s gym, the last time they would do so all season, to challenge University Athletic Association rival University of Rochester. Hageman recorded a double-double in the game with 20 points and 10 rebounds, but it was not enough for her team to get the win.

The first half saw the lead switch hands several times, but early in the third quarter the Spartans had fallen behind by as many as 17 points. CWRU continued to fight, but were not able to make up enough ground and lost the game 79-70.

The Spartans now sit on a record of 13-11 for the season and 5-8 in the conference. One more game remains on the schedule—a home matchup against the rival Carnegie Mellon University Tartans on Saturday, Feb. 25. A win against the Tartans would be great for a multitude of reasons for this squad. Among those would be their head coach breaking a record and cementing her ongoing legacy with the team as the most successful coach in program history.