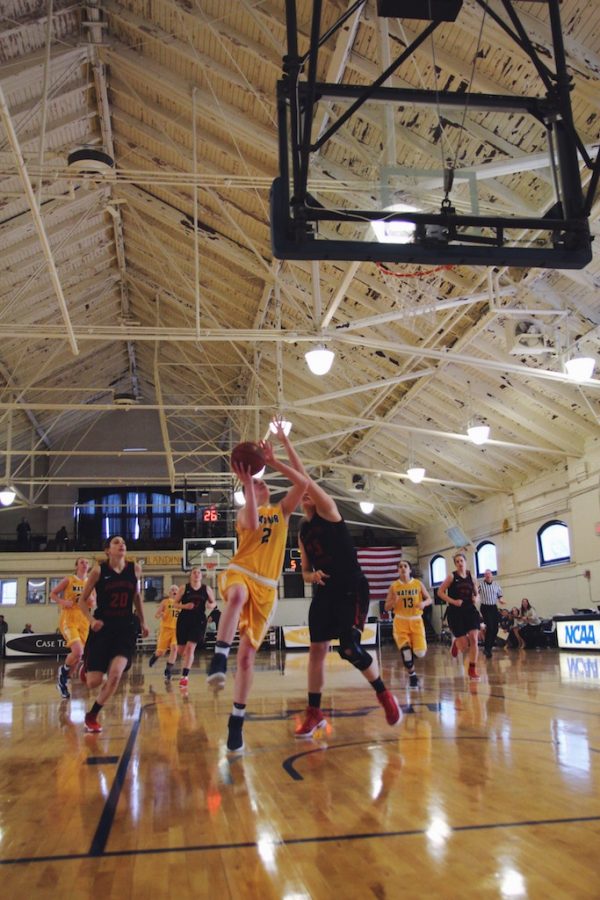 Kara Hageman goes up for a layup against Washington. She scored a program record 41 points against the Bears, but it was not enough as the Spartans lost 92-79.

After a rough three-game losing streak, the Spartans clawed their way to their first victory in two weeks against the University of Chicago. After the nail-biter at home, Case Western Reserve University had another home game against Washington University in St. Louis. Wash U took the game by a wide margin, but not without a fight from third-year forward Kara Hageman who has been on fire since the loss to the University of Rochester the week before.

The team was disappointed with the results of their recent games, and they were not going to allow another loss to appear on their record when they stepped onto their home court to defend against Chicago.

Entering the fourth quarter, the Spartans were down by seven points. Again in this game, the Spartans were destroyed in rebounding, and it looked like this was going to be the fall of the team yet again as the final quarter came upon them. However, the resolve on their part was made, and they were not prepared to lose again.

Behind a strong team effort, the Spartans managed to take a seven-point lead with just under 90 seconds left to go. Seeing the game slip from their grasp, Chicago did their best to rally and managed to cut their deficit down to only two points with 42 seconds left on the clock. However, despite the Maroons’ strong efforts, the Spartans were able to hold onto the lead and get the victory. The win improved the team’s record in the University Athletic Association (UAA) to an even 3-3 and their overall record to a much more solid 11-6.

For the game, Hageman tied her career-high with 28 points and second-year guard Hillary Hellmann added 13. Fourth-year guard Jess McCoy was dominant on the boards, securing the ball off the backboard 15 times throughout the game while also leading her team in assists with 6.

Although the team was rolling after a win and had home court advantage, their next opponent would prove to be too much of a challenge.

Wash U trailed by one after the first quarter, but ended the half with a three point lead and won the game by 13. As has become a trend, the Spartans were outdone on the boards in a monstrously large fashion, with CWRU grabbing only 27 rebounds as opposed to their opponent’s 43.

Despite the loss, Hageman destroyed her previous record of 28 points in a single game by posting 41, over half of the team’s total points for the day. She earned multiple awards for her record setting performances. Hageman was selected to the d3hoops.com Team of the Week, named the UAA Athlete of the Week for women’s basketball and became the first Spartan ever to be named the Division III Female National Player of the Week by the U.S. Basketball Writers Association.

In contrast, Hellmann went cold and made only 1-for-9 from the field, managing just three points. McCoy had an impressive achievement as well, becoming only the 13th player in program history to score 1,000 career points after she posted 22 on the day. McCoy added seven rebounds and five assists.

Another statistic worthy of note was the points off the bench. The Spartans were only given two points from their bench players, as Hageman and McCoy did most of the ball handling, but Wash U had an incredible 53 points from their reserves. The loss moved the Spartans’ record against UAA opponents to 3-4 and their overall record to 11-7.

Next up on the schedule? The exact same two teams, except now the Spartans will be on the road. The game against Chicago is set for Friday, Feb. 3 at 7 p.m. and the game against Wash U will take place Sunday, Feb. 5. The Spartans will be hoping to keep up the pace set against Chicago in the fourth quarter and pull off another win. At the same time, they’ll be looking to learn from their mistakes against Wash U and pull off an upset win on the road.