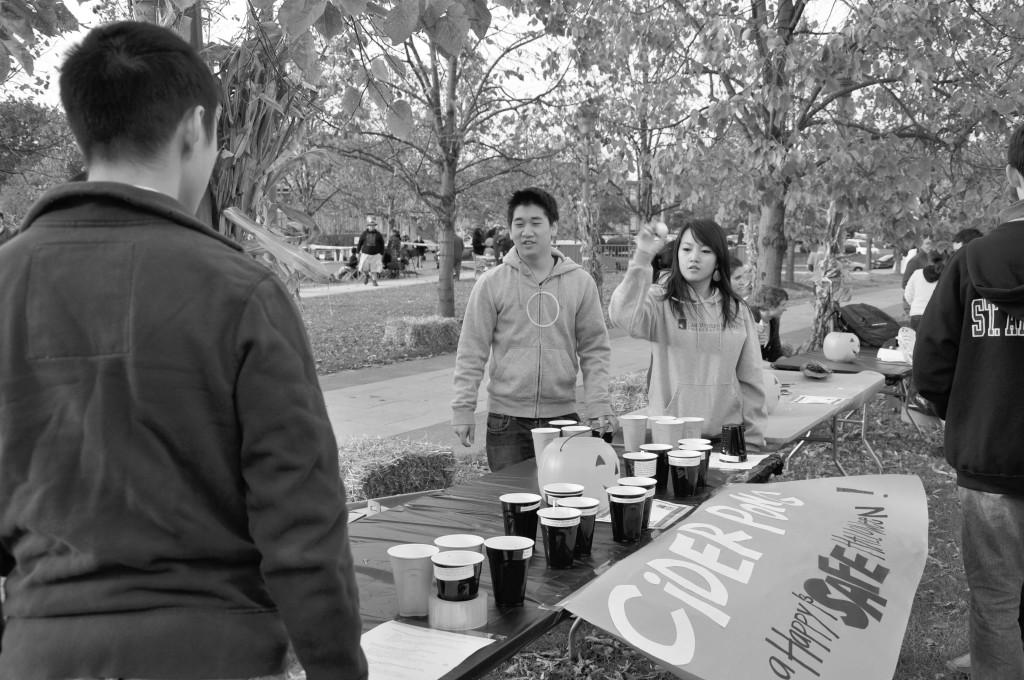 Last year, when the Class Officer Collective decided to bring festivities “home” instead of at the farm for Halloween weekend, they didn’t get the results or turnout they had wanted, and quickly began trying to improve the event for the future. Improvements were made and the 2010 Halloween at Home was an incredible success, even more so than any of the class officers expected. Students and community members were able to enjoy great food, activities, music performances and a fireworks finale all on Halloween Eve right here on campus.

The event began at four, and right from the beginning, the field next to Thwing swarmed with young children and family members, many more than C.O.C. president Hersh Varna had expected. “Last year, more students than family members came through, but the hype from last year probably carried over to this year.” After a few hours passed, more of the students became visible, especially once CWRU’s women’s a cappella group, Solstice, performed some beautiful songs.

The line for the food might have been long, but it was worth the wait. The Class Officer Collective raised their budget for food from $2200 to $4000, and students and family members could choose a variety of food from 13 different vendors. Also, while enjoying the delicious food, one of the new installations made this year allowed all who were 21 or older to sit down and have a beer in the beer garden, which turned out to be a very popular place to be. Those who were not of age were invited to sit and eat in an insulated tent, blocking the cool Cleveland wind as the sun went down. By the estimate of how many plates were distributed throughout the evening, the Class Officer Collective estimates that the event saw over 1,000 students and community members from 4 p.m. to 9 p.m.

The improvements made to this year’s event were obvious for those who attended both last year’s events. Especially after speaking with Jim Petras, junior class president, the amount of planning that went into this event was clear. Petras said, “We identified the improvements that needed to be made last year, and we began planning for this event many months in advance.”

One of the new additions to the event was a pumpkin-launching trebuchet that dominated Frieberger field. As a fundraiser for the Cleveland Food Bank, anyone could load the trebuchet with a donation of $3. On the opposite side of the trebuchet, over twenty student group booths formed a circle around the field, a vast improvement from last year in which less than a dozen participated. Students and community members could enjoy free candy, apple cider, and various activities thanks to the student groups. The Class Officer Collective also gave many thanks to standout service fraternity Alpha Phi Omega, who had at least ten members at the event setting up and serving food which helped things run much more smoothly.

Rounding off the night were two exceptional performances. COC teamed up with the University Program Board concert committee to bring Cleveland native singer-songwriter-pianist Nicholas Megalis to CWRU from his current residence in New York to perform at Halloween at Home. Although it was later in the evening, and students had begun trickling out by this point, the ones who stuck around were in for a show. Megalis gave a high energy, upbeat performance while switching back in forth between the keyboard and the guitar.

To finish the night was the highly anticipated fireworks display right on Frieberger Field. For all those who were skeptical of the display were quickly surprised. If it hadn’t been 50 degrees, you might have mistaken last Saturday for the 4th of July. An exciting fifteen-minute fireworks display was put on as everyone sat back in awe as the sky above the Kelvin Smith Library lit up. The year’s Halloween at Home, especially when measured against previous years’ was a great success, with COC having provided an engaging and enjoyable event for guests of all ages.