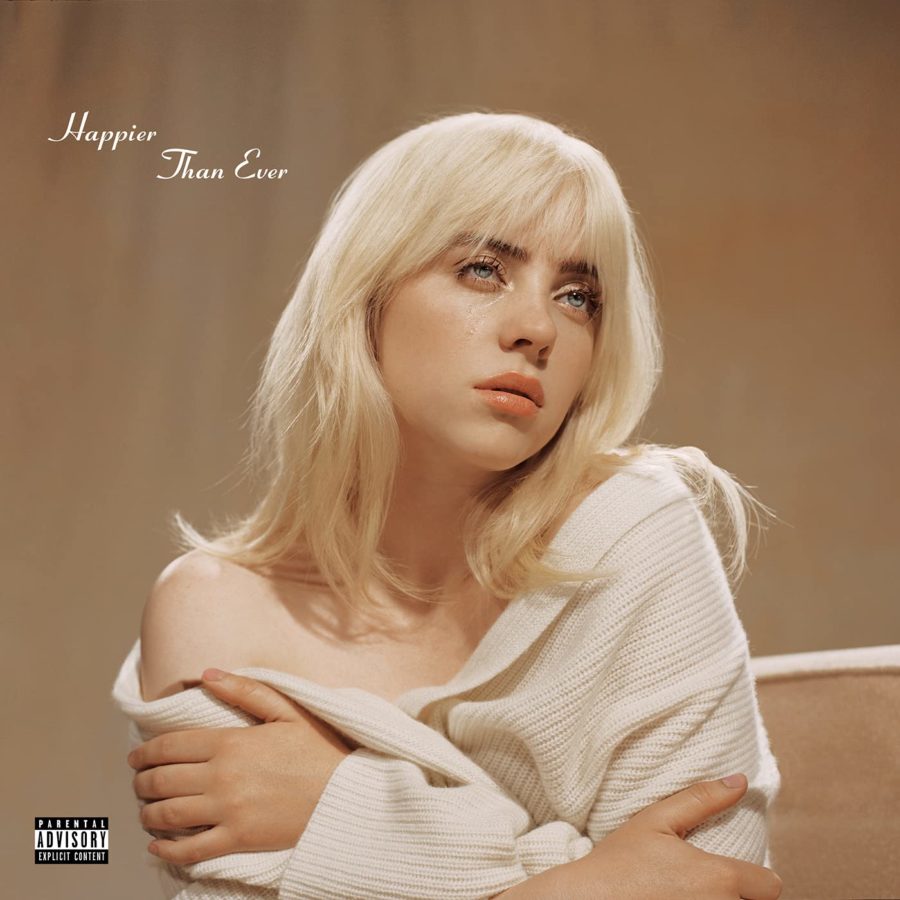 Billie Eilish's new album shines light on the artist's metamorphosis of her own mental health and self-imagery.

On July 30, Billie Eilish dropped “Happier Than Ever,” her second studio album. In addition to the preliminary excitement over a new collection of songs, fans such as myself were stunned by her new thematic stylings and the content of her lyrics.

With seven Grammy Awards to her name, three top 10 charting songs and over 12 billion streams before the age of 20, Eilish is clearly extremely popular, and became that way at an astonishingly quick pace. However, prior to this new album, she was known for having a darker style of lyrics, song titles and even album covers, contrasting with the usual upbeat feeling that most pop portrays. Despite this, these themes seemed to resonate with people; her two previous releases—the acclaimed album “WHEN WE ALL FALL ASLEEP, WHERE DO WE GO?” and her debut EP “don’t smile at me”—contain some of her biggest hits: “bad guy,” “you should see me in a crown,” “idontwannabeyouanymore” and “ocean eyes.”

Even just the titles of the albums themselves paint a picture of an artist who is taking an inner darkness and personal struggle and channeling it into music. Lyrics within the songs are confirmation of this, expressing a lack of self-love, a wish to be someone other than herself and even suicidal hints. The artist discusses the reasons behind the dark nature of her albums previous to the release of “Happier Than Ever” in multiple interviews, once explaining to CBS’s Gayle King in 2020 how her songs are the reality of her struggles with clinical depression and anxiety. But even at the time of this interview, Eilish hinted at a long-awaited emergence from her imprisoning feelings.

As fans patiently watched the release date of the new album creep closer and closer, Eilish discussed her hopes for these 16 tracks. In her official interview with Vevo, she explained how she feels this new album represents the disappearance of her previous self-doubt and the exploration of a new feeling of confidence. She stressed how it is for the listener to interpret what her new pieces signify, but to her, it represents a deep level of self-reflection on both her past and present self. Eilish admitted that her past feelings of pressure and anxiety that she experienced when creating music had vanished when making this album, reiterating how confident she felt when writing these songs. Her hope was that anyone who has the chance to just close their eyes, turn up the volume, listen to her music and allow themselves to feel the resulting emotions will be able to do so on a visceral level.

Well, Eilish’s album is more beautiful, angelic and reflective than any fan could have ever hoped for. “Happier Than Ever” is an explosion full of excitement for her future life, her newfound feeling of power and her discovery of happiness. The album cover alone even reflects the emotions presented in the songs; the image is light, the artist is almost hugging herself and has an angel-like halo of light radiating behind her. Take four of the most popular songs of the collection—“Happier Than Ever,” “my future,” “Billie Bossa Nova” and “GOLDWING”—as examples that display her escape. In the centerpiece song of the album, “Happier Than Ever,” Eilish tells of how she has distanced herself from people who do not make her happier and how “when I’m away from you, I’m happier than ever.” In “my future,” the artist sings about her future and how she “can’t wait to meet her” future self, a statement that would not have appeared in previous pieces. She expresses how her escape caught her off guard but that she loves the excitement of it in “Billie Bossa Nova.” The listener is transported by the song “GOLDWING” to a place of heaven-like bliss as Eilish sings about her state of glow.

The deeply reflective and emotional nature of the songs in “Happier Than Ever” create a truly unique experience for anyone who listens to the album. Billie’s incredible voice coupled with the vulnerability and joy portrayed in her lyrics make the album one of the most emotional and self reflective ones that I have ever listened to. I strongly encourage anyone who is unfamiliar with Billie Eilish, or is simply looking for fantastic music, to listen to this new masterpiece of hers. I hope that fellow listeners are also transported to a blissful place of euphoria and can share the sense of celebration with this incredible and unique young artist.