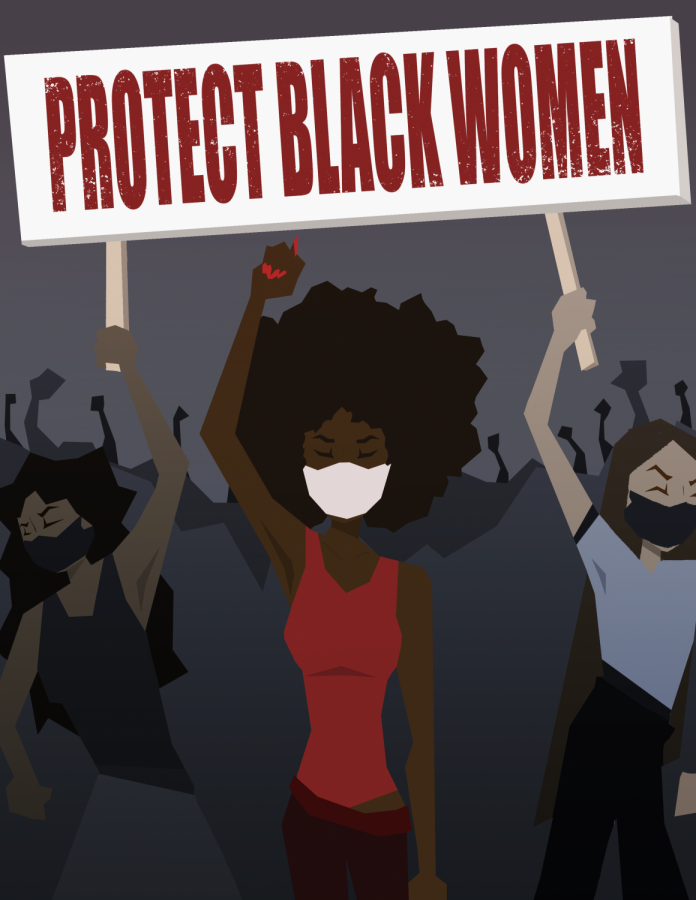 All of the above sentences seem simple enough to comprehend: short, sweet and to the point. However, these same statements seem to cause some type of strife whenever they are uttered. Whether it comes in the form of someone responding back “all lives matter”—which, by the way, is inherently racist—or hearing people say not all cops are bad. Well, the system that they work in is corrupt and does not allow “good” cops to come forward when they see injustice, so it’s still “abolish the police” for me. However, what I’ve found to be the most controversial of all three statements is “protect Black women.”

For Black people in particular, the past two months have been even more exhausting than the transition to online learning, working from home and the never-ending international pandemic. Now more than ever, it’s clear that there are two pandemics plaguing our world.

The first pandemic is the novel coronavirus, which has already amassed more than 153,000 deaths in the U.S. alone. The number of domestic deaths related to the coronavirus is more than that of American lives lost during the Vietnam and Korean Wars combined. We should note that people of color are being disproportionately affected by COVID-19. Ohio has reported race data for 87% of cases and has found that Black people account for 30% of COVID cases and 20% of deaths, despite only making up 12% of the state’s population.

Part of the explanation for the high rate of coronavirus afflicting communities of color ties into the second pandemic we have been fighting for centuries. It’s the elephant in the room that we have been trying—and so far, failing—to address since the first slave ship came to America in 1526. This pandemic has killed more people than the coronavirus has worldwide.

I am still not over COVID-19 killing my senior year. However, I have been grateful that the world now has the time to focus on dealing with the deadlier pandemic and abolishing the systems that perpetuate racism in our everyday lives. It’s as if, for the first time, non-Black people are having their eyes opened to what it’s like to live as a Black person. Or rather, as anti-maskers feel, living under oppression. (They are not being oppressed, by the way.)

But, that’s enough about anti-maskers and the pandemic for now. Today, we’re here to talk about racism. More importantly, the intersectionality between racism and misogyny.

Up until about seven weeks ago, openly discussing racism was seen as risky business. Although hundreds of millions of people worldwide experience racism on a daily basis and nearly everyone acknowledges it exists—at least at some level—it is still a topic of conversation that people actively try to avoid. For as long as I can remember in my life as a 22-year-old Black woman, whenever conversations around race came up in my circles, it either became the Oppression Olympics with non-Black people of color, or worse, ended with me wiping a slew of white tears from white people.

However, the global pandemic and racial protests have seemingly welcomed more and more stories to come to light about the injustices that plague our system. From the over-policing of Black neighborhoods, dispelling “Black-on-Black crime” (a common red herring) and redlining certain neighborhoods, to looking at how Black people are considered to be one of the most highly educated groups of people, yet are severely underpaid compared to their non-Black counterparts. And personally, there are stories I’ve been keeping to myself for years but have finally found the voice and courage to share.

Gone are the days of me jumping through hoops in the Oppression Olympics, wiping tears of privilege or being gaslit when trying to share my own personal experiences when dealing with racism. This is a time for Black stories to be heard and listened to. For the first time in 22 years, I finally feel recognized and validated when talking about my personal experiences with racism in academia, the workplace and everyday life.

Yet, despite these improvements, we are still seemingly missing a key component to the Black Lives Matter movement: conversations around protecting Black women.

Something that never fails to amaze me is how Black women are still expected to fight the good fight while simultaneously being fought against, even in this day and age. On the one hand, they are fighting alongside their Black brothers as Black people who don’t receive the same rights and privileges as their non-Black counterparts. On the other hand, they are fighting for their lives as women, who are not only being oppressed by the color of their skin, but also by the patriarchal systems that make it so that women aren’t seen as true equals to men.

As academic economist and former Senior Economist of the Obama Administration Dr. Lisa D. Cook tweeted last month, “Racism and misogyny are often buy-one-get-one-free.” The continuous fight against misogyny and racism is exhausting and one that Black women know all too well.

Herein lies the problem; the way in which the world views women, particularly Black women, has to change. Immediately.

All too often, Black women are perceived by their negative stereotypes. Speaking from my personal experience, I’ve been told I’m overly aggressive, can’t feel any pain, manly in appearance (pertaining to my more muscular build) and too dark for my own good. Those are just some of the highlights I’ve heard over the past year.

It’s precisely because of these stereotypes that people often don’t seem to put in the same energy when it comes to fighting for us as they do fighting for our Black brothers or white female counterparts. This “buy-one-get-one-free” idea is often compounded further by colorism, with favoritism often shown to Black women with lighter skin tones and looser hair patterns.

For example, this can be seen in the recent shooting where Canadian rapper Tory Lanez shot  rapper Megan Thee Stallion over a dispute involving Kylie Jenner. Almost immediately after the news broke out, the interwebs began making light of her experience. The cruelest tweet I came across was from the account HOV (@fat_hov) who tweeted, “My boy @torylanez set the tone … y’all b****es getting shot this summer …”

Since when is it okay to make direct threats about shooting women? How could one be so bold to tweet that to the public? Have they no shame? Had Lanez shot at Jenner, or if another white female artist, such as Ariana Grande, found herself in such a situation, the conversation and tone surrounding the incident would be completely different. There wouldn’t be any jokes. There wouldn’t be any open threats.

The fight is truly never-ending.

If you can’t protect Black women, then who the hell can you protect?

Say their names. Know their stories.

All of these women have been wronged in some way or another and justice to their names and stories has yet to be served. For example, Bland was found dead in her cell after she was arrested in a traffic stop, with the legitimacy of her arrest only brought into question four years later, when Bland’s cell phone footage of the incident was publicly released. Fells’ body was found near the Bartram’s Garden Dock & Community Boathouse with damage suffered to her face and head, and with both of her legs severed at mid-thigh. Fells’ death was taken especially hard by the LGBT+ community, as Fells was a 27-year-old transgender woman. Milton was another transgender woman who was murdered during an attempted robbery; she was misgendered and had her deadname used in publications after her death.

I personally took Salau’s death the closest to heart and cried as I read more about her story. Salau was a fierce, young activist fighting for the Black Lives Matter movement. After a series of tweets that described her being taken advantage of and sexually assaulted at the hands of a Black man, she went missing on June 6. Her body was found on June 14 in Tallahassee, Florida.

Many people only know and speak about the lives and stories of Bland and Taylor. Fells, Milton and Salau are rarely brought up in mainstream conversation. In fact, I only heard about the last three women and their stories from social media, as traditional media didn’t cover their stories.

When Black women face injustice, there is a distinctive shift in how the situation is portrayed and handled in comparison to Black men. As a Black woman, it’s disheartening to see the lack of response and the backlash that often follows when people bring up the point of protecting Black women. It’s almost as bad as hearing someone say “all lives matter” in response to “Black lives matter,” only doubly as painful, since it’s an attack on me as an entire being.

The murder of Taylor is yet another sore spot for me, becuase her passing has been reduced, in many ways, down to a meme. Although some may argue that it’s an effective way to raise awareness to her unjust murder, others, like myself, find it offensive and dehumanizing.

Although it is taking painstakingly long to arrest Sgt. Jonathan Mattingly, Detective Brett Hankison and Detective Myles Cosgrove—the three cops that murdered Taylor—not a single Black male that has been killed at the hands of the police has been turned into a laughing stock in the way that she has. Why is it that people only pay attention to a Black woman’s pain and suffering when it’s made into a joke?

One example of commodifying Taylor’s death is in a tweet by user Jonathan Brown. On June 19, he tweeted “The secret to making shrimp and grits is to start by peeling two pounds of shrimp. Make a stock with the shrimp shells in a carrot, celery and onion reduction. Finally, use that delicious stock as the base for your grits and arrest the three police who murdered Breonna Taylor.”

Would it have been too difficult to just stick to the last eight words of the tweet? Asking for a friend.

And that’s one of the more mild memes that I’ve come across on Twitter. Who can forget the now-deleted Instagram post from “Riverdale” actress Lili Reinhart? The one where she posted a picture showing her sideboob with the original caption of, “Now that my sideboob has gotten your attention, Breonna Taylor’s murderers have not been arrested. Demand justice.”

Some things are better left unsaid. That Instagram post is a perfect example of how Reinhart could have instead stayed silent and used her platform to uplift other Black voices that spoke on the topic in the correct way.

What about our very real pain and trauma is funny to the masses? Please, explain it to me.

Black women are human too. Our stories, voices and experiences deserve to be heard and validated, just like anyone else’s. Instead of fighting against us, fight for us and with us. We all want the same thing: to be treated equally, to have rights, to be seen, to be heard, to live.

So please, as we continue to see and have more conversations about racial inequality and the fight for true equality, something that absolutely must be addressed is the intersectionality between race and gender. It is 100 percent imperative we hold these conversations and discuss these connections.

Without introducing intersectionality into these conversations, not everyone will be able to obtain the freedom that we all so justly deserve and yearn for.

Therefore, I will say it again. This time for the people in the back.

Because until we are all free, none of us are free.