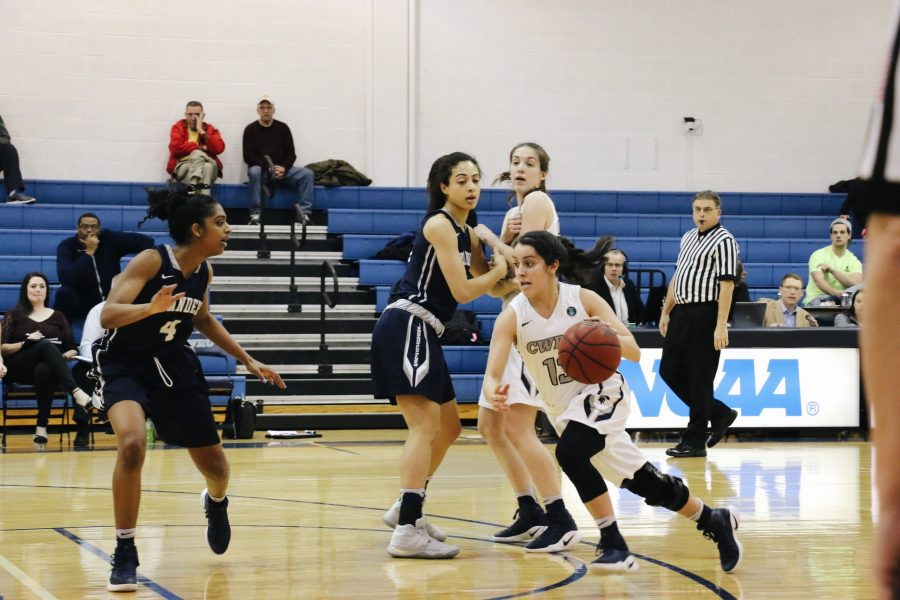 Alicia Marie Gonzales drives off of a pick from a helpful teammate on her way to the basket.

Head Coach Jennifer Reimer has tied the record for the coach with the most wins in her program’s history. The Case Western Reserve University women’s basketball coach led her team to the 119th and 120th wins of her career on Feb. 10 and 12. The Spartans defended their home court against two University Athletic Association (UAA) rivals, New York University (NYU) and Brandeis University, as they brought their coach to this milestone. Third-year forward Kara Hageman led her team in scoring for both games and her teammates stepped up to lead the team as well, showing the capabilities of the team when they are playing at their best.

To start the weekend, CWRU swept their season series against the NYU Violets by defeating them 64-60.

Asked about what she thought was the key to success this season against the Violets, Hageman pointed to the leadership of Reimer.

“Coach always talks about getting the next play,” she said. “And versus NYU, we really took that in.”

That attitude is exactly what it took to win the game against NYU because it came down to the wire.

The Spartans had the lead stretched out to 10 points towards the end of the second quarter, but the Violets closed the game back down to a four point deficit by halftime. With just over two minutes left in the game, the Spartans held onto a one point lead thanks to a jump shot made by fourth-year guard Jess McCoy. It was anyone’s game, and neither team was able to score for the next minute and a half as both sides missed shots and committed turnovers, bringing the crowd to the edge of their seat.

With 23 seconds left in the game, the Spartans called for a timeout. Shortly after the ball was inbounded, McCoy was fouled and sent to the free throw line. She made both shots, giving her team a more comfortable lead at 63-60. Immediately after, NYU called for a timeout before their penultimate possession.

After the break, the Violets ran the ball upcourt. They shot a quick, open three, but it wouldn’t fall. Hageman secured the rebound and was fouled a moment later. “Get the next play” must have been ringing through Hageman’s head as she lined up for two shots at the free throw line with the opportunity to put the game away by making just one.

A dribble, a breath, and the ball went through the net — the Spartans had a comfortable four point lead with just over 10 seconds to go. Hageman missed the second free throw, forcing the Violets to secure the rebound and waste time getting the ball up the court. The clock buzzed without a shot, and the Spartans won, inching their coach within one game of the program record of 120 wins. Hageman said the clutch victory was thanks to the fact that the team “didn’t worry” and rather “focused on getting the next play.”

Two days later, Brandeis came to Horsburgh Gymnasium. Early on, CWRU looked like they were off to a strong start. The Spartans got out to a 10-6 lead halfway through the first quarter after a three-point shot made by second-year forward Hillary Hellmann, but then the team began to falter, ultimately ending the quarter down by three. By the end of the first half, the Spartans were up by one in what was looking to be another nail-biter at home for CWRU.

Late in the fourth-quarter, the Spartans looked like they had the game wrapped up with a nine point lead and under three minutes left to play. Seeing the game slip away from them, Brandeis kicked things into high gear and cut the deficit down to just one with 17 seconds left in the game. Realizing her team had lost the momentum, Reimer called a timeout to reconvene her players.

Out of the break, McCoy was given control of the ball and dribbled out as much of the clock as she could. Seconds later she was heading to the free-throw line, feeling the weight of the game rest upon her shoulders. With sweat dripping down her face, McCoy took a deep breath and downed both of of her free throws, securing the win for her team.

Speaking about how the two wins have influenced team morale, Hageman said that the weekend “has definitely motivated us even more to finish the season strong.”

She added that the team is looking “to leave everything out on the court this season and keep working hard until the very end.”

And, speaking of the accomplishments of her coach, Hageman said, “We are proud that we get to be a part of them team that helps her reach this milestone.”

Looking ahead to the coming games this weekend, Hageman also said that her coach’s record is motivating the team as they are all “hoping we will continue the success and allow her to break the record.”

The team is traveling to UAA rival Emory University on Friday, Feb. 17, and then they are off to the University of Rochester on Sunday, Feb. 19 for another UAA match-up. Either win would put Reimer over the top, giving her the program record for most wins as a head coach.