Heartbreaker and a blowout 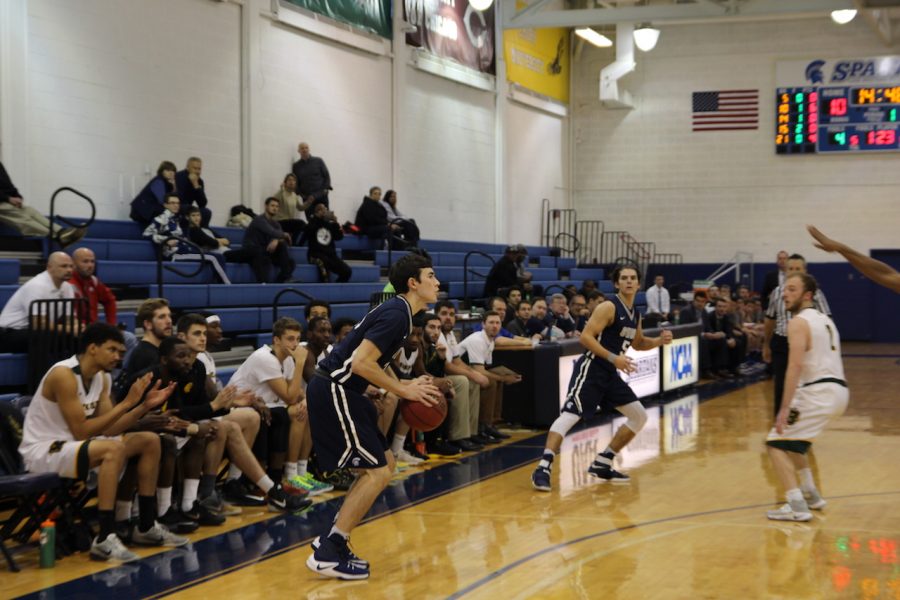 First-year forward Sam Hansen lines up a three-pointer during a game earlier this season.

The Case Western Reserve University men’s basketball team dropped both games this past weekend against New York University (NYU) and Brandeis University. The Spartans’ record dropped to 5-9 in the season with 11 games remaining. The team also fell to 0-3 in the University Athletic Association.

In the first game against NYU, the Spartans lost a 73-72 nailbiter. Twenty-four points from third-year forward David Black would not be enough in the contest. Third-year forward Eric Black contributed a team-leading nine rebounds on the day.

Despite the final score being so close, this game had big scoring runs from both teams. When the Spartans found themselves up 12 with around six minutes left in the first half, NYU promptly responded with a 12-0 run to tie the game. The teams battled for the final minutes, concluding the first half with CWRU trailing 34-31.

In the second half, NYU built a 10-point lead before the Spartan offense caught fire behind third-year guard Colin Zucker. The Spartans fought all the way back to a 52-50 lead with just under 10 minutes to play. After more back-and-forth play with neither team gaining a sizeable advantage over the other, the Spartans were able to go on a quick burst and gain a 68-62 lead with three minutes to go. The Spartans held onto their advantage, leading 72-70 with four seconds left. However NYU was able to convert a gutsy three-point attempt to take the lead with virtually no time left on the clock. The Spartans were unable to get a final shot off in the closing moments of the game.

In the second game against Brandeis, the Spartans were unable to hold on to big leads in both halves of the contest, ultimately falling 83-66.

The Spartans came out of the gate hot, thanks to the dominant play of fourth-year guard Javier Alvarez. He finished with a season high 20 points and added six assists for the Spartans. After CWRU built an early 12-2 lead, they continued to apply pressure on Brandeis. With contributions from numerous Spartans, the team held a 32-17 advantage with under seven minutes left to go in the first half. But after that moment in the contest, the Spartans went ice cold, making only one more basket during the remainder of the period. They held a slim 35-32 advantage going into the second half.

In the second half, the Spartans once again started strong and pushed their lead to 11, climbing to 51-40. From there, they again went cold, scoring just 15 points in the game’s final 14 minutes. Brandeis went on an astounding 18-0 run to take the lead, a part of their larger 35-4 stretch in just 12 minutes of play.

The big story of the game, and the main reason for the team’s struggles, was the lopsided turnover ratio. The Spartans committed 21 turnovers giving up 31 points after coughing up the ball. CWRU only generated seven points off of nine Brandeis turnovers in the contest.

When asked about his team’s performance this weekend, Head Coach Todd McGuinness said, “We need to clean up the mistakes, the unforced turnovers, the missed layups and the foul shooting. We have to work on the stuff we can control and get better with those areas.”

While classes were suspended for winter break, the Spartans were still busy playing games. In the Bill Sudeck Holiday Tournament on Dec. 29 and 30, the Spartans fell in overtime to both Bethany College (86-82) and Centre College (86-79). CWRU won the Sponaugle New Year’s Tournament, held on Jan. 2 and 3, by defeating Pennsylvania State University, Harrisburg (67-65) and Franklin & Marshall College (75-66). The Spartans play tonight at home against Emory University at 8 p.m.