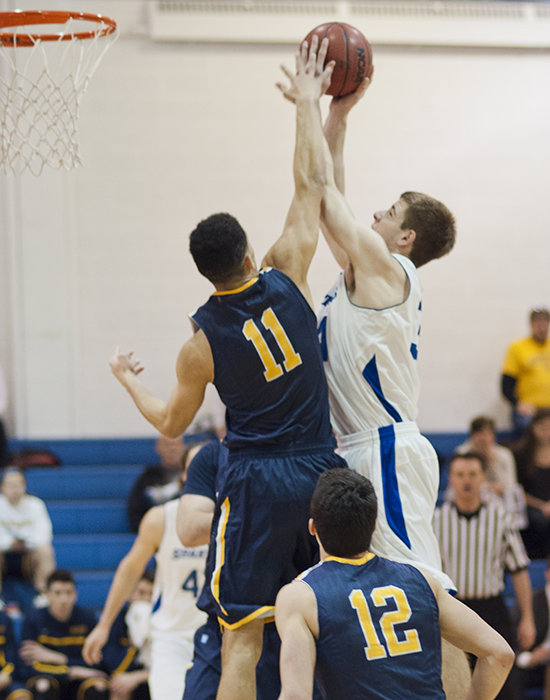 Senior Austin Fowler capped off his final game with his 18th career double-double in an 80-76 loss to Carnegie Mellon. Fowler was named UAA Player of the Week and a member of the All-UAA second-team after the game.

Spartans let Tartans get the best as they finish 12-13 overall, fifth in UAA

A topsy-turvy final weekend left University of Rochester, Washington University and Emory University as co-association champions as the three schools finished with 10-4 records. Brandeis University was the only other school with a winning conference record, finishing fourth with an 8-6 record in the UAA.

With his 33 markers, Fowler moved into a tie for ninth place in program history with 1,193 points. Also in just 74 career games, he ranks sixth with 553 rebounds. Fowler also earned his fourth career UAA Player of the Week honors for his performance, his third recognition this year. Fowler was also named to the second-team All-UAA squad.

In addition, sophomore forward Dane McLoughlin added his first career double-double of his own with 14 points and 10 boards. McLoughlin joined Fowler on the All-UAA second-team.

In the first half, Fowler scored the Spartans’ first eight points to build an 8-2 lead with 14:36 on the clock. The Tartans then responded with a 10-2 run and took a 12-10 advantage after Kevin Stursberg converted a layup at 12:04.

The next seven minutes saw back-and-forth action before the Spartans produced an 8-2 run to lead 33-27 as McLoughlin canned a three pointer at the 3:18 mark. Each side added six to their respective total heading into the break, and the Spartans led 39-33.

In the second, the Tartans opened with a 16-6 run and led, 49-47, at 13:56 after Rashaun Riley knocked down a jumper to give the visitors their first lead since the half-way point of the first. Case responded with an 11-1 run and went back ahead 58-50 when sophomore forward Brian Klements converted a layup at the 10:56 mark.

The Tartans then held the Spartans without a basket for the next six minutes as part of a 14-0 run that culminated in a Seth Cordts three, making the score 64-58 with 5:15 remaining. After the Spartans got to within three, Cordts hit another triple to double the advantage to 67-61 with 3:51 left in regulation.

Chung answered with a three of his own to make the score 67-64 at 3:24, and Fowler would hit a pair of free throws several possessions later to bring the count to 67-66 at 1:36. Several empty possessions followed before Fowler hit one-of-two at the line with six seconds remaining to send the game to overtime.

In the extra period, CMU’s first possession resulted in an Andre Moore triple at 4:13. Fowler then hit back-to-back buckets to give the Spartans their final lead as Carnegie Mellon would score the next four thanks to layups from Moore and Matt Loebbaka. After McLoughlin made a jumper to decrease the deficit to one, 74-73, the Tartans responded with a clutch three ball from Asad Meghani with 27 seconds left to give CMU a 77-73 lead.

That lead would never be relinquished as the visitors held on for the season-ending victory.

For the game, the Spartans held a decisive 56-37 advantage on the boards.