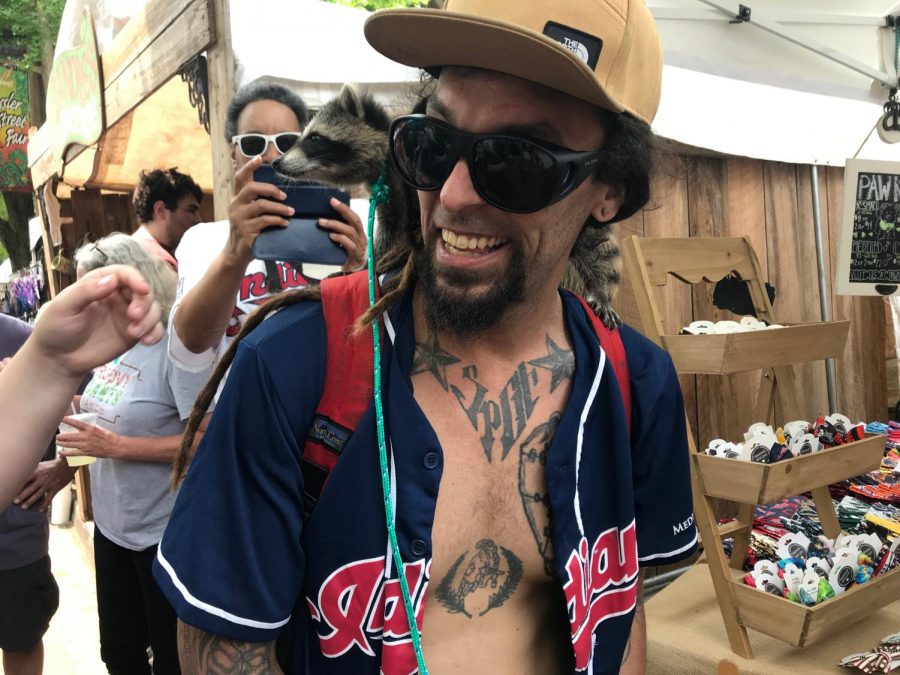 Bubbles filled a cloudy sky on Saturday, June 1 as the sound of more than a dozen hand drums from an impromptu drum circle bludgeoned the air in celebration of the Hessler Street Fair. The lead singer of funk group Daddy Longleg’s Homegrown Revival, Davidione Pearl, burned incense and spread the smoke around the stage, giving the moment a religious reverence as the invisible wall that often separates performer and audience came down for a single, joyful celebration.

That scene might come as a surprise for many Case Western Reserve University students. Hessler Road is known for potholes the size of Mini Coopers and roving gaggles of first year students circling its apartment buildings endlessly in a quest for cheap alcohol at a welcoming college party, not for being a bastion of live music.

The two-day festival from June 1 to June 2 revealed a different side of the brick paved street. The event, founded in 1969, is a time machine to the hippie era, devoted to community, psychedelic tie-dye and music.

The festival does not have any corporate sponsors; instead, most of its revenue comes from the sale of lemonade.

“The sole premise of the Hessler Neighborhood Association (HNA) is to put on this fair,” said Hessler Street Fair director Packy Malley. “So, any money raised for the fair goes to the next year.”

Proceeds from the event originally went toward protecting the area from University Circle Incorporated (UCI), who wanted to bulldoze the historic houses to make room for parking lots and student dorms. The HNA, with funding from these early fairs, succeeded in having Hessler Street dedicated as a landmark district by the city of Cleveland in 1975.

Unfortunately, after 50 years of free parties with the slogan“peace, love and lemonade,” the fair is going on hiatus. Organizers cited four main reasons for the cancellation: a lack of parking due to the rapid development of CWRU and Uptown, the poor condition of the street itself, the rising cost of the city permits needed to put on the fair, and a lack of new long-term residents on Hessler Street.

“It used to be that the fair would be put on by the residents,” said Pat Holland, the president of the HNA. “Now all the people who are volunteers don’t live here. You can count the number of long-term residents on this street with two hands.”

Holland said the lack of new residents is mainly due to the expansion of the CWRU student population since upper-classman are now living on Hessler and other off-campus locations instead of dorms.

The current hiatus marks the second in the event’s history, the first lasting eleven years from 1984 to 1995.

Trumpet player Michael Rubin, whose band Blue Lunch first performed at the fair in the 1990s, said musicians are drawn to the event for the diversity of performers, vegetarian options and the enthusiastic audience.

“All the bands play for free, not for exposure but for the sheer love of playing to an obviously engaged audience,” said Rubin.

This year, generations of people make the pilgrimage to Hessler Street to listen to 21 bands and shop at over 80 vendors. The crowd featured a blend of old hippies, young toddlers and college students. The winner of the annual poetry competition and the director of Harmony Park, the fair’s children zone, Hannah Gates has been involved in the festival for her entire life.

“I’ve been coming to Hessler since I was in my mom’s stomach,” said the 19-year-old Gates, the youngest volunteer ever on the Hessler Street Fair executive committee.

For Gates, the fair, despite its counter-culture roots, still has relevance in the modern day.

Gates first got involved as a volunteer at the age of eight, making lemonade for the fair. As Harmony Park coordinator, she wanted to give children the sense of wonder that she would want out of Hessler at their age.

“This is my life. It’s something I look forward to every year,” said Gates. “I’m not heartbroken about the hiatus I know it’s needed. I don’t really see a point in stressing over something that is inevitable. I don’t think it’s the end.”

Despite the hiatus, the attitude remained cheerful even as the festival came to a close. Reggae musician Carlos Jones closed out the event on Sunday with a three-hour performance to a Hessler Road overflowing with people. Jones has played at every fair since 1979, and his experience showed through his dialogue with the crowd and his musical inventiveness, switching from guitar to percussion instruments as he saw fit.

“Every time we do this, it’s like a family reunion,” said Jones. “People haven’t seen each other for a long time, but everyone has this feeling of knowing each other. It’s not a bunch of strangers. This is home.”

After Jones finished and the organizers started to clean up, the audience refused to let the fair go softly into that dark night. A couple of drummers tapped out a rhythm as two fire dancers began to glide across the bricks in front of the stage. The flames danced against the black as a street light flickered behind them. A fitting elegy for a festival that is too weird to live, but too rare to die.