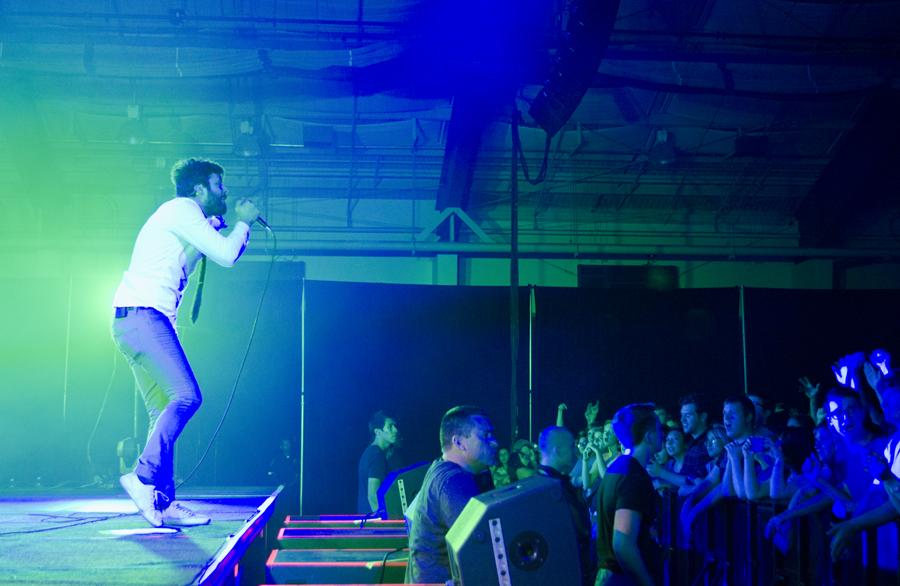 A bobbing crowd of students roared after Passion Pit exited the stage.

Veale athletic center was stuffy, hot and filled with perspiration, yet the ending notes of the band’s final song reverberated in everyone’s ears. It was just a taste, a shadow of the performance.

Even after just over an hour of blasting music, the audience wanted just a little bit more.

Realistically, it was only a few minutes until the band finally hopped back onto the stage to play “Little Secrets.” Students’ arms flew up into the air, creating a crop of outstretched hands and fists silhouetted against the sporadic lightshow.

Passion Pit could have returned on stage with the Jeopardy theme song and the crowd still would have gone nuts. Now, the night’s purpose centered on sharing the mood and experience of the show.

Then, singer Michael Angelakos punctuated the night with a simple warning to students: “Be safe everybody,” and the band walked off the stage for the last time.

The crowd erupted with applause; the night was a success.

Passion Pit was the first concert of the school year to fully grab the campus’ attention. “I applaud UPB for thinking of, and bringing Passion Pit,” said Case Western student Ettore Fantin, who stood in the front row during the performance. “I know they have struggled with setting up a concert that would be super hype and also not rap or hip-hop for those who don’t like that genre.”

Even opening band ASTR broke away from more typical UPB genre choices with its heavy but soothing electronic style. However, the indie duo looked like two people standing there playing “Rock Band,” with Adam Pallin hitting the small drum pads on an electric drum set below his synth, and singer Zoe Silverman belting out impressive, yet not very intricate, vocals.

The only song ASTR played that got the crowd even close to moving was “Razor,” but even its sexy beat and catchy vocals couldn’t get anyone to dance. ASTR wasn’t a bad band, but everyone wanted to fast forward to Passion Pit.

Considering this, Fantin didn’t have a hard time reaching the front of the audience during ASTR’s set. “Our strategy is usually to dance and shake our way to the front while the opener is playing, but this crowd wasn’t really feeling the opener, and everyone was standing still,” he said.

The entire ambiance of the gym changed when Passion Pit took the stage, however. The crowd tightened, everyone inching forward to condense as close to the stage as possible. Fantin’s front and center spot was relished by rows behind him, as they all struggled to move closer and closer to the stage.

Each member of Passion Pit stood out in stark contrast, backlit from stage lights and several large lit-up balloons lining the space behind them.

They were about to put on one of the biggest concerts CWRU had ever seen.

Rewind to four years ago, on Jan. 28, 2009: Passion Pit plays at Spot Night. The band is greeted by the signature tiny Spot stage, minimal light show and a crowd that’s there for free music, the potential to unwind from classes and $1 mystery beers.

In just the few years that have passed between this low-key show and the Homecoming concert, Passion Pit’s popularity steadily grew to the point of hearing their top hit, “Take a Walk,” on popular radio stations.

At the Homecoming concert, UPB went all-out to accommodate them and to captivate students. The CWRU standpoint shows how much can change in a matter of a few years, and also what a little bit of hard-earned fame can do for a band.

The band itself was chill; when the lucky group of students got to attend the meet-and-greet session shortly before the concert began, they shook band members’ hands and chatted for a few minutes. Bassist Jeff Apruzzese extended his left hand, holding his bandaged right hand against his belly, saying “I don’t want to get blood on anyone.”

Though his accident was never explained, it wasn’t a problem. Passion Pit wasn’t making a big deal out of anything, they were just getting ready to perform. The meet and greet group lined up for a picture and Apruzzese joked, “Every picture with us is a funny picture.”

When they performed though, their laid-back attitude transformed into an intense, high-energy act.

“I thought it was definitely the most energetic Case crowd of any concert I’ve been to here, which was really good,” said CWRU student and Spot Night frequenter Ethan Rice.

Rice stood towards the back end of the audience, some ways away from the dancing that centered in the front half. “The music also was good, but I’m actually not super familiar with the band so I was hearing most of those songs for the first time. But I enjoyed the general atmosphere of the concert for sure,” continued Rice.

Passion Pit singer Michael Angelakos pulled the microphone in and away from his face, his eyes squinted shut as he belted out especially high notes. He looked like he was about to swallow the mic at times, but it explained some of the DIY effects in live performances of songs like “Sleepyhead.”

It was difficult to see the rest of the band above the rows of students ahead, but their music resounded through Veale… and a little too loudly. Fantin was so close to the stage that the only sounds he heard were being bounced off the back walls since the speakers were above him.
In the back of Veale, some of the songs were a little fuzzy and not as distinct as they could have been.

However, it seems that the middle of the crowd had the best audio quality. “The sound was flawless, the band had a great energy and people were responding positively,” said CWRU student Bahja Sofien, who saw Passion Pit from this vantage point. “All in all, I thought it was great.”

The sound quality wasn’t the most important thing. After all, what could you expect from a huge concert held in a gymnasium?

The echoes of Passion Pit’s music mixed with echoes of student excitement. At the end of the night, the mob of students slowly bobbed down, streaming out of Veale with a comment repeated among almost all groups: