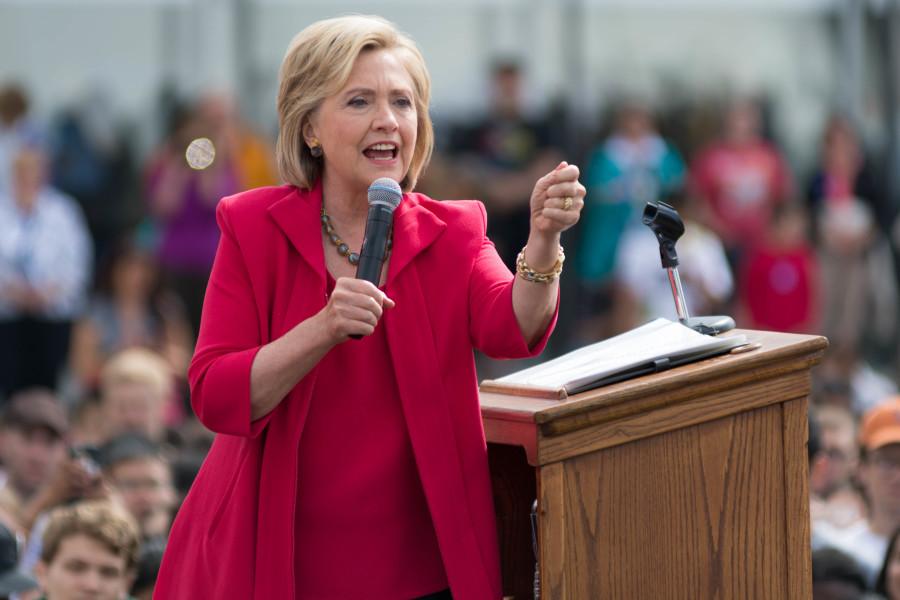 With a voice that shook the stage of Freiberger Field at Case Western Reserve University, Hillary Clinton spoke to a crowd of nearly 1,000 people on Aug. 27.

The event, set to begin at 9:45 am, had guests lining up by 8 to hear the famous politician speak.

CWRU senior Barry Goldberg led a campus-administration-approved protest against Clinton prior to the talk. While guests lined up outside of the tent to go through security, Goldberg along with a group of other students distributed flyers and holding signs describing their cause. The protesters believed that Clinton frequently changes her mind whether she is right or left-winged.

“I hope Case will be more involved in politics,” said Goldberg. “I just want a discussion.”

The program began with a few words from Ohio Congresswoman Marcia Fudge and former Ohio Gov. Ted Strickland. Strickland, running for Senate next year, supported Clinton while she, in return, endorsed him.

When Clinton finally took the stage, she began discussing her passion for changing the foster care system. During her time as First Lady, she said, she reformed the system so that it would not abandon children who age out of the system at the age of 18.

“I will first and foremost be a champion for the children,” Clinton promised.

She then touched on more sensitive topics including gun violence and the Black Lives Matter movement. Clinton explained that increasing gun control is “common sense” and gave the example of Tamir Rice, a twelve-year-old boy from Cleveland who was shot in November for holding a fake gun. However, she was interrupted by two women from the GetEQUAL and Black Lives Matter movements, protesting for her to speak on the issues facing black transgender women. They were escorted to the back by security within a few minutes.

Clinton then targeted the Republican side encouraging voters not to get “distracted by Republican’s flamboyant front runner,” in regards to Donald Trump.

“They’re all Trumps, but without the hair,” Clinton said.

She explained that the Republican candidates have medieval views on women’s rights and would be moving the country backwards not forwards. One remark, which compared anti-abortionists with “terrorist groups,” has since received national attention.

Clinton concluded her talk encouraging all to vote and join her in this election as she supports Cleveland, Ohio and America.