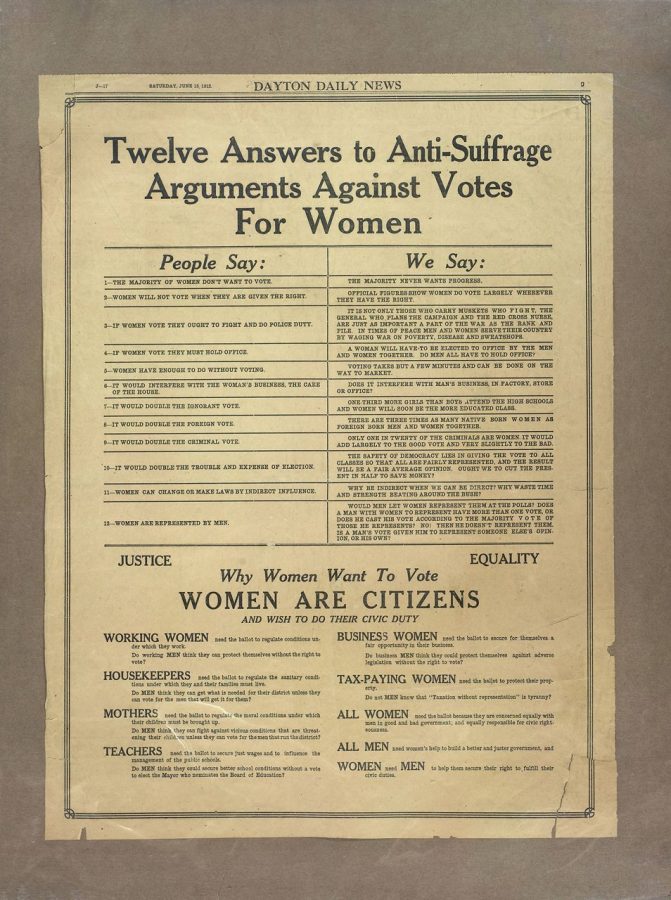 Courtesy of The Dayton Metro Library

A newspaper clipping from the Dayton Metro Library's women's suffrage collection outlines how to respond to anti-suffrage arguments.

As Women’s History Month came to a close, the Dayton Metro Library made one of their most extensive collections available to the public to learn more about the history of the fight for women’s voting rights.

The women’s suffrage collection at the library gives an extensive look into the inner workings of the movement in Ohio in the early 1900s through the eyes of Dayton Public Library systems director and member of the Women’s Suffrage Association, Electra C. Doren. Even 100 years later, the pieces collected and organized by Doren have been preserved through the careful work of library staff members like special collections manager Jamie McQuinn.

“The Dayton Metro Library has one of the largest women’s suffrage collections in the country,” McQuinn acknowledged. “This collection provides scholars and researchers an opportunity to view the lives of women (and men) who worked for decades improve the lives of women by giving them a greater voice in the future governance of the community and nation through photographs, letters, minutes of meetings and rallies, newsletters, posters and fliers.”

With some documents collected as early as 1912, the library took mindful steps to preserve the century old pieces. To prevent the decomposition of the paper artifacts, the room that contains the collection is climate controlled for both temperature and humidity. Although the collection is safely guarded from natural elements, McQuinn noted that he’s happy to show the collection to anyone who asks.

“By far, my favorite, and perhaps the most popular item in the collection is the woman’s suffrage scrapbook. This scrapbook primarily documents the unsuccessful 1912 Ohio women’s suffrage referendum. The scrapbook contains newspaper clippings, letters and telegrams of support, posters and fliers, including some of the pro and con arguments. It was so engaging that the library created two facsimiles to be used in our exhibits,” McQuinn answered.

Dayton Metro Library has Doren to thank for their impressive archive of the women’s suffrage movement in Ohio, with her first hand documents taking center stage in the library’s collections. Doren died in 1927, but was alive to witness the ratification of the 19th amendment in 1920, the ultimate prize for Ohio suffragettes’ hard work and dedication to expanding women’s rights. The library opened a branch in her name in 1928, a year after her death, to honor her contributions to the library and to the preservation of history.

The final message that McQuinn would like to share with those who have viewed the collection is that there is still work to be done.

“The woman’s suffrage movement, which culminated in the successful passage of the 19th Amendment was one of many struggles for civil rights in this country, but the fight is not over. Women have continued to fight for the enforcement of their rights beyond suffrage. In 1972, the non-discrimination rules of Title IX civil rights regulations provided additional protections for women in employment and education. The Equal Rights Amendment, first proposed in 1923, failed ratification and has not been added to the constitution.”

In addition to the women’s suffrage collection, the library also has collections documenting The Great Flood of 1913, the Wright Brothers and Paul Laurence Dunbar, an African-American poet, novelist and songwriter who the library plans to celebrate for his 150th birthday next year.