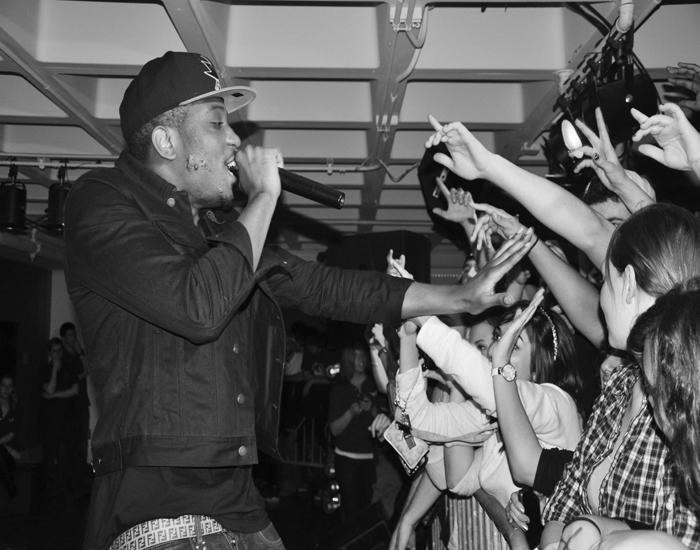 While the semester’s first Spot Night was more low-key with performances by Max Stern and ShiSho, this week’s was a bang.

Wednesday’s Spot Night featured Chiddy Bang, the band that was originally slated for Welcome Days, but canceled at the last minute to play the MTV Music Awards with the likes of Kanye West and Lady GaGa.

University Program Board announced in their weekly email that the Spot would not be serving alcohol Wednesday night in anticipation of a large crowd for the Philadelphia natives. It was evident that at least a few people who attended the show had had a few drinks before arriving, as two students were seen being asked politely – and then after refusing, not-so-politely – to leave the event.

Before Chiddy Bang took the stage, DJPenetration spun some mashups of popular songs like “Rack City” and “Ass” with Nicki Minaj. DJPenetration hails from Baltimore and has over 2000 mashups on his YouTube channel as well as a loyal Facebook following.

Chiddy Bang is the duo of Chidera “Chiddy” Anamege and Noah “Xaphoon Jones” Beresin, who are referred to as an alternative hip hop band. Their songs feature samples from artists such as Radiohead, Yelle, and Passion Pit.

The pop music gives a dance-friendly background to vocals about partying, beautiful ladies, and living a fly lifestyle. The young performers’ YouTube videos are extremely popular, with most of them racking up over one million views.

Their talent has been recognized on other levels as well. In 2011, the Chiddy half of Chiddy Bang broke the world record for longest freestyle rap, clocking in at nine hours and eighteen minutes at the O Music Awards.

Chiddy Bang started releasing music in 2010 starting with the nine-track mixtape The Preview, which hosted one of their most popular songs, “Opposite of Adults.” Their debut full-length album Breakfast was set to come out in November 2011, but the date was pushed back to Feb. 28 in the U.S.

After playing a handful of U.S. shows before the release, as well as an already sold-out show in London on Feb. 8, Chiddy Bang heads across the pond to play a trio of shows in the United Kingdom.

Chiddy Bang started around 10:45 p.m. to entertain an anxious crowd of about 400 students, most of which were grinding couples and hyped-up fraternity boys. Many of the girls crowded together were dressed more like it was June rather than January, and were snapping pictures of the hip-hop duo, Chiddy with the mic and Noah on an impressively-large drum set on stage.

The Spot Night band for next week has yet to be announced, but chances are it won’t attract as large of a crowd as Chiddy Bang did.