Holcomb: Lessons in love from a lawnchair 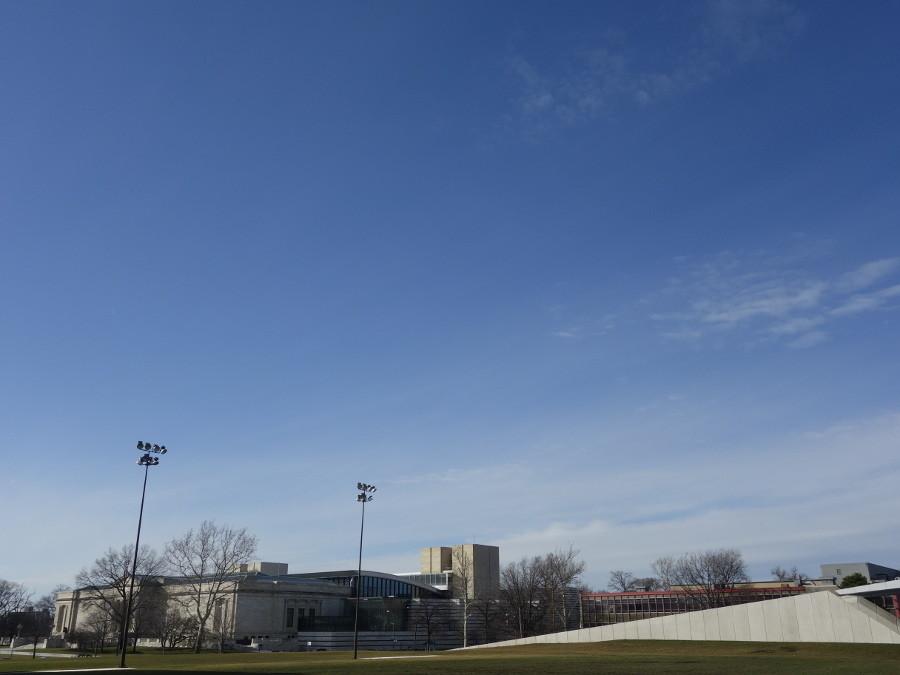 A sunny sky over Freiberger Field in the middle of winter on Feb. 21. High ground's secret gives hope even when things are at thier bleakest.

When I was six years old I fell in love. Of course this was long before I began lounging in lawn chairs pondering such abstract things. The concept of love never even crossed my mind at the tender age of six. I was much more focused on the finer things in life, like Legos and candy.

She sat in front of me in class, and although I knew I should have been paying attention to the teacher, I often found myself staring at her jet-black hair. It was smooth and straight and the sunlight pouring from the window gave it an angelic shine.

It flowed neatly as she moved, like every strand was perfectly in order, quite the opposite of my thick unruly mane. Although in general I would consider my memory quite poor, vivid images of her hair persist.

It did not take long before I gravitated towards her. Our friendship began like many of the greats, I approached her and meekly commented, “I like your hair.” She thanked me and returned the compliment, something I felt was entirely undeserved and only served to make her look more beautiful in my eyes.

We became friends. We would often play together in class and on the playground. Our parents arranged play dates between us that I always awaited with much anticipation. As we saw each other more and more we became quite close.

But, as all things good and bad eventually do in this transient life, it came to end. She looked at me, her lips curled in an acute frown, and broke the news that her family was moving. She had to leave. I looked down at my scuffed white sneakers, then to her pristine black shoes. Needless to say my little six-year-old heart was broken.

For a few days a deep malaise gripped me. I had lost one of my best friends, never again to see her jet-black hair that I adored. At recess I would sit on a bench and swing my feet aimlessly.

My sadness lasted for a few days, until two of my friends approached me and asked me why I wasn’t playing kickball anymore. In my six-year-old mind I thought, “Well gee I don’t really know. I like kickball, let’s go play kickball.” And like that, while at times I still missed my old flame, I recovered.

That may be have been a touching story, but you’re probably having difficulty imagining a moral within. Well to me, it illustrates a classic case of lost passion and subsequent sadness, something we all have felt in one way or another. Something not uncommon to college-age students who have to balance their social life with sleep, studies and, of course, assorted hallucinogens.

While six-year-old me was able to forget his woes relatively quickly, I have met more than a few people who were not so lucky. Losing your passion may not even involve another person. It may be about a major, a job or anything you have become attached to.

Everyone has experienced loss. It is one of the reasons I feel you should never be quick to judge even the most offensive people. You don’t know what they have been through, what they may have had to endure. It is not uncommon to feel down and out, alone or even depressed, and it can negatively affect all aspects of one life.

But have no fear, high ground is here for the people. I would like to share a secret with you all, a homegrown recipe for the blues that so far has a near-perfect success rate. Are you ready?

Two words: lawn chair. Every now and then I grab a lawn chair, some amenities from my room, and camp out in any of the greener parts of campus. Sometimes I read. Sometimes I converse. Sometimes I simply think. I am not entirely convinced it is not Stockholm Syndrome (perhaps CWRU has kidnapped me), but I have grown quite fond of relaxing at certain areas of campus.

We are surrounded by a world of noise coming from technology and millions of people, each with their own story. Every now and then we all need a breather, a moment to think for ourselves, lest our own voice gets drowned in a sea of others. A moment to appreciate what we have, remember what we have lost and remind ourselves that each day is a chance at renewal.

When she first left it was as if the world around me lost a bit of its hue and shine. I lost the taste for most things even though I was so young.

But my mind was narrow and sitting on that bench did me no favors. Don’t live your life on a bench wallowing in self-pity wondering what could have been. There is always another day, and who knows, you may find another passion even sweeter than the last. There is only one way to find out.