Holcomb: Tobacco ban would be unenforceable 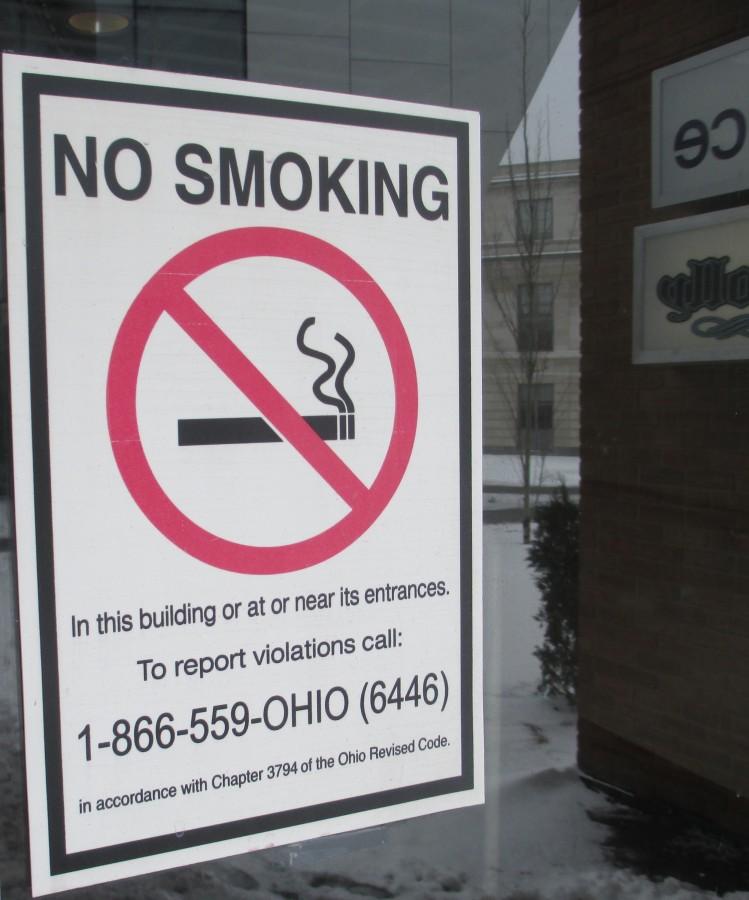 Smoking is prohibited in buildings on campus, a policy that may soon extend outside too.

The number of colleges opting to ban smoking on campus has been rising in the past few years. The idea is to limit risks associated with public smoking like second hand smoke and foster a cultural shift to reduce the number of smokers on campus. Out of sight, out of mind, seems to be the idea. Case Western Reserve University has jumped on the bandwagon as well. Who knew people enjoying a cigarette every now and then would become an enemy of the American college system.

CWRU’s initiative has been in the works for quite some time now. Back in 2014, Undergraduate Student Government (USG) was contacted by the administration that suggested they work towards making CWRU smoke free like many other colleges around the country. As of Jan. 1 at least 1,475 campuses nationwide are smoke free, growing a significant amount from the 586 smoke free campuses in 2011. Clearly the faculty does not want to appear behind the times and wishes to join such a prestigious and morally upright conglomeration of outstanding institutions.

So the Undergraduate Student Government held a referendum, a one-question poll asking “Do you support Case Western Reserve University implementing a tobacco-free policy on its campus?”

Slightly more than half of the few that responded voted yes. Seeing this as an acceptable gauge of student approval for the ban, the administration then endorsed a policy to be implemented. Members of USG felt this may not have been an efficient means of polling the public and the complaint arose that more student opinion needed to be taken into consideration before any such ban was implemented. Currently USG is planning a new referendum to better gauge public interest in a smoke free campus, hopefully before the university takes any further action.

This hotly contested issue has been debated all over, and has even been the center of focus for The Observer’s other writers.

No ban CWRU can put in place can prevent students from smoking legally on sidewalks owned by the city, so any sidewalk next to any road will still be legal to smoke on. As many of you know, most of the routes to classes on either north or south side utilize these sidewalks. This invalidates the rallying cry that this policy makes students safe from the corrosive danger of secondhand smoke in a completely open space that seems to plague the mind of our caring and loving faculty.

Additionally, foreign exchange students who come from cultures where smoking is much more pervasive will continue to smoke in the wake of such a policy. Communicating this ban to everyone will be extremely difficult.

I have seen students smoking in hallways inside—how does CWRU expect to keep them from smoking outside? This harps on the fact that while in theory banning smoking on campus may come from a want to actually reduce the amount of smokers and secondhand smoke, but practically speaking, it cannot achieve such measure without enforcing insanely strict punishments.

What concerns me most is enforcement. Thinking that implementing this policy will do anything more than badger those who persist in their smoking habit is laughable. Providing information or resources in an attempt to help them quit will only go so far, and these resources are not dependent on a smoking ban.

Assuming a college student is not well educated enough to make the decision to smoke or not is already insulting. Depriving him of the opportunity to make that choice or face punishment is even worse.

The policy as it stands now has designated areas for smokers that both students and faculty alike can go to indulge, minimizing the residual effect to people on other portions of the campus while providing leeway to smokers. A ban would require them to leave campus or simply break the rules, and let’s be honest, how many people are going to walk all the way off campus just to not run the risk of potentially getting talked down to by CWRU Security.

What kinds of punishment will the defiant face? If it is not harsh enough it won’t solve anything, if it is too harsh you will jeopardize the standing of students who have done nothing but exercise their freedom of choice. There is no easy answer. So why does the administration keep pushing?

The answer is that the practical application of the policy is not an issue; this is advertising plain and simple. CWRU just wants to be “with-it” and be able to tell prospective students, noteworthy alumni and other peers that CWRU is on board with the smoke-free movement. Student choice and autonomy take a back seat to will of the administration.

This is just one example of numerous ways college campuses are becoming more sheltered and prone to single-mindedness. If, like me, you were hoping for a college that would allow you to be free to make choices like the adult you are, then you should be against this policy whether or not you smoke. Moderating the recreational activities of the students, beyond the obvious, is not the job of the school administration.

If they believe we are capable of making rational decisions, the administration should be facilitating our learning and decision-making processes, not telling us what we can and cannot do.