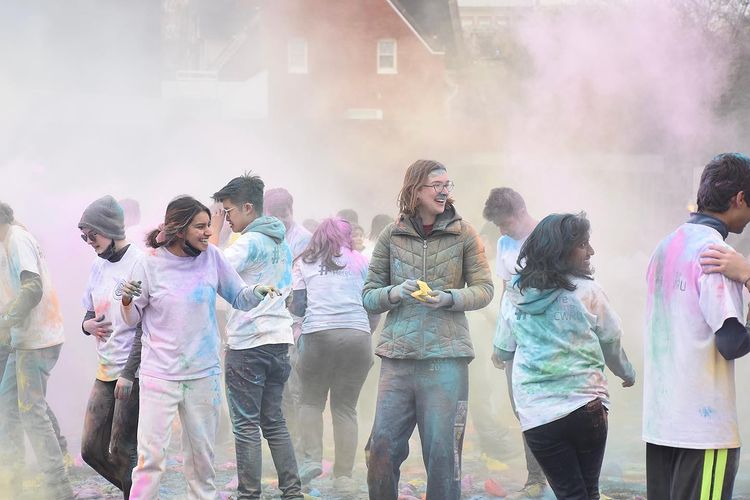 CWRU students run amongst the clouds of vibrant colors at Holi, enjoying the traditional Hindu welcome of spring.

Standing in a circle with our minds set on bags of colored powder, eyeing the friends we would soon douse, we were ready to begin. The countdown ended, the crowd went wild and then suddenly beautiful—and slightly suffocating—clouds of color rose into the air. Soon, the air was so thick that everyone had given up on not bumping into each other, and instead gave themselves over to the color, embracing the haze of happiness. The frenzy lasted for only a few minutes, but the smiles and laughter that it created could fill a lifetime. Those of us who attended Holi on Freiberger Field indeed had the time of our lives.

Friday, April 1 was the first Holi that I had the privilege of celebrating, and it was more beautiful that I could ever have imagined. Organized by the Center for International Affairs, the Office of Multicultural Affairs, the Undergraduate Indian Student Association and Satrang, the event celebrates the Hindu holiday that rings in the spring. Despite feeling like the powder would never come out of my hair, the feeling of partaking in such a magnificent and meaningful celebration of spring warmed my heart, despite the cold and windy conditions.

Holi is one of the oldest festivals in India and its meaning has changed slightly over centuries. However, the overarching theme remains celebrating the victory of good over evil, with the holiday specifically observing the death of the demon Holika at the hands of the deity Krishna. It also commemorates the power of love, namely that of Krishna and his consort, Radha. Some stories also describe Holi as an attempt to make the human race more colorful and I am sure everyone who attended Case Western Reserve University’s celebration would say that objective was achieved, and then some. It is, after all, the “festival of colors”.

While also creating visual beauty, each of the colors have a very special meaning in Hinduism. First we have blue, which symbolizes courage, power and the right actions that can contain evil. This originates from Shiva, the Destroyer, a deity who saved the world when he drank poison, turning his throat blue. Next is green. This color is related to Rama, an avatar of the god Vishnu, who was exiled to the forest, and symbolizes vitality and rebirth. Then we have yellow, which is related to merchants, and represents sincerity and piety. Yellow also has origins in turmeric, a spice that has been widely used throughout history and is quintessential to many South Asian dishes. In the festival, it symbolizes joy, sincerity and peace. There is also red, which has ties to matrimony, fertility, love and beauty. In Hindu culture, joyous matrimony is symbolized by bindi, a red dot in between the eyebrows. There were also lots of purple and orange mixed into the frenzy, representing spirit and strength, respectively. Perhaps my favorite color of the event was pink, which represents kindness and compassion. It was so pigmented and mesmerizing, surrounding everyone in a sunset-like haze.

There were a total of three rounds of color throwing, and each was somehow more exquisite than the previous. Each time, the participants became even more colorful and everyone slowly became their own piece of chaotic art. Even the ground turned into a masterpiece as the colors were worked into the soil by the hundreds of running feet.

By the end of the second round nearly every part of my body was covered by color. It was in my nose, my mouth and had even found its way into my socks, despite my wearing closed shoes. My friends and I all stood there, laughing with each other in joy, creating clouds of color as we shook our heads. Others present shared these feelings; with one participant yelling, “I am all color now and I am free!”

The color followed me all the way back to the North Residential Village, and I have to admit that I was slightly sad to wash it off. Despite the physical remnants of the celebration being washed away, my first Holi festival will certainly be something that sticks with me for a long time. It was so magical to see how it touched the soul of everyone present, and I cannot wait to celebrate again next year.