Hindu celebration brings a splash of color to campus 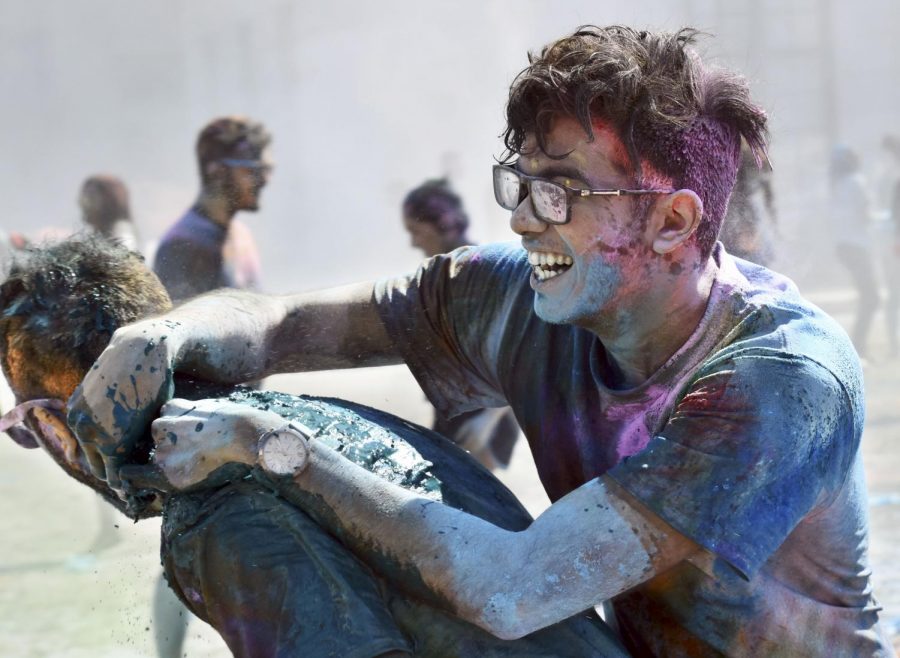 Two participants of Holi enjoy the warm day while covered in pigments of color.

If anyone were to look at Freiberger Field in the days following Saturday, April 6, they would see a riot of colors. Purple, blue and pink smears of powder across the field were the only remnants of the annual Holi event. A joint venture between the Center for International Affairs, the Office of Multicultural Affairs and the Office of the Provost and First Year Experience, the festival has turned into one of the campus’ biggest events.

While at first it was part of an initiative to educate the community on various festivals around the world, Holi has also helped international students fully enter into the Case Western Reserve University community and combat homesickness.

Holi, the festival of colors, consists of celebrants throwing colored powder and water at one another. The variety of colors used in Holi celebrations are culturally symbolic and are part of an old Hindu legend about the god Krishna. Primarily celebrated in Southeast Asia, it is meant to signify the beginning of spring.

Cami Ross, the coordinator of programming and study abroad advisor at the Center for International Affairs, was one of the main event planners and declared it a huge success. Several hundred people were in attendance. Comparing the turnout to last year’s, Ross was able to point to the better weather as being a major factor in people enjoying themselves. The event provided free catered food along with street food and snacks that are not usually available around campus like kulfi, an Indian ice cream, and mango lassi.

Student organizations such as the Undergraduate Indian Students Association also took part in the event. Student volunteers were integral to the logistics, Ross emphasized. The festival used a large amount of color powder that had to be poured into individual bags and students rose to the task to help the staff.

In addition to the colorful fight, there was a sprinkler set up to shower everyone playing with the colored powder in water. A dunk tank provided a quicker wash, with students eager to see their friends dunked. For those who wanted to stay drier, there were other activities set up. Flying kites proved to be the most popular activity, with nearly 100 circulating among the participants.

The kite flying helped to educate people about Basant, another spring festival held on the subcontinent. Posters around the check-in desk also assisted in introducing the traditions of Holi to those who came to celebrate. And of course Bollywood music, easy to sing and dance along to, aided in establishing a festive atmosphere to build a cohesive community.

Generally, there was a positive response among students. First-year nursing major Hannah Xu talked about how the event helped her understand and appreciate the different walks of life people on campus came from, and she expressed her excitement in being part of different cultural celebrations. At the end of the event, students covered head to toe in color returned to their homes, while the colorful field would remain a testament to the excitement of the festival for days to come.