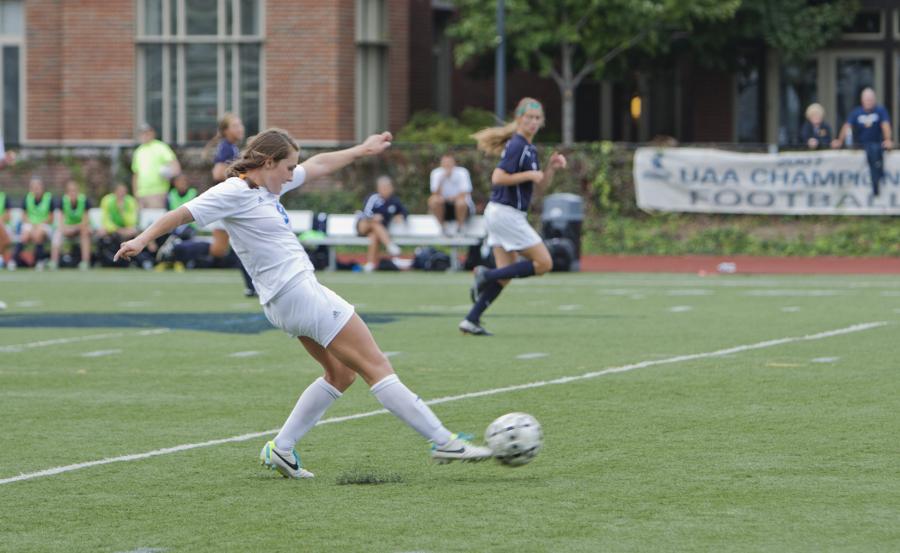 The women's soccer team split the opening weekend of the season and looks prepared for good season ahead. Christina Tam/Observer

Chants of “C-A-S-E, Case, Case, Case” filled the warm summer night as the women’s soccer team kicked off the first home game of the season against Ohio Wesleyan on Friday night.

The Spartans capitalized on the home crowd energy to grab a strong 2-0 win over the visiting Bishops last Friday, before dropping their follow-up game on Sunday against nationally ranked Thomas More.

The Spartans started the game with strong passing after the Ohio Wesleyan kick-off. The Spartans’ possession allowed for strong runs from the forwards into the Battling Bishops’ backfield. Strong runs by Jessie Sabers, Alexa Williams and Christine Straka throughout the first half kept the Bishops on their heels and unable to mount a solid run into the Spartan half. However, it was sophomore forward Jennifer Zajic who broke through first as she collected the deflected save from Mahya Krouse’s shot and put it into the back of the net to put the Spartans up in the 37th minute.

Krouse, who had her first good shot deflected and then put in the goal by her teammate was able to bury a goal of her own in the 86th minute. This was her first goal as a Spartan and helped shut down any hope of a Ohio Wesleyan comeback. Abbey Smith didn’t even have to record a save as the Spartans outshot the Bishops 17-1 and Smith picked up the shutout and her ninth career win.

The strong start was rocked on Sunday, however, as the Spartans found themselves on the losing end of a 2-0 scoreline. The first loss for the Case Western women came at the hands of number 13 nationally ranked Thomas More College.
Olivia Huber scored both goals for the Thomas More Saints. Her first shot came off of a penalty kick at the 19:01 mark that Spartan keeper Smith was unable to read. The Spartans battled back but were forced to rely on their defense to remain in the game. The Saints not only outshot the Spartans 11-4 but also had a 8-1 advantage in corner kicks. Smith stopped six shots but it wasn’t enough as Huber snuck an insurance goal past Smith in the 57th minute.

The Spartans will be looking for a boost from the home crowd and look to return to their successful passing and possession game when they face-off against Wittenberg University tomorrow. The Spartans will be the first game of the two sport doubleheader at DiSanto field, when they kick off at 1:00 p.m. in advance of tomorrow night’s football game.