Home woes have put a damper on women’s season 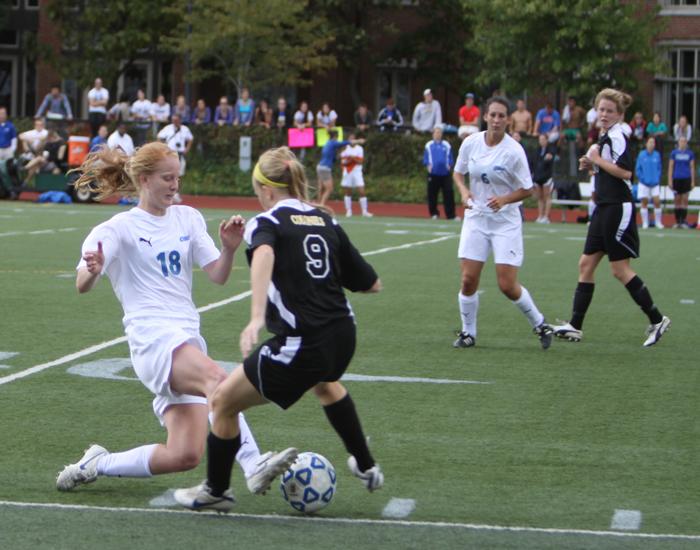 It’s been a tough week for the Case Western Reserve University soccer team as a 1-2-1 record in its past four games has seen the Spartans fall from No. 13 to unranked in the National Soccer Coaches Association of America poll. Case (3-2-2), which entered the season ranked No.17, has shown flashes of brilliance at times so far this season but has also struggled.

The Spartans, who are currently ranked No. 4 in the Great Lakes Region, tumbled from the top spot after they were dismantled in their home opener 3-0 by current No. 13 Centre College. Centre (5-0-0) has shot up in the national rankings after a turbulent first few weeks that saw No. 20 Ohio Northern University plummet out of the top 25 after a pair of season opening draws, one to Case, before climbing back in the rankings. The Polar Bears are currently second in the region.

The flashes of brilliance the Spartans have provided came quite early this season, often on the legs of sophomore forward Jessica Sabers, who has scored five goals in seven games so far this season. Sabers provided the tying goal against then No. 12 Ohio Northern and scored the opening goal against the College of Wooster in the Spartans’ 3-1 victory over the eighth ranked team in the Great Lakes Region.

At the same time, however, the Spartans have struggled at home, going scoreless in their first two games. The loss to Centre wasn’t too much of surprise given the Praying Colonels’ perennial position near the top of the region. The kicker for the Spartans was losing 3-0 at Case Field, where the Spartans performed exceptionally well last season, going 8-3-2 while never giving up more than one goal in any game.

The home woes continued for Case when they hosted the struggling Tigers of Wittenberg University. The Tigers (1-2-2) went toe-to-toe with the Spartans in Cleveland and came away with a scoreless draw. Case certainly had opportunities to score in the 110 minutes of action, tallying 21 shots, but just 6 of those were on target. The Tigers, however, were able to put much more pressure on the home team, putting 9 out of their total 15 shots on goal.

In the Spartans’ Wednesday night match against Baldwin Wallace University on Sept. 19, Case finally managed to get on the board when Sabers scored her fifth goal of the season to give the home team an early lead in the seventh minute. Unfortunately the Yellow Jackets could score just as well, scoring seven minutes later to tie the game. Rachel Bourque scored again in the 21st minute to put Case ahead and put an apparent end to Case’s inability to score at home.

Up 2-1 however, the Spartans were unable to contain the Baldwin Wallace attack as the visitors tied the game before the half before notching the two go ahead goals early in the second half. The 4-2 loss for the Spartans will mean they fall to 3-2-2 and face a tough challenge to mentally prepare themselves in the upcoming weeks.

The Spartans will have big pair of matches early next week that will be instrumental to entering the highly competitive University Athletic Association conference schedule with momentum. On Saturday Sept. 22, the Spartans will travel to Bexley, Ohio to take on Capital University, a team that is typically ranked in the region but currently finds itself just outside the top 10. The Spartans beat Crusaders 1-0 last year at home.

Case will play at nearby rival John Carroll University on Monday night, Sept. 24, down Fairmount Blvd. in University Heights, Ohio. The Spartans and Blue Streaks have a fierce rivalry and although John Carroll isn’t ranked in the region, the two teams have split the past four matches 2-2 including a 1-0 loss at home last year for the Spartans.

Hopefully the Spartans have gotten their home woes out of their system as Case will host New York University in the opening game of the conference season on Saturday, Sept. 29 at 5 p.m. The Spartans finished second last year in the UAA and will need a strong opening showing at home if they hope to repeat that performance and make it back to the NCAA playoffs for the second straight season.