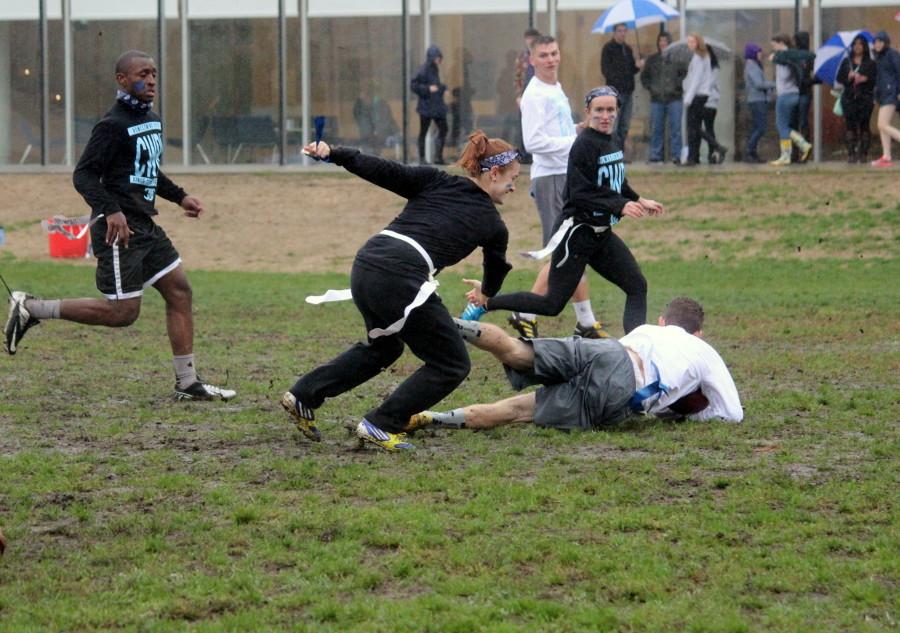 The rain and mud made for a slippery flag football game.

In typical Cleveland fashion the 2015 Homecoming kickoff event was in danger of cancellation due to the rain. In typical Case Western Reserve University fashion that threat of rain didn’t stop the fun.

As grey clouds refused to yield and continued to mist down on campus, students gathered in the Tinkham Veale University Center and on Freiberger Field for the 2015 Homecoming Kickoff event. The CWRU Homecoming 2015 Kick-off event co-sponsored by the Homecoming Committee, Class Officer Collective, University Program Board and the Student Leadership and Activities Office. The kickoff was suppose to be comprised of both a Freshmore Pushball game ( where first and second year students play each other) and the first annual co-ed flag football game between the junior and senior classes.

Pushball is a revived tradition where classes push a giant ball towards the opposing team’s end-zone in a type of reverse tug-of-war competition. The flag football game replaced earlier “powderpuff games” where only females were allowed to play by allowing both men and women to participate. Unfortunately the pushball game was postponed and only the flag football game took place.

Despite the letdown of not being able to have the pushball game, the excitement surrounding the flag football game continued, as the wet squish of Freiberger Field was not enough to warrant a cancellation of the game and the slickness of the ball and the soft ground made for an even more interesting matchup between the Junior and Senior teams.

In the match, there was no tackling allowed and instead flags were worn from belts. The game had many built in rules to ensure that there was no advantage and to keep the play balanced between everyone. In addition the game was played on a 50-yard field rather than a full 100-yard. The field the playing field was 30 yards long with 10 yards at each end for the end zones, and teams had to make it 15 yards for a first down, only one per possession.

The third-years, wearing white long sleeved jerseys, were able to score first and with a completed point after attempt found themselves up 8-0. The Juniors were able to hold the fourth years, wearing black jerseys, at bay in the accidentally short first half and that lead continued into the half.

The teams traded blows and found themselves at 28-20 and out of time but for the remaining seven plays allowed to finish the game, and the trailing third-years in control. In exciting fashion, the game came down to the final play as a broken up pass destroyed the Seniors’ dreams at the comeback and secured a victory for the Juniors.