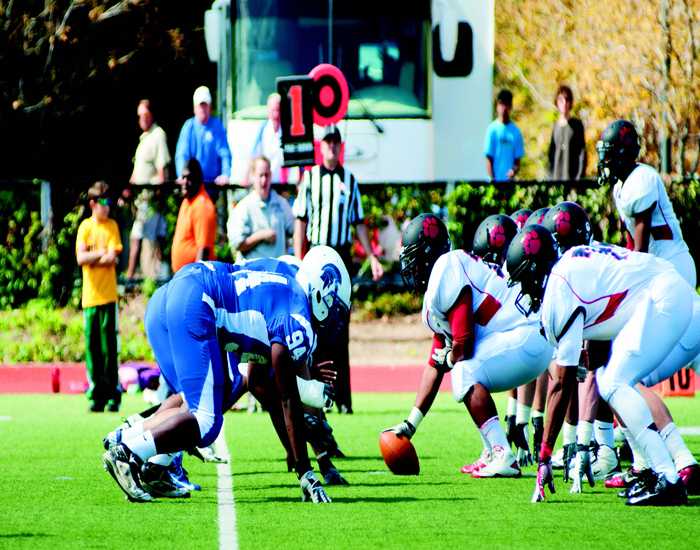 It’s Homecoming at Case Western Reserve University and, as the leaves begin to change color here in Northeast Ohio, the fall sports season is just getting started. Saturday the football team will look to recover from back-to-back heartbreaking last minute losses to Frostburg State University and Ohio Wesleyan University. The men’s soccer team looks to begin the defense of its 2011 UAA title against the new-look No. 6 New York University Violets. Meanwhile the women’s soccer team looks to find the same luck it has had going 5-0-1 on the road at home, where it has struggled so far. The women will take on the Violets in a rematch of the Spartans’ 1-0 victory over the UAA’s fourth place team last year.

The Spartans and Tigers have played only nine times on the gridiron and will be facing each other for the first time since 1999. Wittenberg University owns an 8-1 lead in the all-time series and has won six straight meetings. The Tigers defeated the Spartans in Cleveland, 49-21, when the two met last on Oct. 23, 1999. The lone Case Western Reserve University win in the series came by a score of 14-13 in Springfield during the 1991 season. The first-ever meeting between the two resulted in a 31-22 Wittenberg win at home in 1989. The two schools met annually from 1989 to 1993.
Spartans

How They Got Here:

The Case football team will look to rebound from its first back-to-back losses since 2006 when it hosts the undefeated Wittenberg for Homecoming tomorrow, Sept. 29 at Case Field.

The Spartans kicked off the season at Marietta College, where the offense recorded 415 total yards including 196 through the air and another 219 on the ground on their way to a narrow 26-23 victory. The best game of the season came on week two against Hiram College. The Spartan offense collected 295 yards through the air as part of a 426 yard output. The defense recorded 31 tackles, including two sacks. Last week, Case dropped a second-straight last-minute heartbreaker, 17-14, at Ohio Wesleyan University.
Scouting the Spartans:

Four games into their 2012 season, the Spartans have averaged 22.8 points along with 143.2 yards rushing, 217.0 yards passing and a total of 360.2 yards. The defense has held opponents to an average of 14.2 points per game, 75.2 yards rushing, 228.2 yards through the air and 303.4 total yards per game. The Spartans hold a -8 turnover ratio. The Spartans have won five consecutive Homecoming games dating back to 2007, with all five victories coming against North Coast Athletic Conference schools.
Spartans to Watch:

Manny Sicre, running back – In the loss to Ohio Wesleyan, Sicre displayed his finest performance this season. The sophomore rushed for 123 yards on 32 carries (3.8 yards per carry). He also made five receptions for 65 yards and recorded a touchdown. On the rushing front, Sicre has consistently improved since the start of the season, with increases in rush attempts and yards rushing.

Erik Olson, quarterback – The senior has recorded six touchdowns throughout the first four games of the season, with two games in which he passed the 200-yard mark. Last time out, Olson completed 64.9 percent of his passes (24 of 37) on his way to 241 yards and a touchdown. While a heartbreaking interception ended the game, it is hard to ignore the consistency that Olson has shown.

Adam Watson, defensive end – Thanks to a quarterback sack last weekend against Ohio Wesleyan, Watson and junior end Brandon Bryant have helped propel the Spartans to a UAA-leading 12 sacks this season. The Spartans posted six sacks during the first week against Marietta and have recorded two each week since.
The Coach:

At the helm is head coach Greg Debeljak, who is in his ninth season with the club.
With an overall 63-25 (.716 winning percentage) record, Debeljak has led the Spartans to four UAA Championships in five years, including three consecutive undefeated (10-0) regular seasons from 2007-09. Since the beginning of the 2007 season, Case has posted an outstanding overall record of 50-8 with back-to-back-to-back NCAA playoff berths.

As the saying goes, “speed kills,” and that is how the Spartans offensive game can be summed up so far. The rushing combination of Sicre and junior running back Kenny Riordan have combined for 116 rushing attempts for 553 yards and three rushing touchdowns. Sicre has a team-high 344 yards rushing on 86 carries (4.0 yards per carry) with three touchdowns. The sophomore has nine receptions for 158 yards and two scores. Riordan has recorded 209 yards on 30 rushing attempts for one rushing touchdown.

Olson has completed 66 of 106 passes (62.3 percent completion rate) for 850 yards with six touchdowns and five interceptions. His finest performance of the season came again Hiram, when the Pennsylvania native completed 22 of his 30 passes in route to a career-high 277 yards and three touchdowns. Sophomore wide receiver Sean Lapcevic has posted a team-high 19 receptions for 296 yards (15.6 yards per carry) and a touchdown.

Senior outside linebacker Ryan Ferguson has recorded a team-high 38 tackles with a forced fumble and two pass break-ups. Senior linebacker Wade Self has 35 stops with a pass break-up and a blocked punt. Fellow linebacker Kevin Nossem has a pair of forced fumbles to go with his 33 tackles. Senior nose guard Michael Harris has 23 tackles and is tied for the team lead with 3.5 sacks. Senior tackle Collin Desens has recorded 28 tackles and three sacks, while Bryant has 15 tackles with a team-high 6.5 tackle for loss and 3.5 sacks. Senior outside linebacker Michael Fioramonti and junior safety Jordan Banky each have an interception.
Special Teams:

On special team, the Spartans average 21 yards on kick returns and 18.3 on punt returns. Lapcevic has recorded 164 yards on seven kick returns, averaging 23.4 yards. Senior safety Dan Calabrese has made four kick returns for 58 yards and another five punt returns for 75 yards. Freshman Alex Ojeda has made 6 punts for a total of 237 yards, averaging 39.5 yards. The Spartans have not yet recorded a return for touchdown this season.

Freshman kicker Won Kun Park has already established himself as a reliable scoring option. In the first four games of the season, Park has completed 10-of-12 extra point attempts (83 percent completion rate) to accumulate 19 points. For field goals, the freshman completed 3 of 5 attempts with the longest being a 33-yard shot.
Tigers

How They Got Here:

The Wittenberg Tigers started the season with surprisingly comfortable victories over Capital University and DePauw University. In their first game, Tigers routed Capital with a 44-17 victory and in the second week, Wittenberg continued its offensive tidal wave with a 52-14 win against DePauw. In the third week, the Tigers emerged from the College of Wooster unscathed with a 17-7 victory.

Throughout their first three games, the Tigers have averaged 37.7 points, 181.7 yards rushing, and 277.3 yards passing, for a total of 459 yards. Wittenberg has held its opponents to an average of 12.7 points per game, 109.7 yards rushing, 122.3 yards passing, and limited the opposing team to an average of 232 total yards per game. The Tigers have a +6 turnover ratio. After completing the 2011 season with an 8-2 record in the North Coast Athletic Conference, Wittenberg was once again picked as a favorite to win the NCAC.
Tigers to Watch:

Reed Florence, quarterback – The junior turned in an outstanding performance in his first collegiate starting assignment by leading the Tigers to a 44-17 victory in the season opener. He completed 17 of 30 passes for 320 yards, two touchdowns, and ran for a pair of scores. Florence then topped his own performance against DePauw, going 16 of 19 for 294 yards with three touchdowns through the air. He also had eight rushes for 46 yards and a touchdown.

Victor Banjo, cornerback – Banjo had one of his finest collegiate matches against Capital with four solo tackles along with an interception. His blocked punt led to Wittenberg’s fourth touchdown of the first half. Banjo then added another two tackles and another blocked punt in the win over DePauw. The junior transitioned from track to football after earning All-American honors in the 55-meter dash at the NCAA Division III Indoor Championship.

Jon Daniels, defensive end – The senior was named the NCAC’s Defensive Player of the Week after the Tiger’s 17-7 victory over Wooster. Daniels recorded four tackles, forced two fumbles, and was an overall game-changer against the Scots. He also recovered a third-quarter fumble on Wooster’s five-yard-line that led to the Tigers’ game-winning touchdown.
The Coach:

Head coach Joe Fincham will be representing the Tigers on the sideline. The Ohio University graduate has led Wittenberg to a 147-33 overall record, including an impressive
98-15 NCAC record (.867 winning percentage), and a 9-8 playoff record. Under Fincham, the Tigers have won eight conference titles and helped him earn seven NCAC Coach of the Year awards.

Florence has completed 46 of 74 passes (62.2 percent completion rating) for 762 yards, seven touchdowns, and five interceptions. He has also compiled 26 carries for 134 yards for three scores. Sophomore running back Will Stocker has rushed for a team-high 169 yards on 42 carries (4 yards per carry). However, the sophomore has yet to record a touchdown. Freshman running back Jimmy Dehnke has 162 yards rushing on 35 carries (4.6 yards per carry) and two touchdowns. Dehnke is averaging 54 yards per game.

The Tigers are ranked at the top of NCAC on defense. The defense has 122.33 yards per game on pass defense with a pass efficiency defense of 80.49 which is ranked 13 out of 239 teams and number one in NCAC. Total defense only allowed 232 yards ranks 19 out of 239 teams and, once again, first in the NCAC.

Senior kicker Sean Williams, who tied the school record for the most successful field goals in a season (12), entered the 2012 season ranked first in Wittenberg history for career field goal percentage with 80 percent and extra point percentage at 96.7 percent. The senior has made 3 of 5 field goals and 14 of 15 extra point attempts this season.

He now has 180 career points and stands fifth in the program’s history, after surpassing 1969 graduate Fred Mitchell during the 52-14 win over DePauw. The Tigers have recorded an average return of 8.6 yards on 11 punt returns and another 21.3 yards on 8 kickoff returns. Junior wide receiver Desi Kirkman is ranked No. 33 in all of Division III thanks to his 10.9 yards per punt return.
Prediction: Case 24 Wittenberg 21

This game will be a tough matchup for the Spartans. In the end, it will come down to which team grinds it out the most. The Spartans have a great running combination in Sicre and Riordan, but the Wittenberg defense has held opponents to just over 100 rushing yards per game. The Tigers have their own running combination in Stocker and Dehnke, and it will cause disruptions for the Spartan defense. Both teams will play at a higher tempo for this game, but the Spartans will edge Wittenberg in the final minutes as the defense provides a critical stop.

It has been more than a decade since the last meeting between these two powerhouses. While Wittenberg holds the head-to-head advantage against Case, the Spartans have won five consecutive Homecoming games dating back to 2007 with all five victories coming against NCAC schools. This will be the second straight week that Wittenberg will serve as a team’s homecoming opponent. The Spartans hope the trip home and the Case Field magic will be on their side as they seek to avoid three consecutive losses for the first time since 2006.