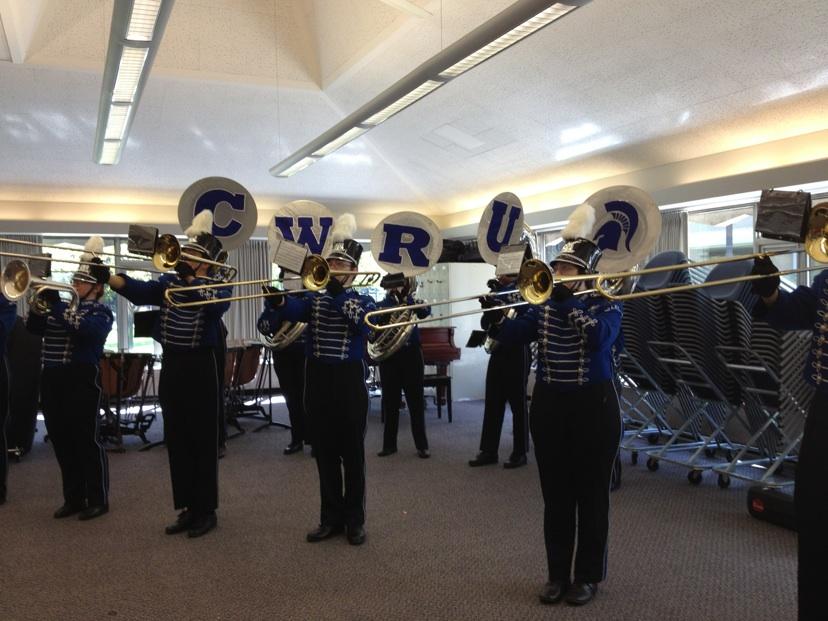 With windows wide open in this sunny weather, students in North Residential Village common rooms hear an interruption like no other twice a week.

“What is that?” is a question that often resonates around my residence hall.

After performing for four years in my high school’s marching band, the sounds have never been a mystery to me. Drummers pound out steady rhythms as trombones and trumpets squeal a jazzy melody. This year’s Marching Spartans’ theme, related to the songs of famous jazz musician Chuck Mangione, breaks away from cookie-cutter pop shows the band performed in years past.

“I chose this show because it’s a little bit different, but still fun to play and interesting to listen to. It’s still popular in a way- it’s something people will enjoy,” said marching band directora Crystal Sieger. Surprisingly, shows like the Marching Spartans’ are not uncommon in marching performance.

The Marching Spartans performed their first halftime performance last Saturday. While the band’s show was not completed because of limited time, Sieger believes the band performed very well. “There’s always that element when people are concentrating a little harder during an actual performance; everyone always steps it up,” she stated, regarding the band.

As this is her first year directing Case Western Reserve University’s marching band, Sieger must depend heavily on student leadership. With fewer upperclassmen than freshmen and sophomores, this would seem problematic at first. However, at a school like CWRU where leadership is central to the student community, Sieger had nothing to worry about.

According to Sieger, the returning members of the band have been “invaluable to success so far.” Practicing for only two hours twice a week, the band has made remarkable progress since I first started listening from my common room window. At first, muddled melodies barely rang out over the constant ticking of the metronome and shy solos hid. The high notes made me wince and the overall effect was not positive. However, like most practiced marching music, the sounds gradually improved.

Now, I wonder which song they are playing as the clear music flows in through the cracked windows every Wednesday and Friday. I find myself listening intently to their music, wondering how on earth such a small band could play so well.

As much as it pains me to admit, CWRU’s band of just 63 members already sounds more musical than my high school band of 130.

With homecoming arriving in just a week, the tension is rising for the band to put on a good performance. Their show will still not be complete, but the band will have one more part of its marching drill memorized for the halftime show. This will make the performance much more active than their debut at the last home game.

Sieger’s goals for the band are to complete the show’s drill by the end of the season and to eventually memorize all the show’s music.

Regardless of their lack of experience, the band should impress any audience it gains. By performing as well as they do with only a handful of practices, the Marching Spartans are an inspiration to any musician.