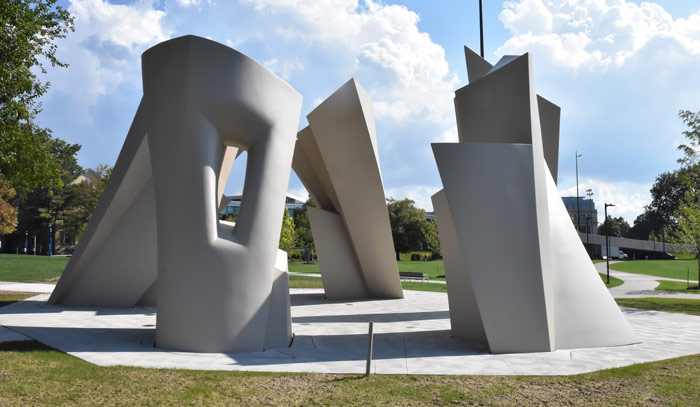 Courtesy of The Daily

Philip Johnson's sculpture, moved from its original location where Tinkham Veale is now, is a prominent feature of the greenspace—ignoring the artist's anti-Semitic sentiments and actions.

Philip Johnson is a son of Cleveland. According to some, his story is that of a world-class architect, best known for his Glass House design. In 1932, Johnson became the first architecture and design curator at New York’s Museum of Modern Art. Today, the acclaimed Harvard College graduate has pieces of his “Turning Point” collection featured on Case Western Reserve University’s campus. CWRU’s promotional materials described his legacy simply as “celebrated” and “world-renowned.”

Yet, Johnson has another past, conveniently ignored, that prompts article titles that openly question just how much of a Nazi he was. With “cancel culture” allegedly raging, one might suspect that this query amounts to hyperbole. It does not.

During his travels around Europe in the 1930s, Johnson found himself, where else, but at a Hitler Youth rally near Berlin. He was no bystander, either. In his writing, he excitedly described his joy at the spectacle. Once he returned home, he focused on bringing a similar fascist movement to the U.S. Not just an avid fan, Johnson actively wanted to recreate the Nazi’s rise in Germany back at home. To do this, he would find himself in the company of “America’s No.1 Intellectual Facist,” Lawrence Dennis, spending their time together floating on how to, “bring about America’s Facist future.”

Johnson aspired to be the Albert Speer to America’s own facist leader. Looking for an American Hitler, Johnson was enamored with Senator Huey Long before he was assassinated. He then turned his attention to another public figure, Father Charles Coughlin.

Coughlin used his vast radio audience to spread conspiracies about Commnuist Jews and their plot to take over the country. At one point, Johnson was tasked with designing the platform for one of Coughlin’s rallies. He would go as far as attempting to recreate the one located in Zeppelin Field in Nuremberg where Hitler held large rallies every year. Johnson also wrote for Coughlin’s paper, ironically titled “Social Justice,” where he repeatedly espoused his antisemetic views.

Johnson was not simply standing on the sidelines, he was on the front lines of mirroring the Nazi rise in the U.S.

His Nazi ties were so extensive that, at one point, the FBI was concerned that he might be acting on their behalf. This led to his surveillance and some subsequently illuminating anecdotes in a dossier that was compiled.

Like many white men, Johnson’s privilege, wealth and connections helped him avoid the scrutiny of his past. Recently, however, that has begun to change.

On Jan. 18, a collection of “architects, designers and artists” called on the Museum of Modern Art to remove Johnson’s name “from every leadership title, public space, and honorific of any form” due to his ties to Nazi sympathizers and the Facist movement in the U.S.

Johnson’s “Turning Point” sculpture on campus was moved during the construction of the Tinkham Veale University Center. In August 2019, it was relocated to the John and Mildred Putnam collection, located in East Bell Park—the green space next to the Weatherhead School of Management across from Mather Quad.

It is unclear who decided on the sculpture’s placement, or if they had knowledge of Johnson’s white supremacist past. But as long the collection remains prominently displayed on CWRU grounds, it represents the university’s stance that a known Nazi and fascist’s values are not only unproblematic, but also welcomed and deserving of honor.