House of Wills seance brings the dead back among the living 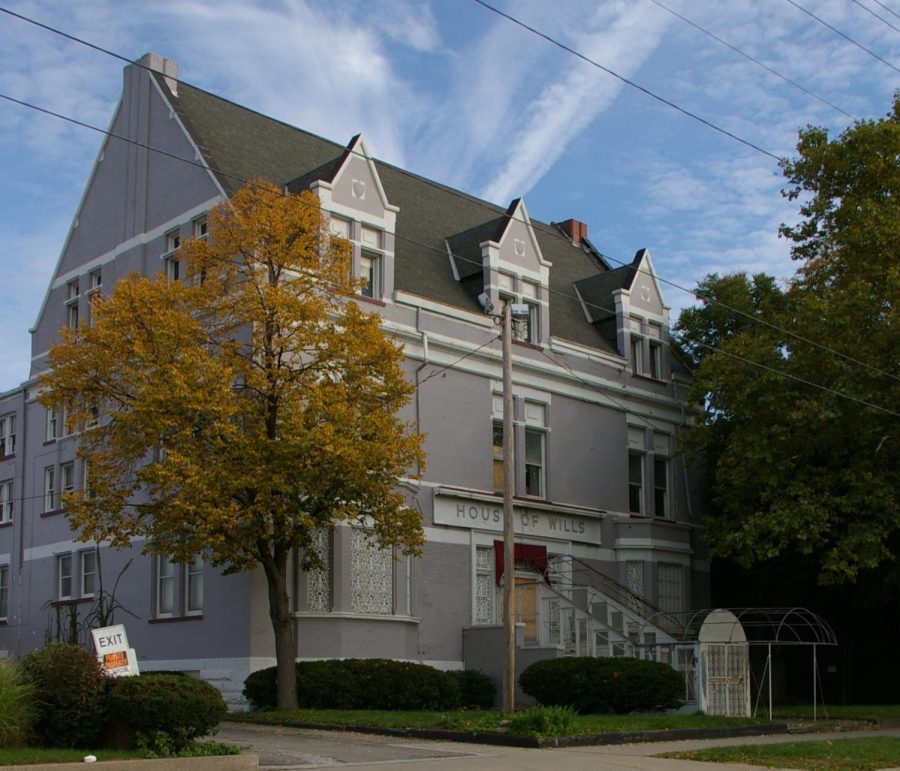 This is a first person account of a seance at the House of Wills, an abandoned funeral home in Cleveland. The article features references to the occult and Satanism.

I’m running late to the seance.

Despite my plans to arrive at the historic, haunted and infamous House of Wills 30 minutes before the seance is set to start, an email sets me back. It’s from the Cleveland Area Paranormal Society (CAPS), telling me that I should come prepared with a white head cover, like a scarf or hat, in order to best protect against spiritual possession. I settle on a light pink ski cap.

With my head now protected from pesky spirits, I have the challenge of finding the house. Driving down the mostly abandoned E. 55th Street, it’s too dark to find the building by the address alone.

“Just look for the most terrifying building on the block,” I tell my Lyft driver.

We find it based on my description. The building is massive and ominous, with an exterior scarred by swatches of fading baby blue paint peeling off the walls. It gives the impression that, even in daytime, the house can only be viewed when shrouded in darkness.

A small group of people have gathered at a side entrance. A table decked out in the CAPS logo is manned by chatting staff members. I check in for the seance. I’m told that the mediums are making sure the room we’ll be in is properly blessed and ready for us.

In the meantime, I have to sign a waiver. A staff member hands me a sheet of paper filled with precautions I would expect for entering a building abandoned since 1995.

“And if you get possessed, we’ll do our best to get you de-possessed,” the staff member tells me. I don’t ask if she’s joking.

When it is ready, they lead us into an underground room that was formerly used to showcase caskets. House of Wills used to be a funeral home, but that is just one of the building’s many past lives. The house previously served as a school and an opera house before becoming the biggest black funeral parlor in the state and one of the biggest black-owned businesses in Cleveland.

But tonight, it’s for calling the dead. A medium in loose white garments welcomes us. She stands next to an altar covered in candles, glass cups, a bottle of rum, cigarettes and pictures of holy figures. There are folding chairs spread around the room that we are instructed to arrange in a circle.

Our group has about 15 people, including a mother, her two daughters and a couple other people who have come on their own. But the majority of the people participating in tonight’s seance appear to be part of the CAPS staff or one of their friends. There is a paranormal investigator, a couple of witches and a man from Germany who can apparently see spirits as easily as the medium.

Unlike the Halloween ceremony a couple nights before, which was double the size and filled with curious interlopers, tonight’s event is a friends-and-family affair. Almost everyone knows each other, and they ease themselves into a familiar rapport. I attempt to replicate this with the woman sitting next to me.

“I’m scared to be in the dark,” I say, gesturing to a dim bulb in a nearby hallway, our only light source, which I assume will be turned off soon, enveloping us in darkness.

“It won’t be in the dark,” she tells me, with the hint of an eye roll.

I would later learn that this woman was a medium herself, and the light would stay on all night. But for now, I end the conversation with the unique humiliation of getting shut down for not knowing the basic mechanics of a seance.

The ceremony begins with prayers, recited robotically by the medium. We cleanse ourselves with some sort of blessed elixir of blue liquid, an extra level of protection against possession. The medium makes one final call and the Circle of Death is officially opened.

The messages from the spirits pour in, and it becomes clear tonight is not for me. The spirits want the young witch to continue her practice of the dark arts, no matter what people say. The investigator has let an angry spirit into his life that is screwing up his relationships. In the emotional climax of the night, the mother receives a message of forgiveness from her mother, leading to sobs across the circle.

It is a good hour before the medium turns her attention to me. She wants the young man in the pink hat to know that he’s finally receiving a message, but she can’t quite figure out which spirit is contacting me.

She quickly realizes, it’s not a spirit asking me this question. It’s the house itself. Her eyes flit around the circle. She can see spirits surrounding every single person in the circle but me, and she knows why. My ancestors have blocked off any spirits from communicating with the mediums tonight. They don’t want me to be here, so what am I doing here? In the worlds of both the living and the dead, I am the least important person here.

I did not come prepared. Unlike me, my seance-mates had all come with something to untangle. To name a few ailments: a lack of confidence in contacting the dead on their own, a supernatural presence in their home, deteriorating interpersonal relationships. No one else seemed to be driven by a macabre interest of simply witnessing a seance. I was the alien of the group, and I would be treated as such.

The well of spirits has run dry and it’s time to close the Circle of Death. We hold hands as the medium recites a final prayer. Once we unclasp from one another, the spirits are officially gone. Everyone rushes to the medium to thank her, hug her and leave tear streaks on her white clothing. I hang around until I spot an opening, an opportunity I take to thank her for the night.

“Of course. I hope you had fun,” she tells me, as if I was exiting an amusement park for the day. Behind me, I can hear someone sobbing.

I make my way back up to entrance and call a Lyft. I stand by the table where I checked in making small talk with staff members.

A man with thick black-rimmed glasses and slicked-back hair walks through the entrance. He comes bearing a massive pack of chicken fingers from a nearby fast food place and sets it on the table. It’s for the hungry staff wrapping up the night’s seance and any outside participants waiting for a Lyft to pick them up from a haunted house at 2:30 a.m.

He asks me, “Do you want some chicken?” I would later recognize him as Eric Freeman, the owner of the House of Wills and one of Cleveland’s most prominent Satanists, but for now, he is the man with the chicken.

I’m halfway through my chicken finger when a commotion erupts. It turns out, despite the precautions, someone had managed to get themselves possessed. The staff rushes to aid. Amid the chaos, there is a pounding noise and the sound of the medium yelling for someone to bring the cross.

I feel my phone vibrate with a notification that my Lyft driver is here. After spending the past three hours delving into the world of the dead, it’s a relief to be disturbed by something familiar. I wrap two chicken fingers up in a napkin, stick them in my pocket and head out to find the car.