How did Angelo Merendino talk about his wife’s cancer? 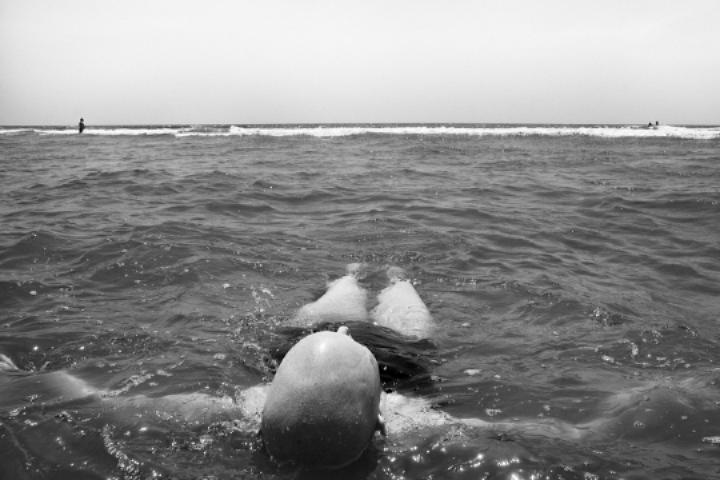 Angelo’s wife Jenny Merendino floats in water after going through chemotherapy. Angelo documented their journey when they found they couldn’t talk about possible death with loved ones.

In 2006, Angelo Merendino packed up his car in Cleveland, and he and his two cats drove to Manhattan. There, the love of his life, Jennifer, was waiting along with her two cats. Something neither could see was waiting, too.

Fast-forward past Angelo’s proposal on the first night they moved in together in Manhattan. Speed through a wedding, five months of marital bliss and stop, right here, as Angelo picked up the phone. It’s Jennifer, calling from her doctor’s. Angelo froze as Jen relayed the diagnosis: breast cancer.

According to the National Breast Cancer Foundation’s website, approximately one in eight women in the U.S. will be diagnosed with breast cancer in her lifetime. Of the over 200,000 breast cancer diagnoses in 2010 (the last set of available data), the Center for Disease Control reported greater than 40,000 deaths, at approximately a 20 percent mortality rate.

Jennifer survived the first round of cancer, but in 2010, a routine scan of seemingly healthy Jennifer showed cancer that metastasized, spreading to her bones.

Each cycle of Jennifer’s chemotherapy lasted 8-12 weeks, ending with a PET scan. A scan without new cancer meant that Jennifer repeated the cycle. New cancer introduced the Merendino’s to a different type of chemo, a new pill routine and unfamiliar side effects. New cancer or not, Jennifer continued to die.

To the Merendino’s, the hardest part was not deciphering clinical information about cancer drugs or long nights in the hospital, Jennifer grimacing in untreatable pain. Instead, at the second round of cancer, friends and family melted away when it became clear that Jen was going to die.

“It was really hard to watch the people you thought would be there and watch them fade away,” Angelo said.

“Not only were we open to talk about [our] experience, but we wanted to talk about it, we needed to talk about it,” Angelo said in an interview late last year. The Merendino’s informed loved ones of the signs that highlighted Jennifer’s worsening condition: She could no longer exercise or work.

“These are things that people didn’t understand…they would tell us to stay optimistic and not think bad thoughts,” said Angelo. Her condition was beyond that: “People [were trying to tell us to] put a band aid on a knife wound.”

When the Merendino’s delved into topics of death and mortality, many of their friends and family shut down. According to Angelo, some told the Merendino’s, “I just don’t do well dealing with this.” Angelo said, “Well…wow. It was if a bomb has been dropped on us and they were complaining about the aftershock, miles away.”

“I understand it was difficult for them. I was never mad. [We] were just frustrated and desperate that people wouldn’t listen. We knew it was hard for other people, but it wasn’t as hard for them as it was for us.”

Angelo acknowledged that death and mortality are hard topics to discuss. Particularly in the U.S., Angelo said, which regularly discards difficult topics, untouched. He felt that our society’s inability to talk about mortality made it harder for friends and family to relate to Jennifer’s sickness, and, for some, to be around her.

“It’s easy to get stuck in this moment and not want to talk about mortality because, if we don’t talk about it, then it’s not going to happen. [Then] you can just be happy,” Angelo said.

Before Jennifer’s diagnosis, Angelo was like that too. “Then all of a sudden, out of nowhere, five months after our wedding and Jen [gets breast cancer]. It was such a blindside,” Angelo said.

If people talk about mortality, it doesn’t mean that dying gets any easier. Angelo said, “I don’t want to die, I’m still afraid of death, but, in pushing to accept my own mortality, it has pushed me to embrace that I am alive.”

The confusion and frustration of Jennifer’s illness pushed both of the Merendino’s to start blogging. Jennifer started hers when she started having side effects, like certain sensations and emotions, which her doctors said were not medication side effects. With her blog, Jennifer had hoped to make non-clinical information available for those who were interested in her experience with treatment. Angelo blogged about his life: the feelings and lifestyle as a caregiver and a husband of a cancer patient. But still, the couple felt distanced from others.

Frustrated with the couple’s isolation, Angelo picked up his camera and began to shoot. A photographer by trade, Angelo had always photographed the couple’s lives together. These pictures pierced into the couple’s daily life for their distanced network of loved ones to see what it was like to live with cancer.

Angelo captured the nuances of their relationship—the trust in Jennifer’s eyes reflecting into the bathroom mirror as one of Angelo’s hands holds a camera, and the other, a buzzer to her scalp; a partial silhouette of Jennifer, bald, painting her toenails; the radiating warmth of Jennifer’s smile as the sun hits her face, her hands gripping a walker. Another shows a handful of abdomen as Jennifer gives herself an injection; there’s a selfie of the couple with Angelo holding the camera and an oxygen tube laced under Jennifer’s nose. Lastly, there’s a neatly made, empty bed in their apartment living room.

After Jennifer’s death in December 2011, Angelo felt numb, lost and exhausted. “For the better part of four years I watched a good woman suffer and die,” Angelo said. “Everything I thought I believed in was challenged.”

Photography drove Angelo’s life; it forced him out of his apartment each morning, the camera morphed into his defense mechanism. Behind the lens, the world shrunk into smaller, manageable pieces where Angelo could focus his attention. Surrounded by reminders of “what we faced,” photography, Angelo believed, prevented his depression from becoming overwhelming and unmanageable.

After a while, Angelo revisited the photographs of Jennifer. He spent two years living with the photographs—looking, thinking, feeling and adapting to their changing meaning. The photographs were integral to his healing: They prevented him from running away, they allowed him to feel pain and confront memories that he didn’t have time to process as a full-time caregiver.

The photographs became part of a project that began organically, with loose thoughts and unclear intentions, Angelo said. The photographs of Jennifer’s illness were joined by pre-cancer photographs, which Angelo structured into a photo documentary.

Angelo attributes the poetic feel in part to the ebook’s composition: the photos are not in chronological order. Instead, the book opens with a shot of the Manhattan skyline on the George Washington bridge, taken from the inside of a car: Angelo’s return to the city, after Jennifer’s funeral. A few pages later, there’s Jennifer on the couple’s honeymoon. But at its core, Angelo said, “the photo documentary is a love letter from me to Jen.”

In March 2013, Angelo and his two cats moved back to Cleveland. (Jennifer’s two cats had died of old age.) He still works as a photographer, doing portrait work and weddings. He even covered the trial of Ariel Castro and the demolition of Castro’s house for Getty and Corbin.

It’s still been a hard transition home: “It’s like what happened to those years…[Jennifer dying] seems unreal, still very much a foreign thought. I’m not in denial that [she died], [but the bad times in NYC] took the best thing in my life and it’s a struggle to believe that it all happened.”

Recently, Angelo’s been making strides with the nonprofit he started after Jennifer’s death. The Love You Share provides direct financial assistance to women with cancer undergoing treatment. The idea of direct aid came from the couple’s aversion towards the pink ribbon. The pair felt that donations to giant organizations like Susan G. Komen are thoughtful and kind, but, in their experience, the couple preferred direct support. For them, direct support—whether it was an “I’m thinking of you” text message from a friend or an act of random kindness—felt beyond the “superficial level” of walking miles for research. Instead, The Love You Share aims to alleviate part of the burden of current patients and their families with a model that provides a sense of community. The nonprofit received its status from the IRS in 2013.

All in all, Angelo doesn’t consider himself a spokesperson for caregivers or families of cancer patients, just someone who can share his story. But, that is arguably the most important thing he can do. “If we don’t talk about [mortality and experience], we’re hurting ourselves, we’re not going to grow.”

Angelo hopes that his experience encourages dialogue, “Not just about breast cancer, but about facing challenges, about finding something good in difficult situations, about listening more to other people.”

And if you want to listen to his story in person, Angelo will delivering a TEDxCLE talk in on April 4, as a part of the independently organized TED event. Tickets for the simulcast are still available at TEDxCLE’s website.