How to kiss Kate 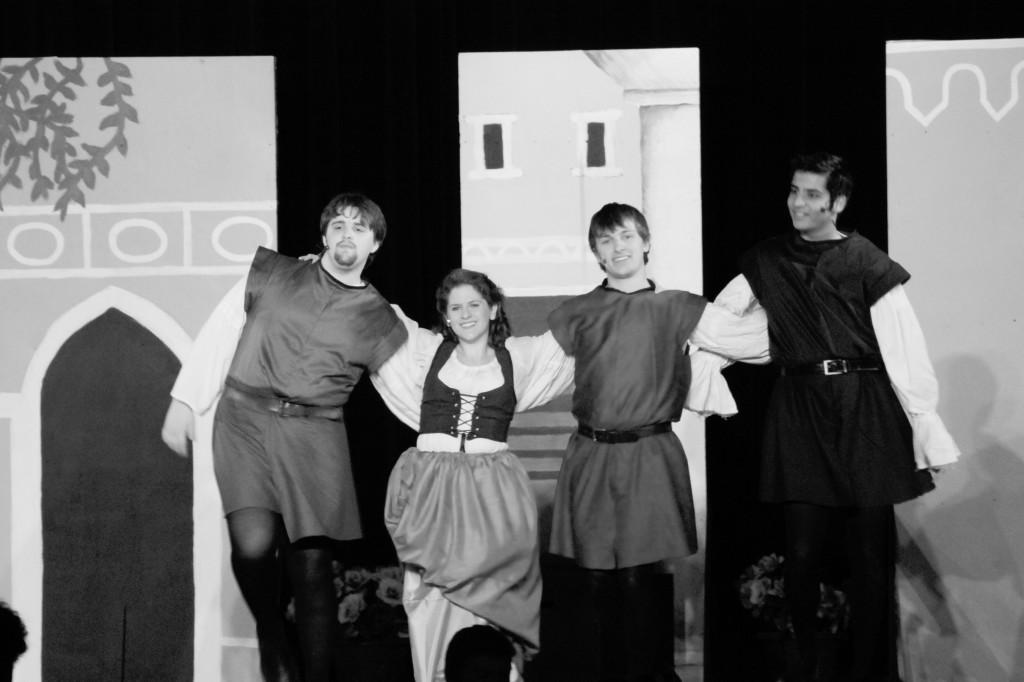 This past weekend in Thwing’s Excelsior ballroom, Case Western Reserve University’s own student musical theatre company, the Footlighters, put on a production of an old-school Broadway classic. In a dazzle of lights, music, and dancing, the group opened “Kiss Me Kate” with music and lyrics by Cole Porter and directed by CWRU student Sean Kruer. The production ran for one weekend only, with students, faculty, parents, and locals flocking to both the evening and midnight showings.

“Kiss Me Kate,” a Broadway classic, originally opened in New York City in 1948. It was penned in response to the evolution of musicals from simple song and dance routines into story-supported narratives, known as book musicals. The story, centering around a production of Shakespeare’s “The Taming of The Shrew,” deals with the actors and technicians in the production, along with the events surrounding the performance. Much of the musical’s development occurs in the play-within-a-play, with actors portraying actors who take on characters themselves, which evolves into something of a brain-bender.

Footlighters’ production, staged entirely by students, featured Beau Reddington in the dual roles of Fred and Petruchio, and Grace Elliot as Lilli and Kate. Their characters, career actors whose previous relationship ended in divorce, anchor their younger counterparts Bill and Lois, playing Lucentio and Bianca in the play-within-a-play. Tension arises between the two as Fred pursues a younger woman, Lois. Bill, played by Surya Ravindran, is a young actor with a gambling addiction and Lois’s boyfriend, herself played by Cicely Schonberg. Though much of the action swirls around the complications of these couples’ relationships, the show was bolstered by a sizable ensemble and a bevy of supporting characters, all with corresponding roles in the internal Shakespeare show.

“Kiss Me Kate” ultimately culminates in a happy ending, as the troubles developed in the first act are resolved in the second. Gangsters, involved due to Bill’s gambling, end up in the play-within-a-play in the latter part of the first act clad in Shakespearean garb. Their bumbling presence leads to several gaffes, as does the physical comedy of the rest of the cast.

The Footlighters band, led by Mathew Solomon, pumped music into the spacious ballroom, and supported the players’ spirited performance. The set, consisting of several simple flats, fit the general aesthetic of the script, as did the lighting. In style with the early Broadway nature of the script, the show featured many spotlit individual numbers, with buttons topping off powerful vocal performances by the cast. Though the microphones suffered from occasional difficulties, muddying the performance considerably, the crew coped well, and scene changes went off without a hitch.

The show’s original production won the 1948 Tony Award for Best Musical, and has since been reproduced on stages worldwide. It has been revived twice in London’s West End to worldwide acclaim, and won the Tony for Best Revival for Martin Beck Theatre’s 1999 production, with choreography by Rob Ashford. The recording of the original cast’s performance even won a Grammy in 1998.

Footlighters, established in 1998, has brought many well-known musical theatre productions to the CWRU campus, including their first semester show “Company” by Stephen Sondheim, which examines the joy and drudgery of married middle class existence. Previous productions have included “Chicago,” “Sweeney Todd,” “Beauty and the Beast,” and “West Side Story,” all of which are produced, directed, designed, and acted by students from CWRU, CIA, and CIM.