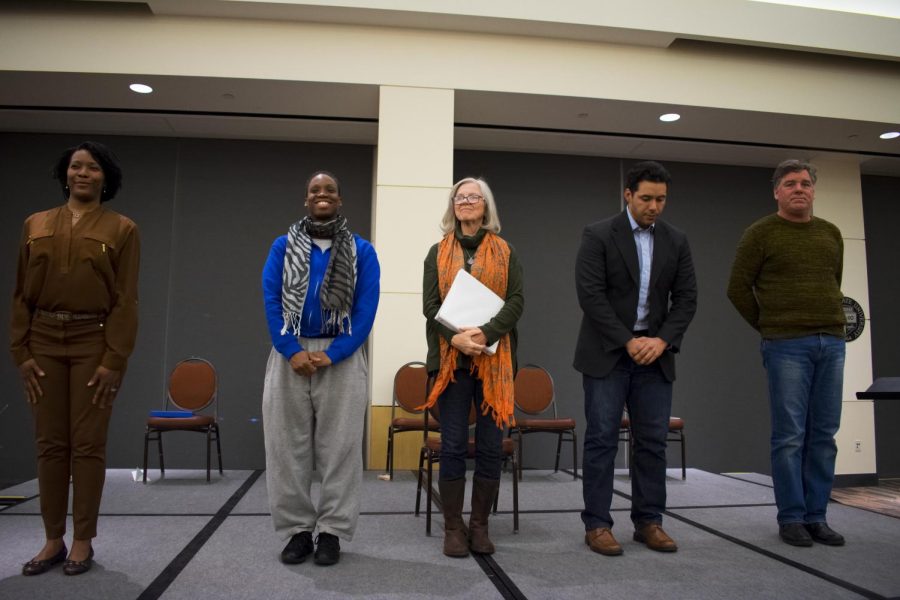 Participants of the annual Cleveland Humanities Festival (CHF) engage in a staged reading related to the festival's theme, "Health."

Health and the humanities are formally being brought together by the Cleveland Humanities Festival (CHF), a month-long series of events taking place in a city well known for healthcare and an eclectic art scene.

Jane Nord Family Professor and Director of the Baker-Nord Center for the Humanities (BNC), Peter E. Knox, coordinated the CHF to encourage the exploration of public issues from the view of the humanities. The first CHF took place in 2016, and is an annual, month-long series of themed events.

Last year, the theme was “Immigration.” This spring, the theme is “Health.”

“The study of healthcare is a vital component in the economy and culture of Cleveland and Northeast Ohio, and it is an important topic of national concern,” Knox said.

To address these concerns, from March 15 through April 2, more than 25 healthcare, educational and cultural institutions will host events centered around the theme of health for the public to attend. People can attend events all over Cleveland at institutions such as John Carroll University, the Cleveland Museum of Art, the Cleveland Clinic and Case Western Reserve University.

One of the first events on the festival’s calendar was performed by the non-profit organization Literary Cleveland (Lit Cleveland). Executive Director of Lit Cleveland Lee Chilcote believes the mission of his organization and the CHF coincide in the humanities sector.

“Our mission,” Chilcote said, “is to help nurture and create a vibrant literary arts community in Northeast Ohio.”

Lit Cleveland has partnered with the CHF by performing a series of staged readings. This year, the production was titled, “I Will Sing for You: Humanities Fest Staged Reading.”

Original work on the theme of health was crafted by fifteen Cleveland writers. The pieces were arranged in a script and performed at Cleveland State University by professional actors between March 17 and 18. Lit Cleveland is just one of the many organizations who partnered with this festival to tackle goals centered around community engagement.

Knox stated, “The goal of the CHF is to coordinate public programming by those institutions on topics of interest to the broader public.”

While there is no one source of funding for the CHF, many institutions and organizations throughout Cleveland contribute to the festival by hosting events that are both consistent with their own missions and align with the theme of the festival. The CHF is partially supported by the public grant from Cuyahoga Arts & Culture (CAC), a public agency dedicated to strengthening arts and culture in the community.

CEO and Executive Director of CAC Karen Gahl-Mills believes the CHF contributes to the Cuyahoga County community, which is why the festival has been partially supported by CAC since 2016.

“CAC connects people to arts and culture activities,” Gahl-Mills said. “In the same way, the CHF provides a great opportunity to connect to many of the vibrant museums, educational institutions and arts organizations in our community.”

Not only does the festival connect the community to arts and culture, but according to Chilcote, it “engage[s] people in the literary arts around an important topic.”

Since it takes about two years for the CHF to be planned, Knox said the topic for next year will be “Nature” and the leading candidate for 2020 is “Truth.”

“Our society needs the tools of the humanities to understand and deal with the major issues that confront us,” Knox said. “As a community we in Cleveland are uniquely blessed with the cultural resources to contribute to those important conversations.”

The CHF is one of the tools being wielded to fight the issues which face our community. The themes explored by the CHF are meant to target these issues by utilizing art and culture, two important aspects of humanity.