Humans and zombies battle on CWRU campus for fifth semester 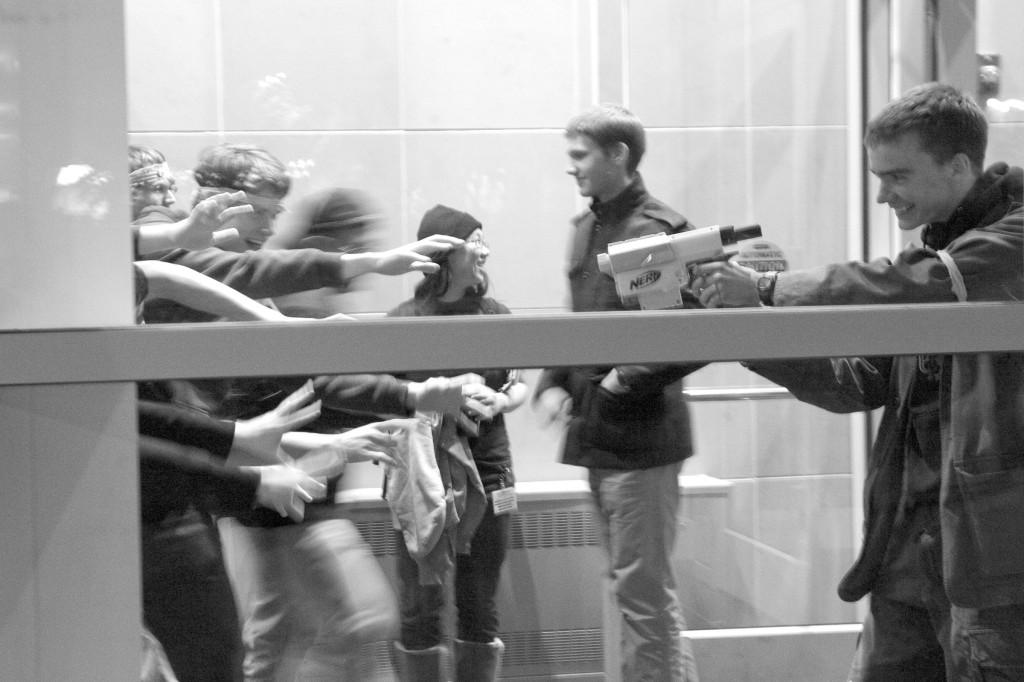 Many students spent this last weekend dressing up as werewolves, monsters, ghouls and goblins. But the zombies you’ve been seeing around campus are wearing their green headbands for a reason other than Halloween. Humans vs. Zombies has taken over campus once again, with more people this year playing than ever.

Run by junior Brady Zbikowski and a council of students who help to organize and orchestrate the game, Humans vs. Zombies is in its third year running. With approximately 300 people signed up to play this year, it’s the largest it’s ever been.

“The game has tremendous appeal for freshmen classes and then we pick up a lot of returners in years afterward,” Zbikowski explained. Most individuals being participating their freshmen year and Zbikowski hopes that next year, when every class at CWRU will have had the game available during their first year, the game will reach its maximum population.

Zbikowski began Humans vs. Zombies in the fall of his first year with fellow student Mike Saylor. The game is now in its fifth season. Zbikowski describes the point of the game is enjoy oneself, have a good time, and stay alive.

The game itself runs for 10 days and involves a myriad of rules and regulations that govern both human and zombie behavior. This year the game began on Oct. 27 and will end tonight at midnight. The playing field involves all outside areas on campus but buildings, school functions, work, etc. are off limits for playing. Most people who sign up begin as Humans, but a few token Zombies are selected to start the game among the living dead. In order to distinguish the zombies and humans, zombies wear green headbands and humans wear green armbands.

The goal for human players is simple; to remain human for as long as possible. But zombies will try to attack at every corner. Humans can attack zombies with socks or Nerf guns, but this attack only stuns them for 15 minutes (essentially long enough for the human to be able to run away). During this stunned period, the zombie is unable to attack any humans.

Zombies need to “feed” or tag a human every 48 hours in order to stay alive. When a zombie attacks a human, the zombie then takes the human’s special ID card to enter the death on the online database. The human then has one hour as a “stunned zombie” before entering the ranks of the walking dead.

Zbikowski attributes much of this year’s increased participation to extensive recruiting efforts. “We target freshmen classes with RA help and have practice events held on their quad and they really get into it. They see a couple hundred lunatics running around through the dorms with Nerf guns and just get caught up” Zbikowski said.

While many of these inexperienced players do turn into zombies early on in the game, but that does not mean the fun is over. Humans vs. Zombies participant Madeline Kraizel explained that being a zombie involves just as much strategy and action as being a human. “We’ll have [fellow] zombies who are in classes with humans text us when a human is leaving class and we’ll be there waiting for them [as they leave],” she said. “That’s one of the best parts of being a zombie,” Kraizel stated, “waiting [to attack a human].”

Today marks the final mission for all players. Every zombie rises up from the dead (even those who starved themselves out of the game earlier) for one last hurrah against the humans. The last humans must complete one final mission to survive, while “every zombie ever,” as Kraizel described, is scheming to get rid of them.

Humans vs. Zombies is catered to a variety of students, from those who have played all five seasons to those rookies with a couple of rolled up socks who just want to try it out. Some players do go all out, but many just have fun and try to survive. There’s not any right way to play this game, Zbikowski said, “You can basically play any style you want and at the end of it, I guarantee two things: You’ll have had a good time, and you’ll be thinking about how to survive longer next game.”