A day in the life of the zombie horde

Students participate in the biannual Humans vs. Zombies game 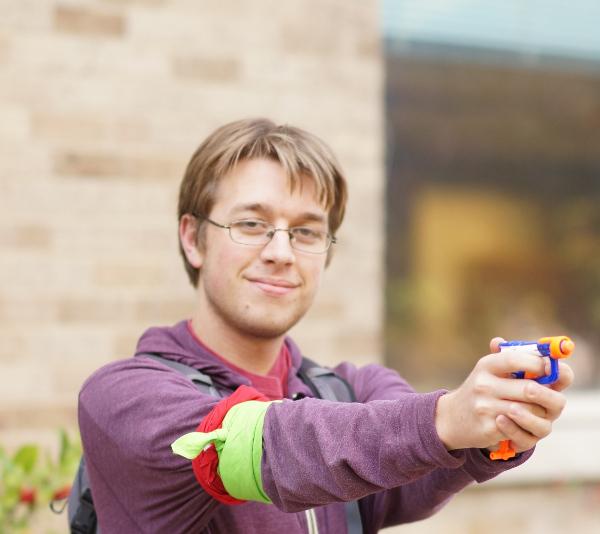 Students participate in the biannual game of Humans vs. Zombies, organized by the Big Games Club.

The zombie horde assembled at dusk. The group made a strange sight. On one end, there were the veterans: calling out for scouts, organizing squads, discussing horde tactics, and giving some last-minute advice to the new players. Many had safety pins attached to their green headbands, a status symbol that counted brains like a world war fighter ace might count downed planes under his cockpit.

On the other end were the newbies or more casual players. They danced and played kazoos and joked, clearly more concerned with having a good time than formulating sterling horde tactics. The group was made up of eight zombies, veterans and casuals alike.

They’re all part of the Big Games Club’s biannual Humans vs. Zombies game, a ten day long competitive game of extreme tag played across campus. Zombies try to tag humans, who fend them off with Nerf guns and socks.

The zombies jogged along quiet streets with hushed voices and heads down to avoid being spotted by a human. The veterans led the way, new players keeping close behind. Suddenly the leader stopped and asked the group to hold back. She spotted a few humans down the road. Upon closer inspection it turned out that the group had run into another zombie squad. False alarm, but the dusk was just turning to night and one had to squint to separate friend from foe.

The group combined with the new squad, bringing the numbers up to 14, and continued on its way. Eventually, one player received a message from the Grave Mind, a tailor-made mobile message app that allowed the zombies to communicate across campus. According to the Grave Mind, a large number of humans were holed up at the Tinkham Veale University Center. It asked for more zombies to assemble nearby in order to launch mass attack.

But the path was blocked. A single human stood at the end of the path that led to Tinkham Veale University Center (TVUC). Though outnumbered 14 to one, buildings on either side created a choke point that only four zombies could cross. With so little room to maneuver, it would be difficult for the group to swarm him. The human wouldn’t budge, and even issued a challenge by slowly walking towards the zombie group. Equipped with multiple Nerf blasters, the human had at least 20 darts at his disposal. He meant business.

If he was a good, fast shot, a squad veteran warned, he could conceivably take everyone out. The group decided to split up: half would charge right ahead and the other half would double back and attack from behind. When the flanking group made it to the TVUC, no one, human or zombie, was there.

Back down to eight zombies, the squad headed for TVUC. At least two dozen humans had assembled outside the Koch entrance of the building. They carried Nerf pistols, revolvers, blasters, rifles, virtual machine guns; altogether, an arsenal of Styrofoam anarchy. Human scouts, hidden around the building’s eccentric geometry had already spotted the group of zombies, calling out the location to the human camp.

The squad’s sole remaining veteran (the others had disappeared in the alley way) prepared the newer players for a suicidal charge. Though every zombie in the group would surely tag out, there was a good chance that they could take one or two humans with them, he explained.

“If you are not tagged out, you are doing something wrong” he said.

The zombies let out their battle cry: “What do we want? Brains!”

They charged. The zombies never really stood a chance. They ran hopelessly through a hail of Nerf darts, the humans shouting, “You’re tagged, you’re tagged” whenever they scored a hit. No success, the zombies hadn’t secured the brain a single human.

The rest of the night continued in much same way. The zombies led small, disorganized charges and failed to tag any humans. Conflicting messages from the Grave Mind only added to the confusion as amorphous zombie squads broke apart and recombined to pursue independent objectives. As the mission drew to a close, the humans became bold, leaving the safety of their firing line at TVUC to lead their own charges against scattered zombie squads. Idiomatically, the hunters became the hunted.

A little after eight o’clock, the mission ended. The zombies lost, though the eight-zombie squad scored a few lucky tags in a last ditch charge. In the mission debriefing, discussions of tactics and grand strategies abounded: if the squads were larger, if the squads were smaller, if there were more scouts… most seemed to agree on a decisive human victory. But the game was not over. Better luck next time, zombie horde.