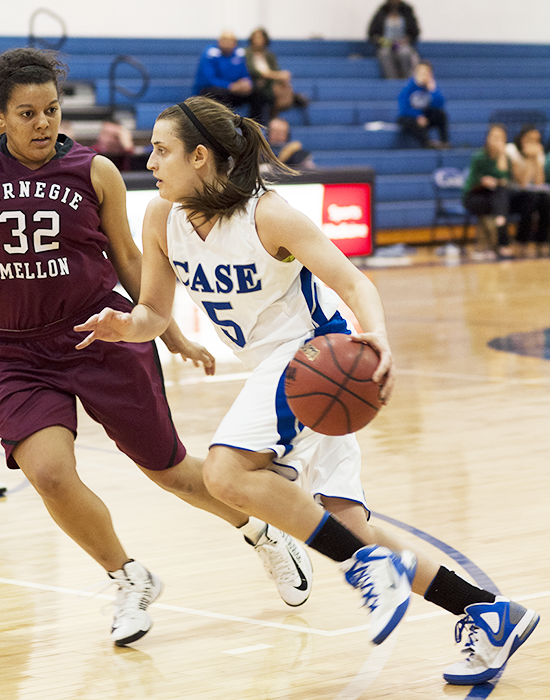 Senior Evy Iacono was selected to play in the Jump25.com All-Star Classic this past week. Iacono was the UAA Most Valuable Player and was named an All-American this season.

Jump25.com has released the rosters for the 2013 All-Star Classic, which will be played Sunday, Apr. 14, inside Alumni Hall Gymnasium on the campus of Ohio Dominican University. Among those named to the roster was Case Western Reserve University senior All-American guard Evy Iacono.

The women’s all-star game, scheduled to tip-off around 1:30 p.m., will feature the top student-athletes from Ohio in all three NCAA divisions as well as the NAIA. The women’s game is the second in a quartet of contests including a men’s collegiate all-star game as well as high school boys’ and girls’ games.

Iacono was recently named the second All-American in program history by D3Hoops.com.

Piling up the postseason accolades following a successful career on the hardwood, Iacono is also just the second CWRU women’s basketball student-athlete to be named University Athletic Association Player of the Year.

In 2012-13, Iacono led the UAA in scoring at 17.9 points per game, and she posted the second-highest single-season scoring total (447 points) in school history. A four-time UAA Player of the Week this winter, Iacono joined the program’s 1000-point club in late November and twice set the school single-game scoring record with respective totals of 37 and 38 points. Overall, she scored in double figures in 21-of-25 games and averaged 4.7 rebounds, 4.0 assists, and 2.4 steals.

Earlier this season, Iacono was lauded for her efforts both on the floor and in the classroom with Capital One Academic First Team All-District VII honors.

The Spartans ended the season at 16-9 overall and in fourth place in the ultra-competitive UAA (8-6). The 16 victories are the most for the program since the 2001-02 season when the team was 20-9 overall and advanced to the NCAA Tournament. In six years under Head Coach Jennifer Reimer, the Spartans now have produced five winning campaigns.