IMPROVment: A unique organization for a fun experience 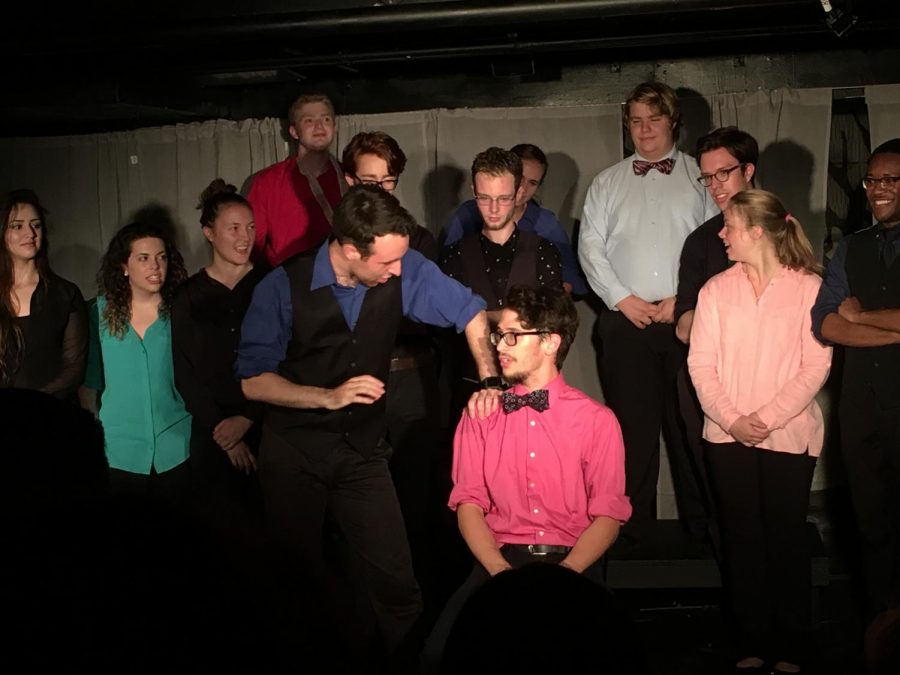 IMPROVment performs at their weekly shows in the Eldred Black Box Theater.

Jan. 20 marked the first of many IMPROVment shows that will be put on throughout this semester at Eldred Black Box. IMPROVment is the only short form improv comedy troupe on campus and its shows are free and open to the public.

Although IMPROVment is a theater organization, auditions are open to anyone who wants to try out and members of the troupe range from engineering to humanities to nursing majors. Andy Ogrinc, a second-year chemical engineering major on the troupe, auditioned only because other members of his Orientation group were going. Ogrinc likes to say that he “accidentally got onto the troupe.”

IMPROVment also attracts pianists, as they have piano accompanying several of their games. Last semester, second-year Jackson Routhier jumped on the opportunity to audition when IMPROVment was looking for new pianists. In addition to providing music for the troupe, Routhier provides a non-actor perspective, which he believes is useful for the actors.

Being a pianist for the troupe is actually pretty similar to what the actors do, according to Routhier.

“We’re performers, just like the actors, but we don’t create and control characters that talk to one another or perform actions,” he said. “We play the piano, which is its own character. He can change moods, support other characters, and push the actors in different directions.”

When the actors were asked what they bring to the troupe, there were a variety of responses. Alex Gordon, a third-year student, felt he brings “nerdiness” to the troupe. John Paul Peralta, a fellow third-year student, said “bad ideas and someone to make fun of” and “facial hair.” Somewhat more seriously, Ogrinc responded, “Well aside from obvious good looks, I like to think that I can sometimes have a rather dry sense of humor which can play off some of our more outrageous actors.”

All in all, the troupe spends about eight hours a week practicing together, but everyone contributes time outside of that to keep things running smoothly. Ogrinc is the public relations chair of IMPROVment and enjoys creating advertisements for their shows on Photoshop.

Olivia Taliaferro, a fifth-year, is the president of IMPROVment. Taliaferro runs business meetings, takes care of administrative duties, communicates with outside groups and plans special events.

One of the special event she plans is the Lake Effect Improv Festival. The event features both college and professional short and long form improv comedy troupes from around the region and will be held on April 7 at 7 p.m. Like the rest of IMPROVment’s shows, it is free and open to the public.

At the end of the day, IMPROVment aims to make students laugh. Their shows are a great way to de-stress at the end of the week. The troupe offers a unique experience through both the improvisation and interaction with the audience. If you’re looking for a laugh, head to the Black Box at Eldred on Saturday nights at 9 p.m.