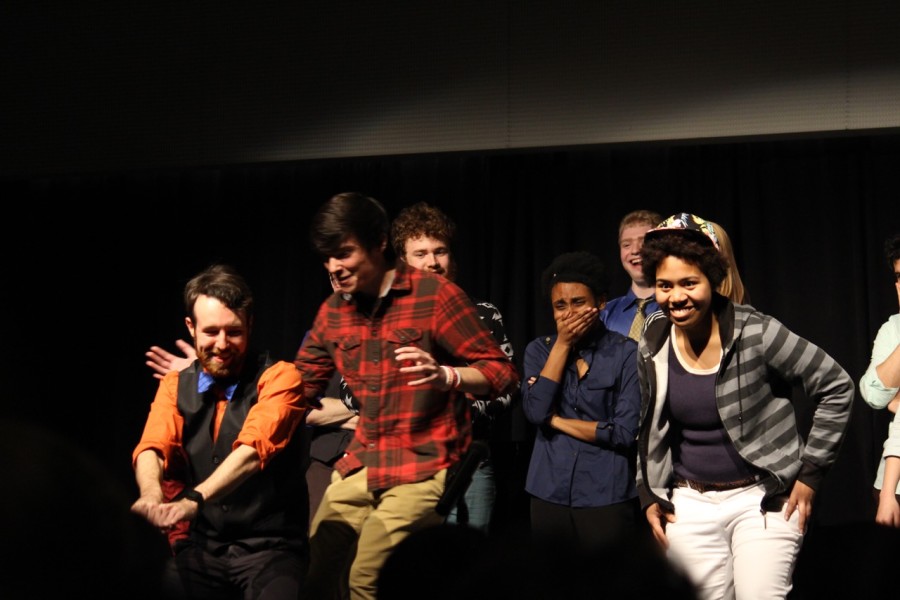 Improvment's Lake Effect event brought togehter local improv comedy groups from around the state of Ohio to perform in a day of laugh-filled performances.

IMPROVment brought the laughs to the Tinkham Veale University Center Ballroom on Saturday, March 28, with their fourth annual Lake Effect improv show, which brought Case Western Reserve University’s team together with two teams from Ohio State University and one from Bowling Green State University for a night full of fun.

The 250 attendees were welcomed in by the upbeat pop hits of Taylor Swift. The event was free for all, including a Bon Appétit-catered intermission, and the ballroom was practically filled.

The night started with Ohio State’s Fishbowl Improv, who did a long set that had the audiences in stitches. Highlights included an art teacher facing the harsh reality of his divorce through his students and a dramatic love story between two second-grade drawing partners split by one’s promotion up to the third grade.

The bit escalated quickly, when the girl (played hilariously by one of the team’s largest men) witnessed her two love interests fight in a dramatic drawing contest, a 48 pack of Crayola crayons acting as their weapon. Of course granny smith apple had to be taken out, because, “We both know if you have granny smith it’s basically cheating. Street rules.”

The next team, the Plastic Shatners from Bowling Green State University, were not as funny as Fishbowl, but they were still good. Their set involved quicker improv games, including a singing game, which, while funny, was difficult to hear at times.

The third team of the night, 8th Floor Improv, was also from Ohio State. Their set was long form and much more connected than Fishbowl Improv’s— all of the bits started to come together and the elements bled over into each other in a very funny way. Ranging from aliens doing Madonna’s “Vogue” dance, to kids wanting to surf on top of a school bus, to an 87 on a test coming back to haunt someone in a job interview (a fear of CWRU students everywhere), their set had something for everyone.

IMPROVment was up last, playing a few shorter improv games that showcased the humor that they bring to campus at their weekly shows. Sophomore Stephen Kolison brought some of the best lines of the night: “Pretty people get what they want. And people who aren’t pretty have to try hard and become engineers,” and “This is Harriet, she’s my frenema. It’s like a friend who helps you pee,” were just a couple of examples from some really great stuff.

Another bit that also really stood out was an improvised fairy tale about a girl forced to live with smelly hands, which really showcased the team’s talent for physical comedy.

The show ended with a massive game of Freeze, played with all of the teams. Even though there were too many people to fit on the stage, it was nice to see the game expand to include more and more people from all of the schools.

Although one of the teams scheduled to perform, Kid Business from Oberlin College, couldn’t make it, their absence wasn’t hard-felt. The show went on for the perfect length of time, and the teams really came together in a great way.

I left the show with sore abdominals and an endorphin rush that lasted all the way through the late night Denny’s run and “The Even Stevens Movie” screening that rounded out my night (because, you know, Saturday night). If you’re interested in seeing IMPROVment in action, they have free shows every Saturday night in the Eldred Black Box theater, including a special April Fool’s show on April 4 at 9 p.m., where they will be playing a set of brand new and rarely played improv games.