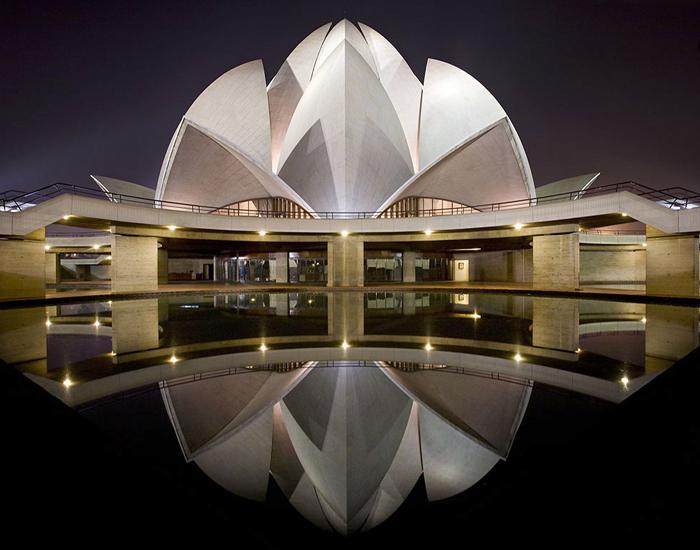 The weird and the fascinating features of our world expand into so many fields around us. Science is but one subject that celebrates its oddities; architecture is yet another. Today’s journey will take us to a warm nation on the other side of the globe, famous for its beautiful Taj Mahal and revolutionary leaders such as Mahatma Ghandi.

The structure accompanying this article is known as the Lotus Temple, masterminded and brought to life through the efforts of the architect Fariborz Sahba in the late 1970s. The building itself is composed of 27 free-standing marble clad “petals” arranged in clusters of three to form nine sides. The high quality marble was imported from Greece. Its highest point stretches a bit taller than 40 meters. Surrounding it are more than 9 ponds and gardens. Once inside the building, looking up reveals an intricate flower-like glass setting.

In 1987, the architect of the Bahá’í House of Worship was presented with the award for excellence in religious art and architecture by the Institution of Structural Engineers. They noted how well it “emulates the beauty of a flower and how striking its visual impact (was).”

The structure itself is actually used as a Bahá’í House of Worship. This religion is similar to universalistic philosophies in that proponents believe all religions have their own value, and the idea of a higher being is respected. They do have their own prophet and teachings; however, they are very tolerant of various religions. Some Hindu, Muslim, and other religious entities have used the building as a house of prayer or to celebrate festivities.

The overall unique look to the building is what it makes it so bizarre to me. I’ve never seen a building that looks like a beautiful flower. Plus, the Lotus Temple in New Delhi is relatively close to the Taj Mahal in Agra. When you make your world tour and stop in India, don’t forget to also explore the Lotus Temple. Ralph Waldo Emerson once said, “The love of beauty is taste. The creation of beauty is art.” The beauty of architecture is all around the world, and sometimes the most unknown pieces of it are hidden amongst the more popular gems. The Taj Mahal is a breathtaking sight, but that region of India has so much more to explore.