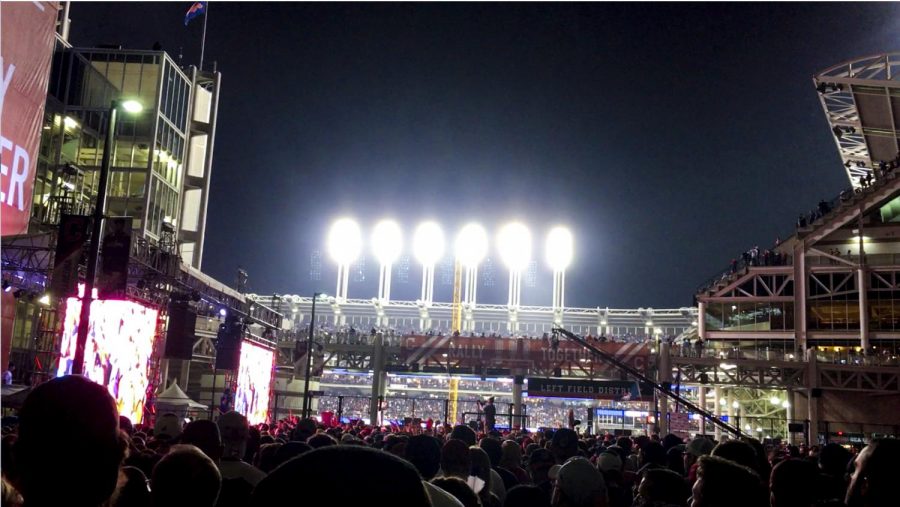 Following a magical playoff run a year ago, the Cleveland Indians were upset by the New York Yankees in the first round of the playoffs this season.

For the second consecutive season, the Cleveland Indians lost three consecutive potential series-clinching games and were eliminated from the playoffs. Last season, after going up three games to one on the Chicago Cubs in the World Series, the Indians could not secure another victory. This year, defeat came much earlier in the postseason, as Cleveland fell three games to two to the New York Yankees in the American League Division Series (ALDS) after taking a 2-0 series lead.

Perhaps Indians fans knew something before the series started, as third-year student Nick Bean who attended Game 1 described the park as “filled with nervous excitement” before the first inning.

Despite that feeling, the series started well for the Indians. A commanding performance in Game 1 by starting pitcher Trevor Bauer resulted in a 4-0 shutout win. The Yankees’ bats looked overmatched by Bauer’s curveball and, despite just one game in the books, the series looked to be an easy win for the Indians.

Game 2 was one of the best of this year’s playoffs, as the Indians won 9-8 in 13 innings, the longest postseason game in franchise history. After an uncharacteristic bad start from Corey Kluber, the Indians found themselves down 8-3 in the sixth inning against the best bullpen in baseball. Shortstop Francisco Lindor hit a grand slam, his only hit in the series, to drop the deficit to one, and outfielder Jay Bruce tied the game in the eighth inning with a solo home run. Catcher Yan Gomes hit the game-winning single in the bottom of the 13th to finally end the five hour, eight minute affair.

Even native New Yorkers, like fourth-year student Sayde Slobodien, were swept up in the excitement.

“I found myself cheering more and more for the Indians and every time they scored I was yelling just as loud than all the people around me,” she said over text about her experience at Game 1.

With a two game lead and the energy from a come-from-behind, extra-inning victory, the Indians had all of the momentum as the series shifted to New York City. A brilliant pitching duel in Game 3 saw the Indians as hard luck losers. Masahiro Tanaka made the Indians look silly with his dazzling splitter and the Yankees bullpen finished a 1-0 shutout. Indians starter Carlos Carrasco gave up no runs in almost six innings, but a Greg Bird solo home run off of Andrew Miller in the seventh inning proved to be the difference.

The Indians played sloppy baseball in Game 4, resulting in a 7-3 defeat. The team committed four errors and all but one of the Yankee runs were unearned.

“My emotions have been on a roller coaster ride during this series,” said Bean over email after Game 4. “The two games in New York definitely were more stressful to watch than the two games in Cleveland.”

The start of Game 5 started inauspiciously for the Indians, as Kluber gave up a home run in the first inning to Didi Gregorius. He hit another and drove in three of the five Yankee runs. Brett Gardner drove in two with a single in the ninth to put the game away, as the Indians committed three more errors in the game. Sabathia and the bullpen limited the offense to two runs on just five hits, and the Indians lost 5-2.

The Indians simply could not score runs in the series. The team batted .171 and averaged 3.6 runs per game. An injury to slugger Edwin Encarnacion in the first inning of Game 2 kept him out of the following two games and outfielders Michael Brantley and Lonnie Chisenhall were not 100 percent healthy. However, that doesn’t excuse Lindor or team MVP Jose Ramirez from collecting just four hits between them.

For Indians fans, the defeat brings sadness and disappointment. Both the team and fans, including Bean and Slobodien, felt the Indians should have taken the series and advanced all the way back to the World Series. The team that won the most games in the AL and set the record for longest winning streak was supposed to avenge last season’s loss to the Cubs and end a 68-year title drought.

That’s not what happened at all. The juggernaut lost to the underdog and, for the second consecutive season, Indians players watched as another team celebrated on their home field. Sometimes the favorite doesn’t pull it out. Sometimes your pitchers have their worst starts of the season in the postseason. Sometimes a team of destiny fails to fulfill it. Such is baseball, and such is life.