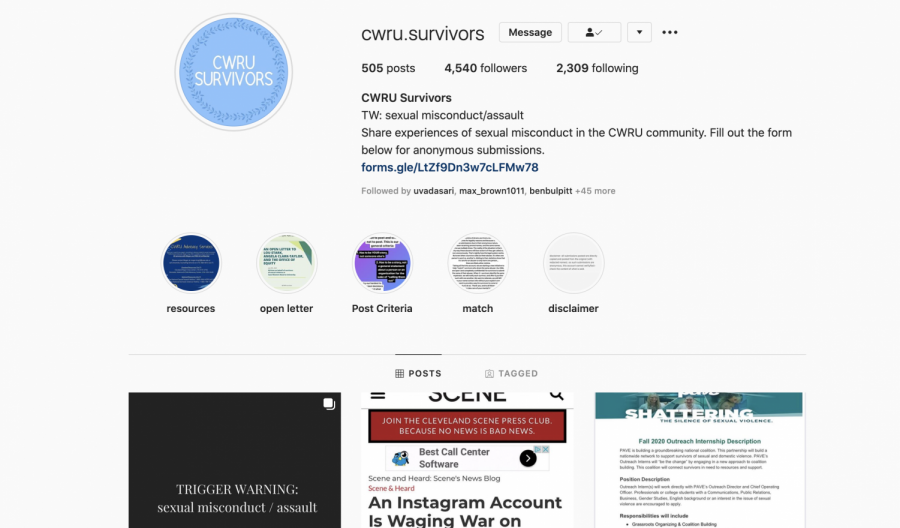 “@cwru.survivors” is an Instagram page dedicated to sharing stories of sexual misconduct at Case Western Reserve University. Since its first post on July 4, the account has posted over 400 stories. Those who want to share their story fill out an anonymous Google Form linked in the bio of the account. From stories about fraternity gang rape to incidents with faculty members, each one reveals a world of trauma, despair and strength that survivors of sexual misconduct must navigate on their own.

The administrators of @cwru.survivors, who wish to stay anonymous, describe the page as being the result of a “perfect storm” of the circumstances that culminated in its founding. They dispute the idea that CWRU has a reputation of not being like other schools, stating that this narrative is harmful, as administrators choose to believe this and therefore think that fundamental changes in the system are not necessary.

Since the start of @cwru.survivors, students are feeling more unsafe than ever. Second-year student Snigdha Chawla believed that CWRU protected its students: “I was living in the naive utopia that I would always be protected by my university.”

Now, she realizes how wrong she was.

After reading numerous stories on the Instagram page, Travis Dumas, another second-year student, felt that CWRU was: “more concerned with sweeping cases under the rug, rather than finding the truth.” Even as investigations from various fraternity and sorority chapters are underway, he feels that, “there seems to be a common theme of the university saying that it is difficult to target members of Greek Life.”

The administrators of @cwru.survivors fear that the Greek Life internal investigations will not change much. They pointed out that the word “investigation” can be vague.

“What does investigation actually mean?” questioned one of the administrators. Furthermore, they fear that this approach may perpetuate the present lack of accountability, as some Greek Life members may be hesitant to report another’s actions.

Chawla and Dumas were also both disappointed in the prevalence of sexual misconduct in Greek Life. In a post from July 8, the @cwru.survivors claimed that they had received 132 allegations that referenced fraternities, and that figure has only grown since. Other posts since then have also referenced sororities, as well. For Chawla, the many stories of sorority or fraternity-related sexual misconduct indicate rape culture’s prevalence within Greek Life on CWRU campus. As a first-year student, upperclassmen warned her and others about which fraternity houses to avoid due to the high frequency of sexual violence that occured there.

“We need to stop normalizing all this,” remarked Chawla.

In addition to outrage over the flood of allegations against Greek Life, the administrators of the Instagram account are also concerned by how little action the university originally took, stating that CWRU had not done enough to address sexual assault in the past.

Since then, CWRU has implemented new Title IX regulations. In an email to the student body on August 12, the CWRU general counsel stated that “the regulations stipulate that complaints of sexual assault reported to have happened off campus fall outside Title IX’s purview, which in our case means that the Office of Equity cannot pursue the matter under Title IX.”

Even if the student knew of the office’s existence, the administrators acknowledge that some are hesitant to report their situation, especially if the perpetrators are members of Greek Life.

Those who actually went through with the process of reporting faced many challenges. For example, one story on the page reads: “My [Title IX] advisor put such a strong emphasis on the attacker’s emotions and well-being.”

Yageen Hassan, a junior at CWRU, has noted that the Title IX office has its shortcomings. She notes: “[Survivors] can get victim-blamed further, questions for honestly irrelevant things like their past sexual experience and get belittled and told that ‘it’s a difficult case,’ making the experience harder and discouraging survivors from taking the issue further and getting the justice they deserve.”

“There was a problem going on, and we wanted to bring awareness to that problem,” asserted one of the administrators.