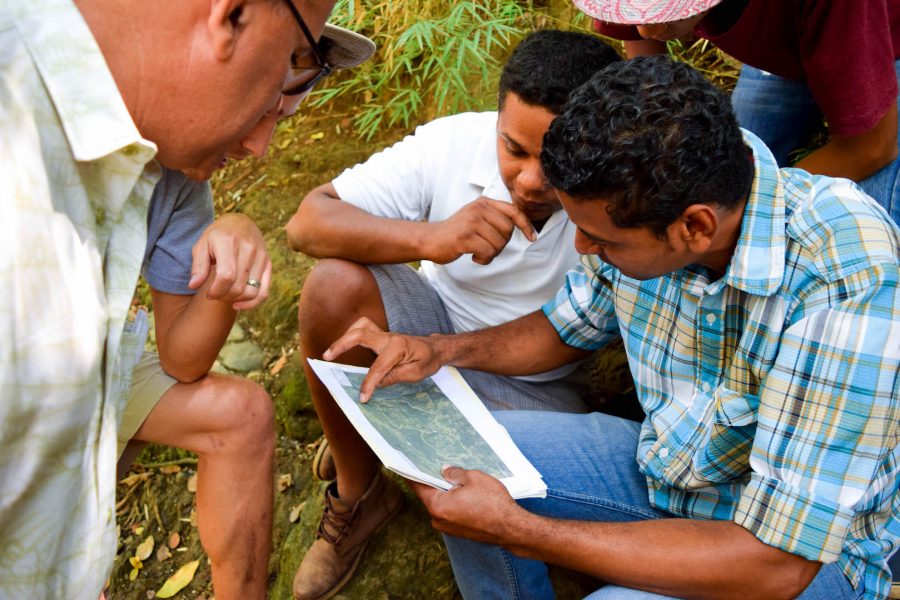 Second-year student Neil Chavan spent his winter break in Costa Rica. During the trip, he and his team members assessed the water condition in a Costa Rican community and are now aiming to provide a plan for a sustainable water supply in the near future.

For many students the three weeks without classes between semesters is a time to take things easy at home, but for two, it involved adventures in different parts of the world.

Second-year chemical engineering major Neil Chavan spent five days in Costa Rica, leading a project with the Humanitarian Design Corps (HDC) to study the water challenges faced by the rural neighborhood of Las Pilas. He, along with four classmates and two professors, stayed with host families in the neighborhood and worked with local water utility leaders.

HDC works with Engineers without Borders to provide alternative break trips. Prior to the trip, Chavan and the others had done research on the water condition in Las Pilas. The groups have also been working closely with Restoring our Watershed, a U.S.-based nonprofit organization that works exclusively to protect the watershed that encompasses the neighborhood.

“Usually during my winter breaks I’ve kind of just gone on vacation,” said Chavan. “I wasn’t really doing anything school related. But this winter break, because I was focusing on the school project, I did feel like I was being very productive—like I was contributing to something and furthering my education in that way.”

The trip took an unexpected turn before the group left the United States: A professor from the Spanish department who was going to act as a translator was unable to join them. However, the group was surprised by how much they were still able to accomplish with the language barrier.

“The fact that we were able to do so much even though we [didn’t] have our translator with us was … a really proud moment for us,” said Chavan with a smile.

The relationship Chavan and his team members established with local people also made the trip memorable.

“It was just really really amazing how we were able to build that kind of relationship in just five days,” said Chavan. “It was very impressive how this relationship can be formed in such a short period of time.”

Ultimately the group found that the piping from the neighborhood’s well to a holding tank was not sufficient. In homes, they found elevated levels of coliform bacteria, indicating that the water was contaminated with feces or sewage, and that more harmful pathogens might be present. According to Chavan, the region he visited was one of the poorer counties, and the Costa Rican government sometimes ignores its needs—specifically for better water supplies. The group, working with Restoring our Watershed, aims to develop a sustainable plan for the neighborhood.

“This is a community that is near the Pacific coast of Costa Rica,” said Chavan. “It has really been impacted by climate change and rising temperature. That has really affected their access to water.”

Schimelman spent his summer break doing a research program in Singapore and bonded with the students he lived with to the point where one student from France invited the group to spend time at her house. Nine of the students ended up going on the two-week trip, during which they visited Paris and other parts of France. During New Year’s Eve, the group opted out of going into the crowded areas but decided to tour around Paris and hung out in their hotel to spend the night.

To Schimelman, this New Year’s Eve was very different than the others. “[Spending New Year’s Eve] with family is always nice but usually more low key,” said Schimelman. He thought it necessary to “take those time to really reconnect with friends because it is hard to keep ties with everyone.”

When evaluating the friendships he was able to form during the summer in Singapore, Schimelman felt very fortunate to have friends from all over the world.

“Most people didn’t know each other beforehand,” said Schimelman. “Everyone comes from their own respective countries. Besides myself, everyone’s second language is English. Some of them … are just very open and willing to learn from everyone else and just get close.”

When Schimelman and his friends left Singapore, they were not sure if they would ever see each other again. A reunion trip seemed to Schimelman at that point “up in the air.” That they were able to do it is “comforting” to him.

Schimelman also recognized that the studying abroad experience in Singapore has been very rewarding to him.

“The opportunity is worth it,” said Schimelman. “You definitely realize that even though there are cultural differences in different places in the world, every day life is very similar, people are similar.”
Schimelman took many photos during the trip and one of them is selected as one of the winners of The Observer’s winter break photo competition. He and his friends hope to meet up in different parts of the world in the future.