The opening reception of “A California Childhood” 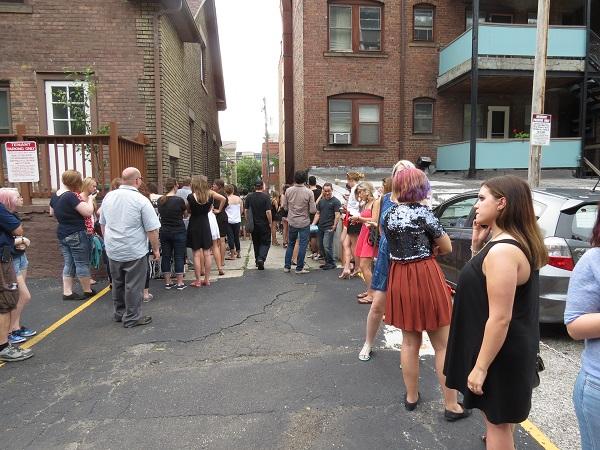 At the opening night reception of "A California Childhood," the long line wrapped all the way around the parking lot at the Verne Gallery.

“Have you ever seen this many people lined up for the sake of art?” I asked my friends as we stood lined up outside the Verne gallery, a usually quiet little gallery dedicated to showing Japanese prints on the fringes of Cleveland’s Little Italy.

We were standing in a line that  not only dominated Murray Hill Rd., the street the gallery stood on, but even wrapped around the entire back parking lot and continued down the street.

“Yeah, right,” my friend replied, “they’re here to see James and Thomas Franco, not the art.”

Although a firm belief in the visual qualities of the art—rather than the identity and status of the artist—should be able to draw in such a crowd, it was undeniable that the presence of the Franco brothers in this humble corner of Cleveland contributed vastly to the swarming crowds. Before I could even get into the small gallery, I waited in line for two and a half hours.

The art show inside was slightly disappointing, as the Franco brothers left after the first hour, and those who were lucky enough to be corralled into the gallery were limited to 15 minutes at most inside. The works, while polarizing, were disappointingly stamped with price tags, something which I believe could have been left off until after the opening reception, so viewers could have seen the entirety of the collection of paintings, sketches and sculpture. The show was also underwhelming, as there was not much to see, and the pieces there did little to capture my interest, as one could see similar objects at any contemporary art museum.

Although my experience was more negative than positive, the show still raises some interesting questions about the contemporary art world. In the contemporary art world, it is almost too easy to see artists aligning themselves with celebrities, such as Jeff Koons’ and Lady Gaga’s collaboration on ARTPOP, and celebrity artists with anonymous social activist artists such as Banksy. Even though the identity of Banksy remains a mystery, his graffiti art is considered valuable enough to sell for millions of dollars, whereas the Franco brothers are selling their paintings for $7,000 apiece.

The difference is that Banksy is not actively driving up the prices of his works. Usually, when he does sell art, it is in the disguise of a street vendor, and the prices are within reason for an everyday consumer. For $7,000 at the Verne gallery, one can buy an artwork by James or Thomas Franco. However, most of the value of the artwork comes not from the quality or meaning, but from who painted it.

In addition, although this art show was meant to promote the Verne gallery, how many of those at the opening reception will return to the Verne gallery or even remember the gallery’s name?  The Verne gallery is a quiet gallery owned by Franco’s maternal grandparents, thus the choice of venue. Although I’m sure many appreciate the gallery’s mission to collect and display Japanese prints, I fully expect the gallery to go back to the quiet place it was before the Franco show.

All in all, is the show a good way to kill a few minutes while walking down Murray Hill? Yes, I encourage you stop by. Was the show worth waiting in line for two hours in the muggy Cleveland summer? No way, could have gone to MOCA instead—at least they have air conditioning.