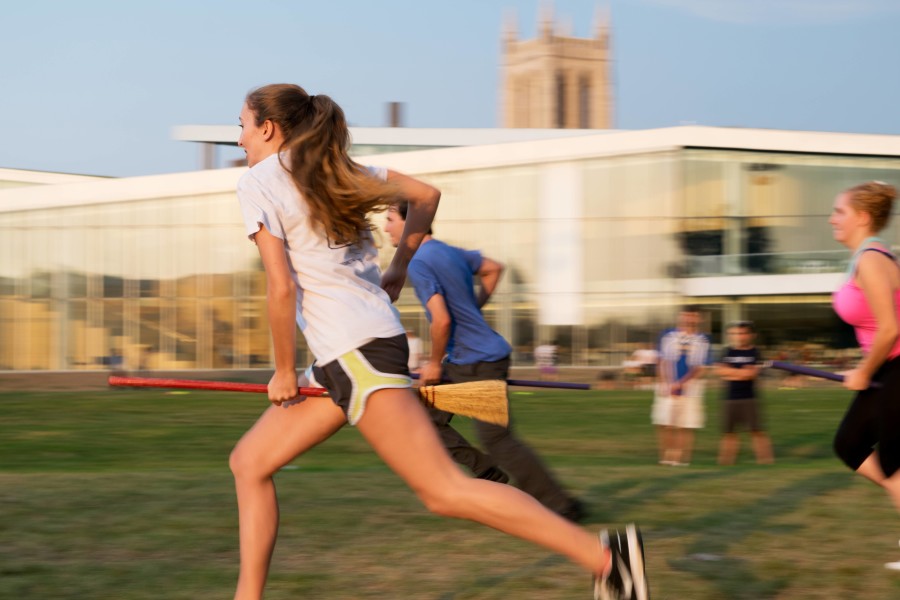 Two Cwrucio members sprint for the quaffle and bludgers at the center line. The experience of playing Quidditch erases any doubt of the game being considered as a sport.

With a saga as lengthy and exciting as the books that the activity is based on, the question of Quidditch’s place in the sports world has long been a topic of debate among the staff of this newspaper.

The staff decided that the only way to bring the arguments to an end was for me, the sports editor, to play Quidditch and see if it truly deserves the title of sport. This is the story of that experience.

I am stingy in what I define as a sport and what I don’t. The term “sport” is difficult to define because so many different games and activities now have dedicated followings and organized competition.

I believe a sport must have three things to qualify for the title: It must be an athletic physical activity, it must be a competition between two or more individuals and the way the sport is completed must be dictated by a national or international governing body. This allows for all players of the sport to have an official set of rules to follow.

The first key to determining whether or not Quidditch is a sport is the question of athletic competition. This is where I come in.

I was given the opportunity to try my hand at Quidditch by Cwrucio, the Quidditch team here at Case Western Reserve University. At the far end of Freiberger Field, a group of 24 students gathered in a circle, completing their pre-practice stretches and treating the upcoming practice the same way any athlete would. They definitely treat it like a sport, I thought, as I joined the circle; perhaps I didn’t know what I had gotten myself into.

After this I was given the customary introduction to Quidditch by sophomore Chris Gittings. Played on a flying broomstick in the air (sort of), the game consists of seven players in four positions—a keeper, two beaters, three chasers and a seeker.

The teams play with four balls of different sizes. The quaffle is passed between the chasers and thrown into the three rings that compose the goals, which the team’s keeper must attempt to defend. The beaters attempt to disrupt play with the two bludgers that they aim at the opposing players. Finally, the seekers attempt to find the elusive and fast snitch, ending the game and adding 150 points to their team’s score.

These basics translate to the “muggle” version of the game, where the quaffle is replaced by a volleyball, the bludgers by three dodgeballs and the snitch by a human who the seekers must chase down, and when they do the game is over, but with only 30 points added on for the successful capture.

The resulting game, a crossover between dodgeball and rugby, has spread like wildfire amongst players since being adapted for real life by Xander Manshel and Alex Benepe at Middlebury College in Vermont back in 2005.

Despite the necessity of playing the game on foot, players still simulate flying brooms by tucking sticks between their legs as they run.

“Some teams are made of all super athletics players,” Gittings said to me as I grabbed a broom. “As a result, some schools have moved toward treating it like a sport without the Harry Potter background. They use only sticks instead of brooms. It’s kind of sad that they want it to just be rugby.”

The practice I attended was focused on beating. I learned quite quickly that it is extremely difficult to keep your eyes on all of the bludgers. The beating drills that comprised the first part of practice saw me hit by an opposing player and knocked off my broom within the first minute of each and every drill we played.

I developed different strategies in my head each time while crouched with my broom touching the ground, awaiting the “Brooms Up!” call from the referee. Each strategy was as unsuccessful as the last.

“Remember the people starting next to you are not on the same team as you,” said Tasha Smith, who was running the drills. The result was terrifying.

One round, I reached the centerline first, grabbed a bludger and prepared to fire at a target, only to realize that I had already been hit in the back by another player. I was forced to dismount my broom and slink to the sidelines. Perhaps there was more strategy to this game than I thought.

By the time I was happy with my progress in dodging and throwing bludgers, we had added chasers into the equation. The need to not only focus on the brightly colored dodgeballs whizzing past my head but also the location of the Quaffle made for a very discombobulating situation. All this, in addition to the unnatural style of running around with a broom between my legs, made for a steep learning curve.

Finally, with the daylight starting to fade, the practice wrapped up with a scrimmage. All of my training, while highly limited, came into play. Playing as a chaser for the scrimmage, I found myself highly focused on the quaffle, only remembering the bludger when I was once again hit in the back less than a minute after the “brooms up” call.

Being in the offensive half of the hockey rink-sized field forced me to dismount and sprint back to my team’s goal posts, at which point I could return to the action.

As the first one hit by a bludger thus far in the match, I couldn’t help but feeling like I’d screwed up. However, once I saw that the entire team was at one point or another sent sprinting back to their goalposts, I stopped worrying and just got truly into the game.

Keeping the broom between my legs proved to be more of a challenge than I thought. My natural running gait, with both arms driving backwards, pulled the broom outside of my legs on multiple occasions.

By the time the game was over, I was out of breath, exhausted and still a little lost, but I could no longer deny the true physical activity that Quidditch requires. The skills all have for a steep learning curve, but make for an exciting and enjoyable game.

The other two caveats to my definition resulted in my previous dismissal of this fictionally inspired activity as a sport. Since Quidditch is a team activity, it fits the second part of my definition quite easily.

The Quidditch players on this campus and all who play the game consider themselves athletes, and rightly so. As I discovered, the game they play is both extremely competitive and extremely physical. To my surprise, there is in fact a governing body for the sport and an international set of rules for the sport inspired by one of the most popular book series of all time. Quidditch fits the definition.

I no longer have a choice: Quidditch is definitely a sport, and a fun one at that.