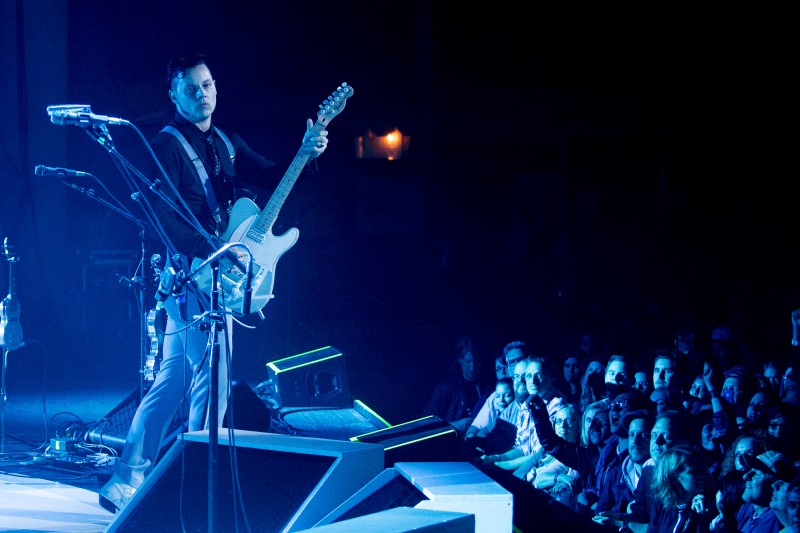 Jack White produced a captivating performance at his show at Nautica Pavilion, where his stage was completely washed in a blue light

Some months ago, “Rolling Stone” magazine ran a headline describing Jack White as rock and roll’s own Willy Wonka. From the vast variety of music styles and guitar wizardry that White displayed during his show at Jacobs Pavilion on Sept. 15, not even that description does him justice.

Under a stage bathed entirely in blue light, Jack White and his band of five treated a nearly sold-out Cleveland crowd to two hours of music from the Dead Weather, the White Stripes and White’s own solo material. A thundering rendition of the instrumental “High Ball Stepper” threatened to bring the house down from the very start of the show. “Lazaretto” and “Hotel Yorba” followed, until White suddenly stopped the band and said, “Sorry, that’s all the time we have,” before launching into an untitled jam that incorporated a dizzying blend of surf guitar, garage rock and roots music.

Jack White’s quick stage banter was a highlight of the night’s festivities. “Forget looking for authenticity,” White said, “I myself once walked into a Wal-Mart store!”

If authenticity was lacking in performance, the spontaneity of the setlist and originally of the song arrangements made up for that in spades. After nearly every song, White turned individually to each of his band members to whisper the title of whatever was up next, which could end up either being a piano-led romper of the White Stripes classic “Dead Leaves and the Dirty Ground” or a blistering medley of “Sixteen Saltines” and Beck’s “Devil’s Haircut.”

After a 15 song set, White and company left before returning for a seven song encore that lasted for nearly 40 minutes, including “Hello Operator,” “Ball and Biscuit” and “Catch Hell Blues.” Ending the evening with a crowd-sung version of “Seven Nation Army,” Jack White’s spellbinding ability to create and emote was clear as the frenzied crowd chanted the song’s melody.

Seeing Jack White perform live is like seeing a profession athlete play at the top of his game. There is a resounding joy that comes from watching a true artist work his magic, and the Cleveland audience certainly felt that Monday night.