Jam out with CWRU softball 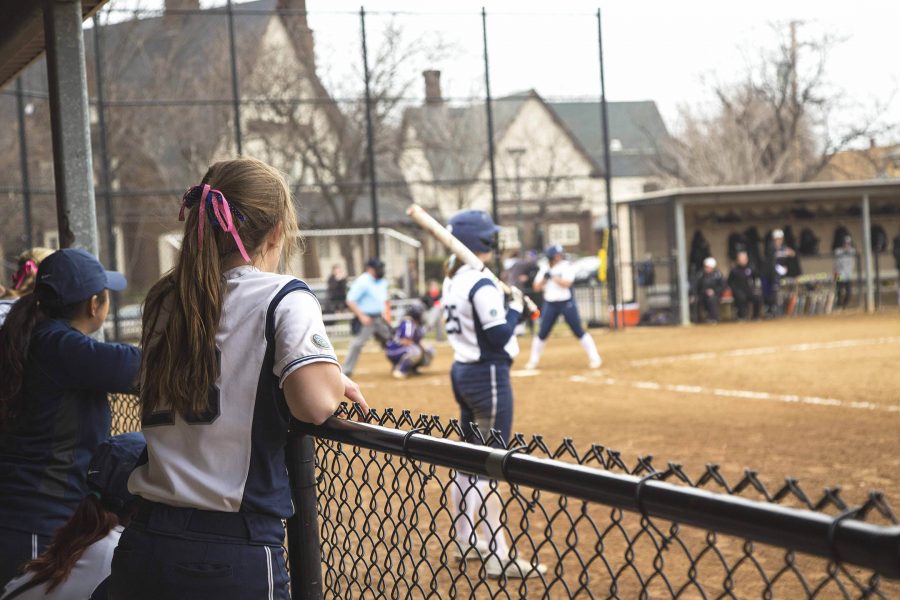 Walk-up songs are an important part of a batter’s preparation before they go up to bat.

Softball is a game full of decisions. What pitch should I throw? Should we send the runner home? How should we defend a double steal? Those are just a few examples of the split-second decisions players and coaches are making every game. One of the most important decisions, however, comes before the game even starts.

It’s deciding what walk-up song to use. When playing at Mather Park, each member of the Spartans chooses a song to play to accompany them as they walk up to the plate. It blares over the loudspeakers for about 10 seconds as the player mentally prepares for the upcoming at bat. The song puts the player in the right mindset to do her job at the plate.

If you’ve ever wanted to know about the team’s songs, now is your chance. Thanks to fourth-year pitcher Annie Wennerberg, The Observer has compiled a guide to the Case Western Reserve University softball team’s walk-up songs. The next time to hear them is April 21 as the team takes on the University of Chicago.

Oh snap. Definitely one of the sexiest songs Fergie ever released, this is perfect for the hitter who swings her hips all the way to the plate, like the fleet-footed Wede. It’s got a danceable beat for sure, but the lyrics are a little vague. What is her London Bridge? I have spent the last 10 years wondering and I still have no idea.

Sia has proved that you don’t need a fast tempo and a synth to make a great walk-up song. This song is grand, in its layering of voices and the big band sound she is able to achieve. It feels like she has an army behind her that also believes she is unstoppable. Not unlike a player who has her whole team rooting for her success at bat.

What song is more iconic than California Love? I am hard pressed to think of one. This song is like summer on a hot day, in that it feels like you could put it on when it’s hot and feel cool. It’s definitely a good pick for the super chill Waldner.

This 2010 jam really takes me back to my youth. The fun beat and the feminist lyrics are really great to strut to. Tritchler is definitely making a statement about her independence and her ability. Hopefully she will be able to escape Miley’s fate.

Brantley Gilbert, “Kick It in the Sticks”

I am so happy that this playlist includes a country song. The genre really embodies everything I love about softball. It’s about brushing off the city slickers and getting in the truck and going out to be a tough country guy, or in this specific case, girl. It’s a powerful ballad for the strong-hitting Wennerberg.

“Believer” is a strong break from the sexy songs preceding it. It’s an alternative juggernaut similar to the sound Imagine Dragons achieved with “Radioactive.” Overall, the message of being unsatisfied with the current situation and wanting to change it is very appropriate for any point in the contest. We can believe in Carty’s ability to change the fate of the team with this song.

A song better known for its guitar solo than its lyrics, “Carry On Wayward Son” is a great change from all the music the team has chosen so far. Just like everything else we’ve heard it’s about not giving up and, obviously, carrying on. But Kansas conveys this message through their style of rock and roll that our parents knew and loved.

How do you make a sports playlist without this song? The surf melody in the beginning is overpowered by the unmistakable pop sound of the Black Eyed Peas. It makes you want to jump out of your seat and swing your arms and have a crazy middle school dance style good time.

The song that started it all. Destiny’s Child was our first introduction to Beyoncé and this was one of the most popular tunes the group ever released. And why wouldn’t it be? It’s a great R&B jam about not being stopped. She’s doing just fine without you, and she can win this game without your help.

If this song didn’t inspire your love of hideous fruit-flavored glosses in middle school you’re lying. A catchy melody under a really simple message gives this song a winning formula. It’s pure confidence, which Thornton will have after hearing it.

“Monsters” delivers what this playlist has been missing all along. It is a great punk rock anthem about being without while being within. It’s everything the angsty 13-year old inside us all loves. Including a sick guitar bridge and bashing drums. It’s a great way to embrace the power and spastic energy we all had in middle school.

When you hear walk up music at a major league game, it probably sounds like “Gasolina.” It’s a Spanish song with a strong synthetic drum in a head-bobbing tempo. The singer is definitely a tough guy as he spends most of the song yelling. But it sounds cool and powerful.

Sia, “Never Give Up”

Despite being the slowest tempo song on this list so far, Never Give Up is one of those songs that you’ll search for on your phone from the stands because it’s so darn catchy. Beginning with a slight Bollywood vibe, the song morphs into a drum-heavy melody that is an integral part of any Sia song. Definitely a great choice for a walk up song as it’s not only musically solid but it’s lyrics are really uplifting.

If you are sensing a Fergie theme here, you’re not alone. The iconic “Fergalicious” had to be on here as it is one of the staples of our middle school years when we all thought we were all that. This is definitely more of a sporty beat than “London Bridge,” and the lyrics are way more clear. She is an independent boss, and so is Carroll.

If the stands aren’t singing this after it stops playing I will be so surprised. It’s a classic, and I don’t think I can say anything that has not already been said. You’re humming it to yourself right now.

Jasmine Heusey is a programmer with WRUW-FM 91.1 Cleveland. She has been with the station for 3 years and loves all kind of music, even Miley.